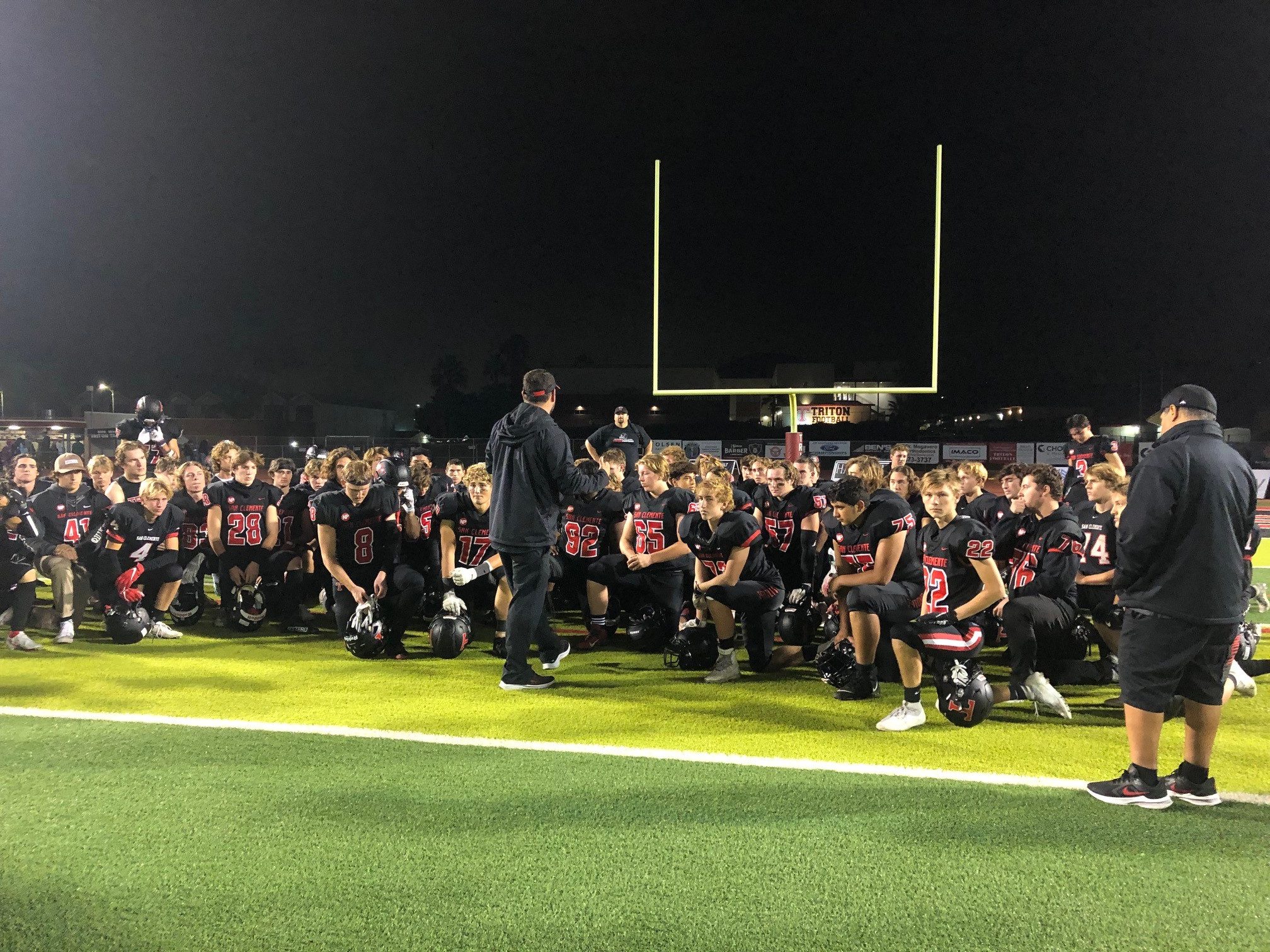 SAN CLEMENTE – It was as if the San Clemente football team and Roosevelt of Eastvale switched jerseys in the fourth quarter.

Through the first 36 minutes, the Tritons had a firm hold on the destiny of this game. By the end of the final 12 minutes, San Clemente was left stunned.

A raucous, festive and celebratory atmosphere at Thalassa Stadium had completely evaporated, and San Clemente looked on as Roosevelt stormed the field with a comeback completed.

San Clemente completely dominated the first half for a 21-point lead over Roosevelt, but the Mustangs ignited their passing attack in the fourth quarter and took advantage of two late interceptions to defeat the No. 4 seed Tritons, 34-28, in a CIF-SS Division 5 first-round game on Friday, Nov. 5.

“They got momentum on their side,” San Clemente coach Jaime Ortiz. “They made some really big plays, and we had a couple opportunities to extend drives and keep the clock in our favor, and we didn’t do that. At the end of the game, it came down to a couple close plays, and they made the plays, and we didn’t. That’s the bottom line.”

San Clemente (7-4) was playing in its first playoff game since the Tritons were removed from the 2019 playoffs ahead of the Division 2 semifinals due to an ineligible player. This season, San Clemente overcame mid-season pitfalls with dramatic nonleague wins and finished second in the South Coast League.

“It’s been my life for so long. I love all these kids,” San Clemente senior Tanner Mehrens said. “Football ends one day, but at the end of the day, it’s more than just playing pigskin. It’s family that we’ve created here, and it grows every year. I wouldn’t trade any of it for the world.”

Roosevelt (7-4) moves on to the Division 5 quarterfinals to host Rancho Cucamonga, who also won in a road upset at Saugus, 21-7.

Going into the fourth quarter, Roosevelt had leaned on its running game as the passing attack had been completely shut down. The Mustangs had completed only 1 of 9 passes for minus-2 yards and three interceptions through three quarters. San Clemente was in control.

Then seemingly out of nowhere, Roosevelt quarterback Julian Viramontes completed 8 of 11 fourth-quarter passes for 124 yards and two touchdowns, including a 28-yard TD pass and the game-tying 25-yard score with just over two minutes remaining.

“They were running the ball, running the ball, and we get sucked up a little bit,” Ortiz said. “Then the quarterback got hot. They have good receivers. Made a nice catch in the endzone when we had him bracketed. The did a good job distributing the ball around.”

Roosevelt also converted as many fourth downs in this game – four in five attempts – as it did third-down opportunities, where the Mustangs went four for 13.

The Tritons’ offense once again was stuck with unrealized second-half opportunities. San Clemente missed a field goal in the third quarter, couldn’t take advantage of a second interception by sophomore Drew Shanley and turned the ball over on downs after their own fourth-down stop of Roosevelt in the fourth quarter.

After Roosevelt tied the game, 28-28, the Mustangs turned up the pressure and forced two interceptions from San Clemente senior quarterback Lachlan Van Rosmalen, including the second pick coming with 34 seconds remaining.

Roosevelt capitalized on an extremely short field after the second interception, as Jaquez Neal ran in a 7-yard touchdown on the very next play to take the lead, 34-28. While the Mustangs air game struggled, Neal carried the load with 32 carries for 196 yards and three touchdowns.

San Clemente got five more plays, but the Roosevelt pressure continued with game-ending sack that sent the Mustangs to the second round and their bench streaming across the field to taunt the San Clemente student section.

“I don’t know what to feel yet, honestly,” Van Rosmalen said. “I’m sad for the seniors. I’m sure at some point I’ll be pretty sad for myself. I’m happy for the younger kids. We have a great younger class that are coming up. Very positive about the future, excited for those kids.”

San Clemente came out firing on all cylinders in this game with an 11-yard touchdown run by junior Blake Allen on the opening drive. The Tritons then got an interception by Shanley on Roosevelt’s third play, and Van Rosmalen threw a 32-yard touchdown pass to a wide open Cattich for a 14-0 lead.

Roosevelt ground out a 14-play touchdown drive in response with a 1-yard touchdown by Neal.

San Clemente went back up by two scores on a 19-yard touchdown pass from Van Rosmalen to junior Thomas Hartanov, and following back-to-back sacks by Mehrens on defense, Van Rosmalen connected with Cattich again on a 40-yard touchdown for a 28-7 lead into halftime.

Roosevelt scored on its opening drive of the second half with six straight running plays, including the 22-yard touchdown run by Neal.