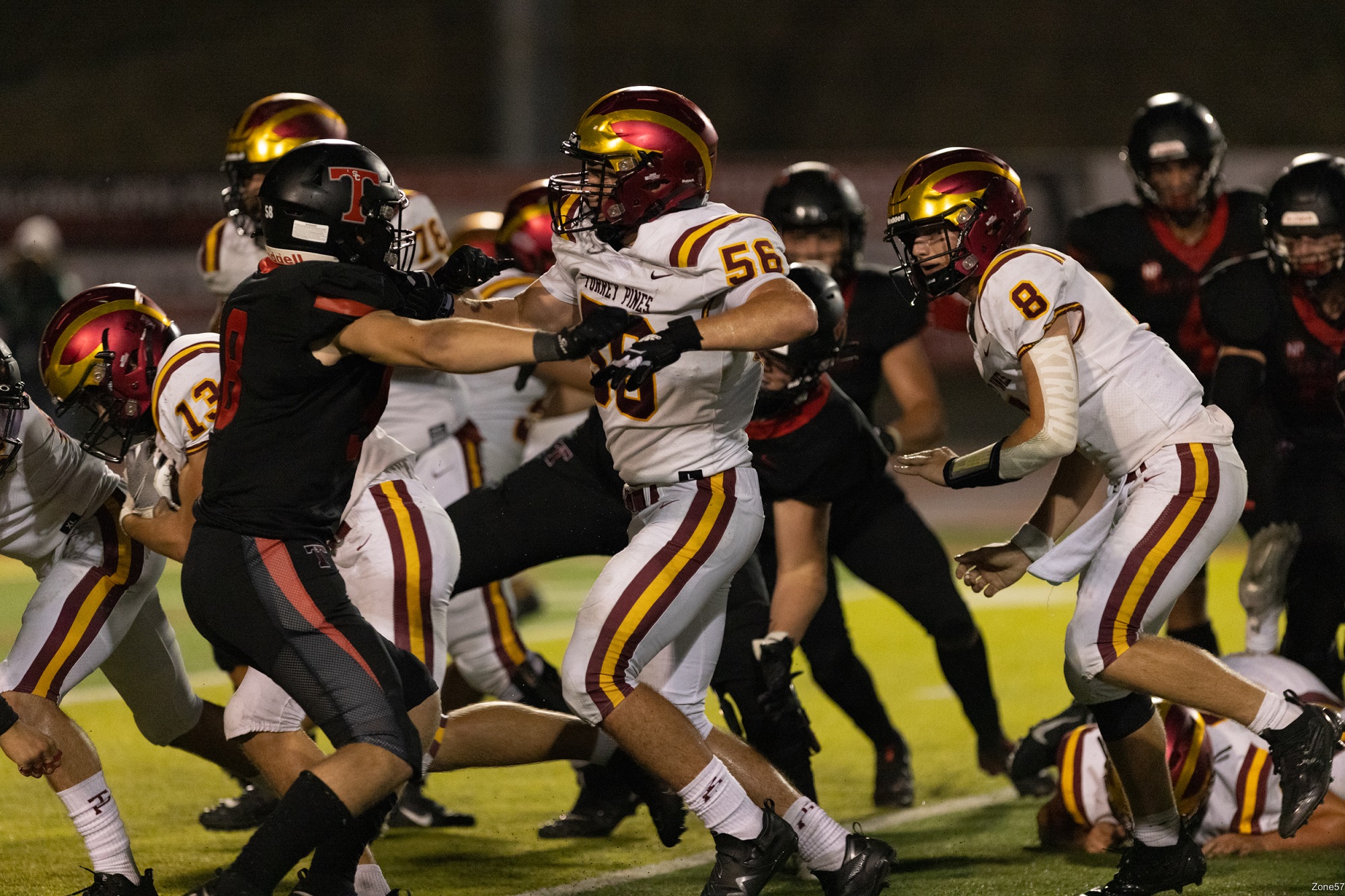 SAN CLEMENTE – As San Clemente and Edison locked horns in a physical brawl of unbeatens, it was the shortest yards that sparked the biggest swings on Friday night.

Edison turned two midfield, fourth-down stops into quick-strike touchdowns in the third quarter to separate from and hold off San Clemente, 21-16, on Friday, Sept. 16 at Thalassa Stadium.

“We’ve got to get those 4th-and-1’s and those plays,” San Clemente coach Jaime Ortiz said. “If I could go back, there’s probably some things I would change as a coach. I love the fact that we battled out to the end. That’s two good high school football teams going back and forth, and it came down to the very end.”

San Clemente (4-1) sustained its first loss and will travel to Murrieta Valley next Friday, Sept. 23. The Tritons will also be on the road the following week at Steele Canyon in San Diego County before a bye week ahead of their South Coast League opener back at home against Mission Viejo on Oct. 14.

However, it was Edison that finally hit the game’s two big passing plays, and both came after those fourth-down stops in the third quarter.

San Clemente led 9-7 midway through the third quarter and came up to a 4th-and-1 at the Edison 49-yard line. The Tritons attempted to push quarterback Broderick Redden through the line, but the Chargers closed the gaps to force the turnover on downs.

San Clemente’s next possession stalled at the Edison 37-yard line, and on a 4th-and-9, the Tritons went for it. The pass was almost intercepted, and the Chargers took over again.

“Honestly, that’s one thing I would change as a coach,” Ortiz said of the second fourth-down decision. “I told the players there were things I’d change as a coach. Maybe that decision, instead of pinning them deep, playing defense and forcing them to drive the field. But I challenged our offense in the second half. You have to make those close plays, and we didn’t do it tonight.”

Two plays later, Edison made San Clemente pay again with a 60-yard touchdown pass from Awad over-the-should and in-stride to Hurley for the two-score lead, 21-9, in the final minute of the third quarter.

“That’s one thing that in the beginning part of the season we did a good job of capitalizing on turnovers,” Ortiz said. “Tonight, they caught us.”

In the fourth quarter after the Tritons were again stopped on a 4th-and-1, San Clemente finally took advantage of another Edison turnover, as Brock Della Vedova recovered a fumble at the Tritons’ 34-yard line.

Allen burst forward on a 42-yard run that set up Redden’s second QB-sneak touchdown of the game to cut the lead to five points, 21-16.

San Clemente’s next drive was a 3-and-out, but the Tritons got some luck with another Edison turnover on a muffed punt. Connor Bachhuber recovered at the San Clemente 44-yard line.

However, the wheel of luck spun back to Edison, as the Tritons fumbled three plays later. San Clemente came up with its own 3-and-out of Edison and burned all three timeouts to get the ball at its own 32-yard line with 1:24 remaining in the game.

The Tritons converted one fourth down on a 14-yard pass from Redden to Thomas Hartanov and a third down on a 13-yard catch-and-run by Allen. However, on a 4th-and-15, Mason Ord was forced out of bounds on a 14-yard reception, and Edison made one last fourth-down stop to ice the game.

Hartanov returned the game’s opening kickoff 86 yards to put San Clemente in position for a 34-yard field goal from Kai Trager and the game’s first points, 3-0.

Edison responded with an 11-play touchdown drive to take the lead in the first quarter, 7-3, but San Clemente eventually struck again in the second quarter.

First, the Tritons were denied points, as Edison forced and recovered a fumble at its own 4-yard line. However, San Clemente forced 3-and-out, and the Chargers punted from their own end zone. The ensuing punt ended up taking two huge San Clemente bounces backwards, and the Tritons set up at the Edison 20-yard line.

San Clemente got its score after a 14-yard reverse run by Hartanov and a 1-yard sneak by Redden for the 9-7 lead that the Tritons took to halftime.

San Clemente held Edison to just 37 passing yards at halftime, which was a big early win against what had been a potent Chargers air attack this season. Ryder Insley and Brad Gerken were leaders in the secondary’s coverage.

“We were moving our coverage around and giving different looks, trying to confuse the quarterback a little bit,” Ortiz said. “And our kids were physical. They’ve got some big, tall receivers, and our kids were trying to be physical with them, re-route them.”

Awad eventually completed 12 of 20 passes for 172 yards and two touchdowns.