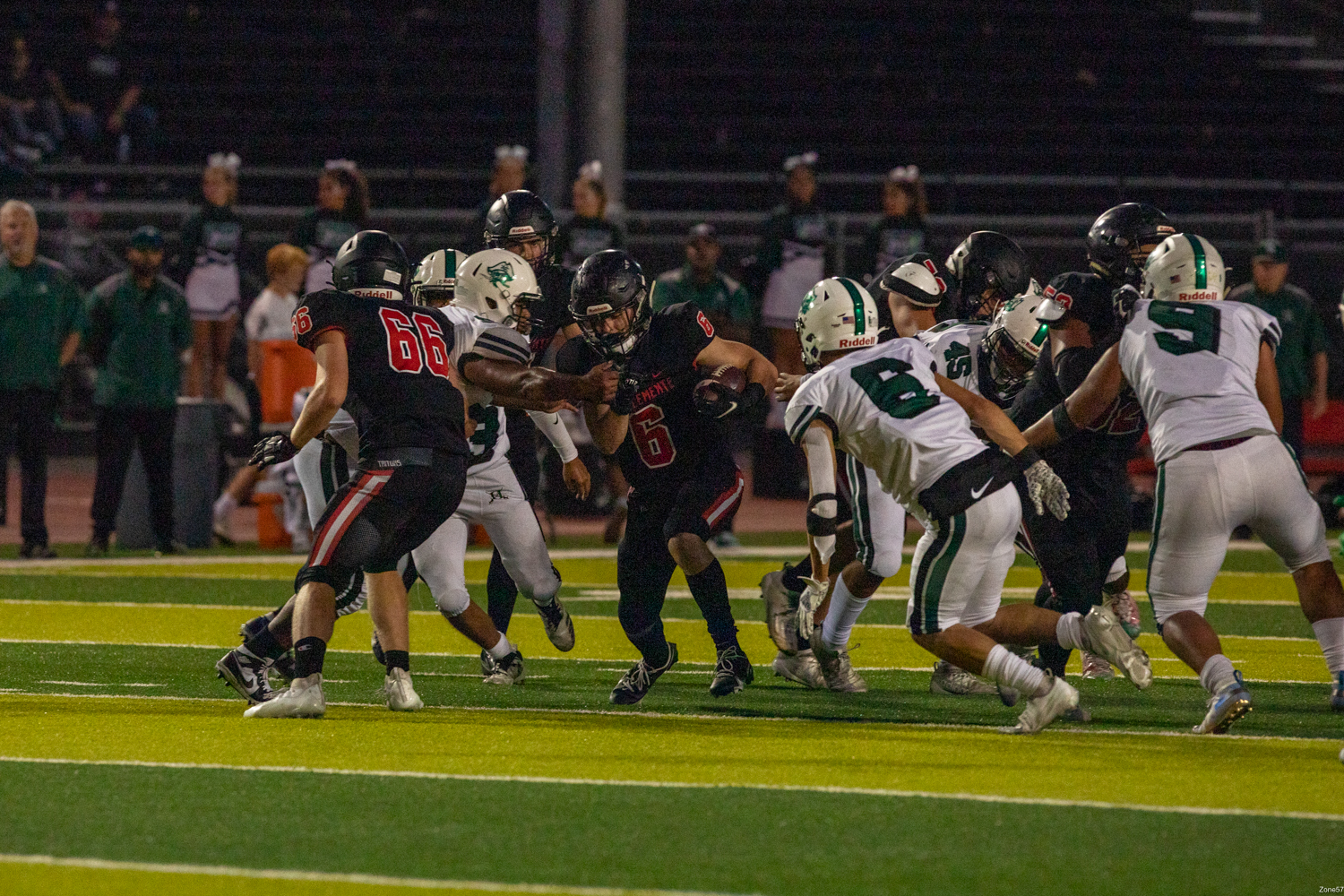 SAN CLEMENTE – For the third straight week, the San Clemente football team was locked in a defensive slugfest, and for the first time this season, the Tritons couldn’t find any late offensive magic.

In a battle of unbeatens, San Clemente held Corona del Mar well under its early high-scoring averages, but the Sea Kings scored on their opening drive of the game and put up their own strong defensive front to hand San Clemente its first loss of the season, 7-3, on Friday, Sept. 10 at San Clemente High School.

“They made the plays when they had to, and we didn’t,” San Clemente coach Jaime Ortiz said. “That’s the bottom line. We had opportunities. Offensively, we have to be more consistent.”

San Clemente (3-1) stays with tough Orange County beach-town competition next Friday, Sept. 17, as the Tritons travel to take on Edison at Huntington Beach High School. Edison is 2-2 after a 49-10 win over Palos Verdes on Friday with the Charger’s two losses coming to Trinity League teams – 54-14 against nationally ranked Servite and 23-21 against Orange Lutheran.

Going into Friday’s game Corona del Mar (4-0) was averaging over 44 points per game and over 330 yards per game through their first three contests, but San Clemente had only allowed 19 points through its first three games. San Clemente’s defense won out and held the Sea Kings to just 194 yards and a fumble.

“We had some good tendencies on them (Corona del Mar),” Ortiz said. “The kids battled and swarmed to the ball. At times, we imposed our will on the line of scrimmage, and at times, they imposed on us. We played around the ball really well. It would’ve been nice to make one more play.”

However, despite a 34-point showing in their opener over Oceanside, the Tritons offense has struggled, with just three touchdowns in their last three games. San Clemente gained 170 yards of offense against Corona del Mar.

“We just have to be more consistent, and we need to go finish drives,” Ortiz said. “We’re getting the ball inside the 30 or 40 line, and then we stall.”

Corona del Mar came out swimming as Rasor connected with Lane on a 31-yard pass on the Sea Kings’ first drive – one of only three passes by either team longer than 12 yards. Rasor found Tipton on the 3-yard score to go ahead, 7-0, with four minutes left in the first quarter.

San Clemente was in position to respond and put points on the board with a 35-yard field goal, but Corona del Mar blocked the attempt at the start of the second quarter.

From there, neither team could sustain a drive, and while San Clemente nearly had a pick-six opportunity at the end of the first half, the pass was merely tipped and caught to run down the time.

Coming out of halftime, San Clemente forced a fumble on the opening drive, and Reese McDonald recovered at the Corona del Mar 33-yard line.

San Clemente seemingly tied the game on a four-yard pass from Van Rosmalen to Easton Cattich, but the Tritons were called for holding to negate the score. The Tritons settled for a field goal, and this time, Sean Harry’s 33-yard kick was true to put San Clemente on the board, 7-3.

Through the third and fourth quarters, the field position game continued with both teams dropping passes or simply meeting resistance from the opposing side.

Late in the fourth quarter, San Clemente was losing its remaining runway and went for a fourth down at midfield. Corona del Mar defended the pass and took over on downs.

The Sea Kings iced the game with a 42-yard pass from Rasor to Lane that put Corona del Mar at the San Clemente six-yard line with two minutes remaining. With San Clemente out of timeouts, Corona del Mar elected not to push for the end zone and ran out the clock to earn the hard-fought win.