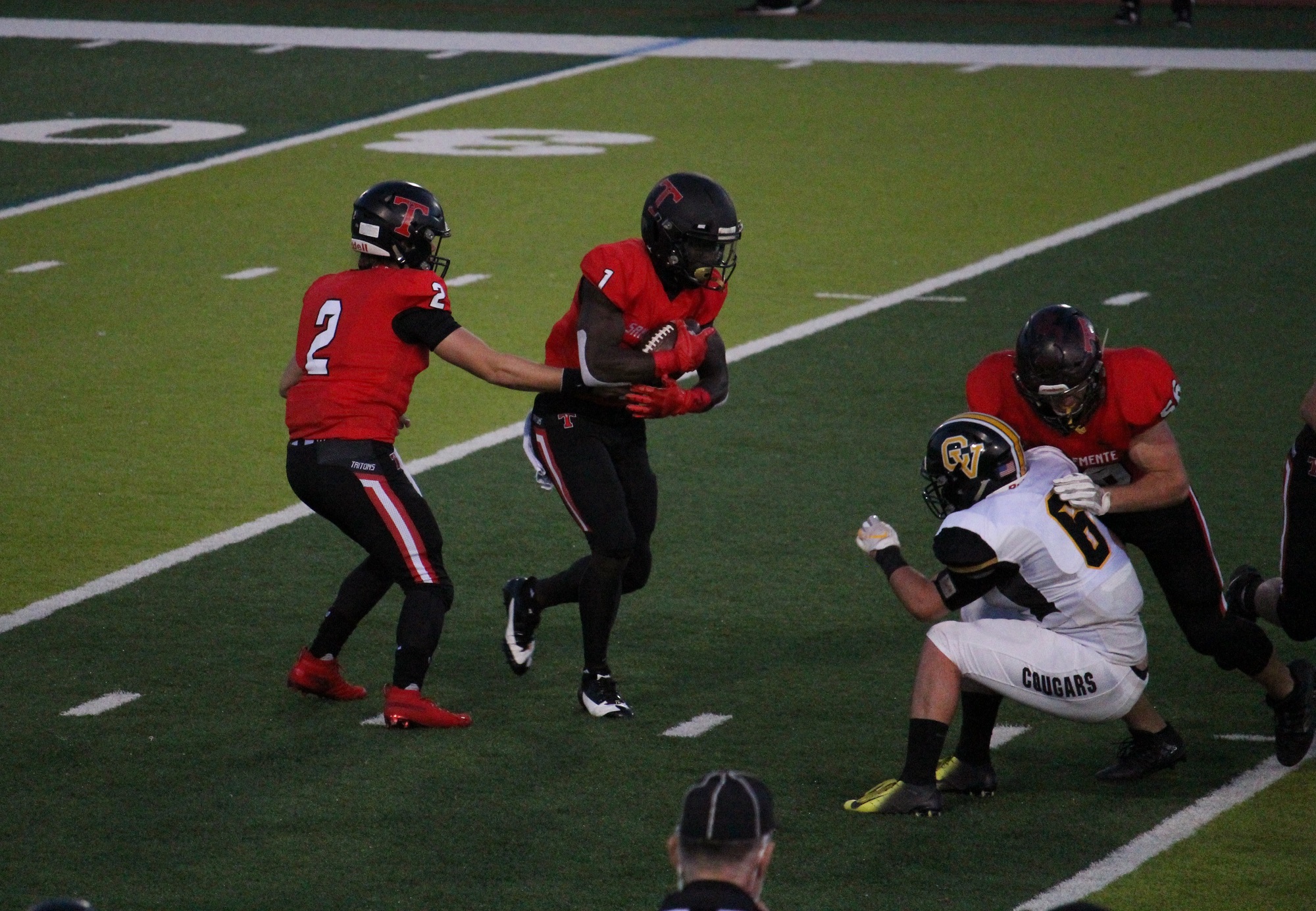 It was both teams’ first game in more than 16 months, and it certainly showed in places.

Both teams would tell you it was a win to simply be out there, but only one team secured the victory on the scoreboard.

Junior Lachlan van Rosmalen threw for three touchdowns and 193 yards and completed 15 of 28 passes in his debut at quarterback for the Tritons (1-0), and senior James Bohls scored two touchdowns and ran for 85 yards on 10 carries.

The Tritons had not played a football game since the CIF-SS Division 2 quarterfinals on Nov. 15, 2019. San Clemente won that night, but the following Monday, the Tritons were removed from the CIF-SS playoffs due to an ineligible player and had to forfeit of the entire season. A legal battle played out through that week, but the ruling against San Clemente officially held in court on Nov. 22, 2019—the morning of what would have been the Division 2 semifinals.

After pushing through the restrictions of the coronavirus pandemic, practicing since Aug. 25 and having the season delayed twice, there was palpable excitement in the air in front of the socially distanced, family-only crowd at Thalassa Stadium. However, things didn’t open for San Clemente as expected.

San Clemente’s decent opening drive stalled, as the snap on a field-goal attempt went high, and the ensuing broken play resulted in an incomplete pass and turnover on downs. The Tritons held Capistrano Valley (0-1) to a three-and-out, but San Clemente followed with its own three-and-out.

Two pass interference penalties against the Tritons kept the next Cougars drive alive, and Capistrano Valley completed a 23-yard touchdown pass on the first play of the second quarter to take the lead, 7-0.

The pass interference penalties proved to be a theme throughout the game, as both teams combined for more than 230 yards in penalties, with six pass-interference calls.

San Clemente was intercepted on its next possession and went out on a four-play drive on its next time with the ball. Capistrano Valley took out chunks of yards in the air and ran in a two-yard touchdown for the 14-0 lead late in the first half.

Senior Ashton Whitsett returned the ensuing kickoff to the San Clemente 45-yard line, and the Tritons had a spark. The Tritons earned first downs on three consecutive plays, and the Arizona-bound Bohls scored on a two-yard run to get San Clemente on the board, 14-7, with less than two minutes to play in the half.

The Tritons opened the second half as perfectly as they could have planned.

Senior Zachary Brunson intercepted Capistrano Valley on the third play of the half, and Bohls capitalized on the Tritons’ next play, as he broke away for a 39-yard touchdown run to tie the game, 14-14.

Capistrano Valley went three-and-out on its next drive, and disaster struck as the punt snap went over the kicker’s head and was downed at the Cougars’ 2-yard line. The full meltdown was avoided, though, as San Clemente couldn’t get into the end zone and missed a 20-yard field-goal attempt.

Capistrano Valley regained the lead, 17-14, with a 30-yard field goal on the next drive, but from there, San Clemente found its stride.

Whitsett found a groove in the running game, and after some early incompletions, van Rosmalen assumed the Triton quarterback mantle.

The Tritons locked down Capistrano Valley on a fourth-down attempt, and San Clemente put the game on ice on the next drive. Van Rosmalen hooked up twice with junior Easton Cattich on a 19-yard pass and a 23-yard touchdown pass for a 35-17 lead with just more than two minutes remaining.

The Cougars kept up their fight and threw a touchdown pass with 10 seconds remaining to lock in the final score at 35-24. Capistrano Valley quarterback Dart Moussiaux completed 26 of 47 passes for 325 yards and two touchdowns.

Players on both teams wore “JW” decals on their helmets and held moments of silence before their games. San Clemente went a step further by going out on its opening play with only 10 players and no one at the running back position. The Tritons took a delay-of-game penalty, and Capistrano Valley declined the penalty.

Though San Clemente hosts Aliso Niguel this week, the teams agreed to not have another ceremony for Wood. San Clemente coach Jaime Ortiz said they didn’t want the players to go through those emotions twice after both teams honored Wood in their openers.