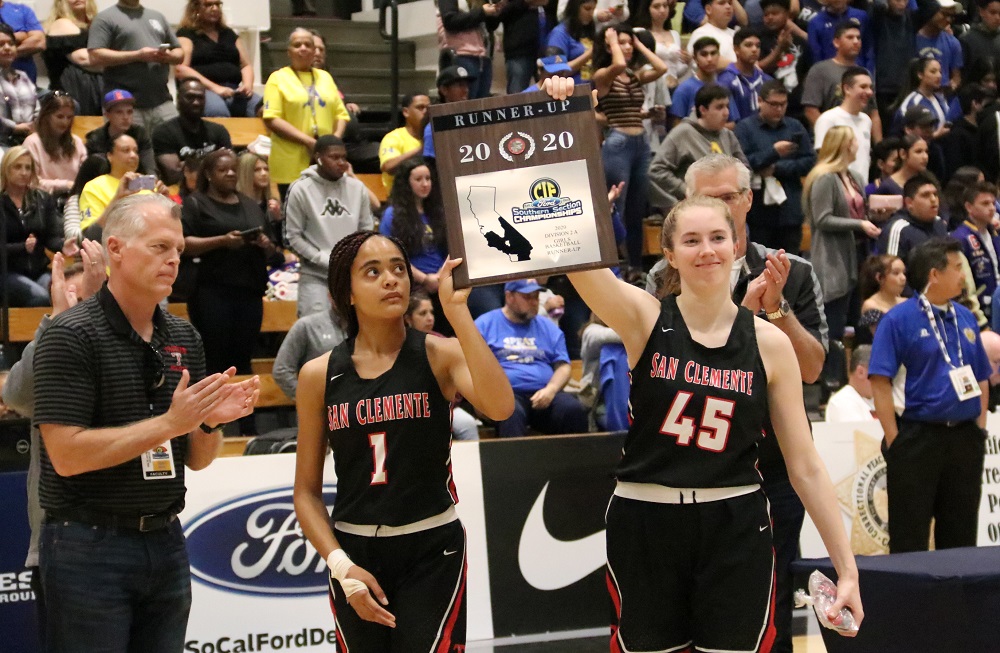 AZUSA – It wasn’t the start or the results that the San Clemente girls basketball team wanted, but the No. 1 seed Tritons showcased a fight and a bond worth celebrating in the CIF-SS Division 2A title game that will carry them into the next chapter of the postseason.

Bishop Amat led by as many as 15 points in the second quarter and 12 points at halftime, but the Tritons pushed back with a strong defensive third quarter to eventually take a one-point lead late in the fourth quarter. However, Bishop Amat capitalized on free throws and hit a dagger 3-pointer to claim the Division 2A championship, 48-43, on Saturday, Feb. 29 at Azusa Pacific University.

“I’m just so proud of my team for the fight they showed to come back in that second half,” San Clemente coach Kerri Husbands said. “They really turned it into a game once we settled down. I’m glad that we have the state tournament to look forward to, because this is not how our story ends.”

San Clemente (27-4), which was playing in its first CIF-SS championship game since 2007, still moves on as a qualifier for the CIF State Regional tournament. Brackets will be released on Sunday, March 1 and play begins on Tuesday, March 3.

“Every single one of the girls didn’t have the mentality that we lost this game,” Gardiner said. “My freshman, sophomore, junior year, I think we had strong teams, but I never had such a united team that we have. Every single girl, even if they don’t play, has such a team mentality. This team is so powerful because every single girl has our backs.”

Even Blaine, who transferred to San Clemente from Virginia after a move with her military-based family, felt the team’s strong camaraderie from the start of the 2019-20 campaign.

“The chemistry and the bond this team has made is just incredible,” Blaine said. “Coming in as an outsider from California, my first impression of San Clemente was this basketball team. They embraced me and put me into their team that first scrimmage. From that point forward, it was a unique relationship that was built between me and the rest of the players.

“It’s that bond that is going to send us even farther,” Blaine said.

Gardiner led San Clemente with 12 points and added 12 rebounds and four blocks. Blaine was a physical force with 16 rebounds and six points. Johnson also pulled in double-digit rebounds with 11 and scored six points.

The first half, and particularly the first quarter, is a period the South Coast League champion Tritons would like to forget.

Bishop Amat was on fire with three 3-pointers on eight attempts, while San Clemente went 0 for 4 from beyond the arc and 2 for 13 from the field. The Lancers sped out to a 12-point lead after the first quarter. The teams played a fairly even second quarter to maintain the 12-point difference at the half.

“I think we just had to absorb the moment for a second,” Husbands said. “We blinked and we were down 10. Just getting back to what we do well, stepping up our defense, that was the big thing. Our defense really stemmed the turnaround.”

San Clemente then held Bishop Amat to only four points in the third quarter, while Gardiner helped spark the comeback with six points as the Tritons up their physicality. San Clemente outscored Bishop Amat 14-4 in the quarter for a two-point deficit going into the fourth quarter.

Bishop Amat knocked down a 3-pointer to open the fourth quarter, but the Tritons weren’t deterred.

San Clemente went on a 9-2 run to tie the game with a Kyra Stewart lay-up and take the lead on a free throw from Gardiner. Gardiner blocked a shot on the possession before her free throw.

However, Gardiner’s afternoon ended on the next possession as she collected her fifth foul on a Bishop Amat 3-point attempt. Bishop Amat sank all three free throws to take a two-point lead.

With Bishop Amat leading 43-41, San Clemente put up an expert defensive possession, but as the shot clock wound down, the Lancers put up a 3-pointer in a crowd of San Clemente arms and sank it for a five-point lead with 40 seconds remaining.

San Clemente got one more basket from sophomore Riley Brown, who scored seven points, but Bishop Amat nailed its free throws to ice the game and the title win, 48-43.

Bishop Amat won its sixth CIF-SS championship and first since 2012.

San Clemente has a young group that could be right back in this spot next season. Of the six Tritons that scored a point on Saturday, only two were seniors, Gardiner and Esther Mafouta, who scored four points.

The Tritons have a bevy of sophomores including Johnson, Riley Brown and her twin sister Haley. San Clemente also had two freshmen on its varsity roster and only two juniors in transfers Blaine and Stewart.