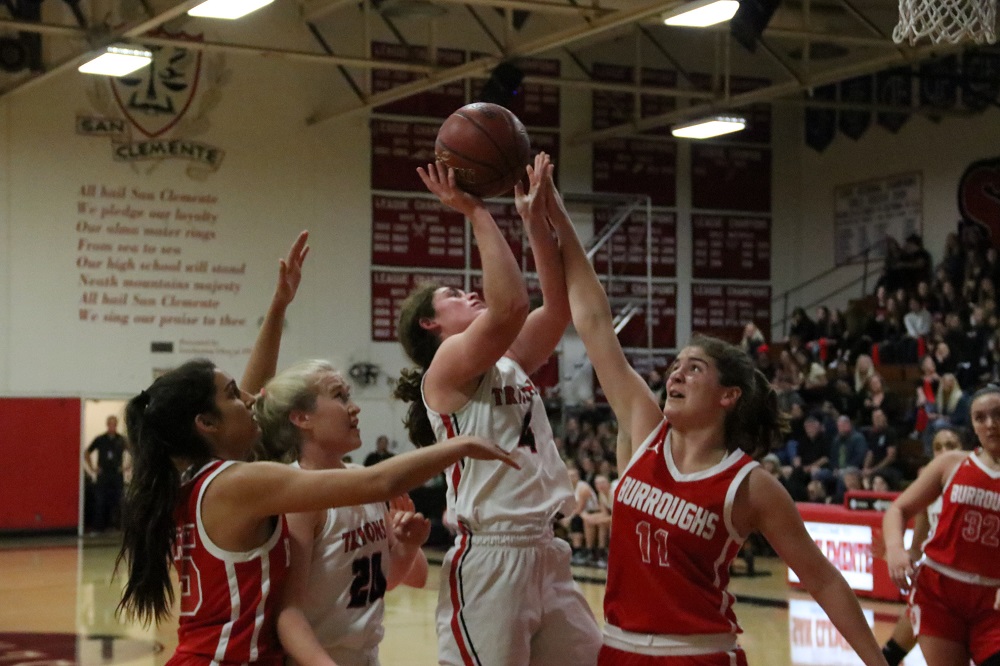 SAN CLEMENTE – Through two and a half playoff games, the top-seeded San Clemente girls basketball team looked like everything a No. 1 seed should be and looked ready to cruise to the CIF-SS Division 2A championship game.

However, Burroughs of Burbank turned it on in the second half of the semifinals on Saturday night and made the Tritons earn their spot.

San Clemente fought through the aggressive press of fourth-seeded Burroughs, withstood a comeback push and made key plays in the fourth quarter to survive a semifinal test, 41-29, and advance to the Tritons’ first CIF-SS championship game in 13 years.

“They (Burroughs) were tough defensively, we knew going in it was going to be a defensive match-up,” San Clemente coach Kerri Husbands said. “They made a great adjustment, really started pressuring. Happy to survive.”

San Clemente will play Bishop Amat of La Puente, which beat No. 3 seed Peninsula, 66-52 in the other semifinal, in the CIF-SS Division 2A championship game on Saturday, Feb. 29 at Godinez High School in Santa Ana, Colony High School in Ontario or Azusa Pacific University. Game site and time will be announced on Monday, Feb. 24.

San Clemente will play in its first CIF-SS championship game since its last championship title in 2007. The Tritons’ 2007 title was the fifth in seven seasons for San Clemente under CIF-SS Hall of Fame coach Mary Mulligan-Crapo, which included four straight from 2001-04.

San Clemente received a standout performance by an under-the-weather Jessie Blaine. The junior Auburn softball commit delivered a game-high 14 points and 12 rebounds while battling an illness.

“She’s such a competitor,” Husbands said. “We’re really worried about her. She went home after shootaround and had a four hour nap. She’s always going to give us everything she’s got. Tomorrow, she’s probably going to be exhausted.”

Senior Jolie Johnson had a physical game as she got knocked around, dove down and fought all over on nearly every loose ball and knocked down 11 points, including seven key points in the fourth quarter.

“Jolie was awesome,” Husbands said. “She’s really been coming on strong. She’s always like that (playing physical). You should see her at practice!”

Senior star Ella Gardiner was held to just four points, all in the first half, but the Fairfield volleyball commit played an instrumental role as Burroughs turned up the press in the second half.

“Ella helps bring the ball up (against the press,” Husbands said. “Between her and Jolie, it makes them really hard to press when they can see over the top.”

San Clemente executed well out of the gates with a 13-6 lead after the first quarter and a 12-4 second quarter for a 25-10 lead at halftime.

Burroughs went to that aggressive press out of the break and nearly turned the tide of the game. The Indians forced turnovers and answered with their own 12-4 third quarter to cut the deficit back down to seven points.

However, in the fourth, San Clemente slowed the game down and grinded against the press. Burroughs wore down and couldn’t keep up the full force of their press as Johnson’s baskets and a 3-pointer from Kyra Stewart nailed down the win for San Clemente.