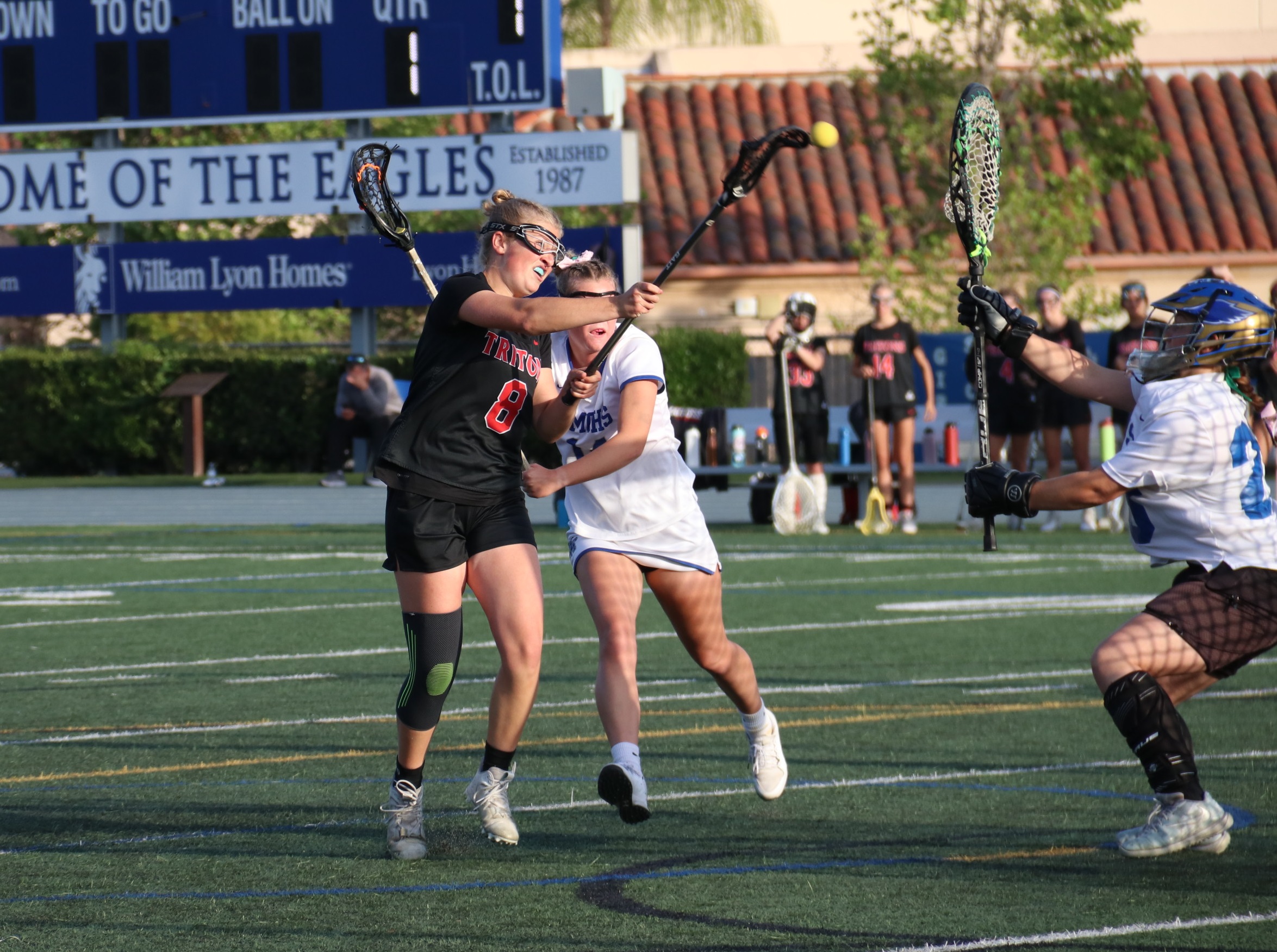 San Clemente girls lacrosse put together what may have been its most impressive regular season in program history in 2022, but the Tritons’ CIF-SS playoff opener on Tuesday, May 3, showed that the program still has room to grow to compete among the elite.

San Clemente was heavily out-possessed, as Santa Margarita won the first 15 draws of the game and scored five unanswered goals to end the first half on its way to a 13-5 victory in a CIF-SS Division 1 first-round game at Santa Margarita Catholic High School.

The third-seeded Eagles (17-2) advance to the quarterfinals on Saturday, May 7, at No. 2 seed Redondo Union. The loss ended the Tritons’ (14-2) South Coast League championship season, during which they thoroughly dominated nearly every opponent they faced outside of their two losses—both to seeded Division 1 competition.

“Our team is really young,” San Clemente coach Joshua Cain said. “We have a senior-heavy defensive crew that will be graduating, but about a third of the starters are freshmen. This is a great experience for them to play against a senior-heavy team and see where we’re trying to get to and the intensity they played with.”

Tuesday’s game marked the first time all season that San Clemente had allowed double-digit goals against, and only the second time the Tritons hadn’t scored at least 10 goals. Over the course of the season, San Clemente outscored its 16 opponents by an incredibly wide margin, 217-93, with its closest game coming in a 10-9 win over Newport Harbor on March 15.

San Clemente had even seemingly proved itself capable of hanging with the elite of Division 1. The Tritons’ only other loss this season came against reigning CIF-SS champion and Division 1 No. 1 seed Foothill, an 8-6 decision on March 24.

However, San Clemente hadn’t faced a team as strong on the faceoff draws all season as Santa Margarita, and even as the Tritons opened the scoring, the Eagles controlled the pace and attack time of the game by claiming all 11 first-half draws and the first 15 draws of the game.

By the time San Clemente won its first draw eight minutes into the second half, Santa Margarita already had an 11-3 lead.

“We couldn’t get the ball to a predictable placement in the first half,” Cain said. “In the second half, it was a lot better for us, but by then, we’re down by a little too much, so it was a difficult to fight back on.”

Still, San Clemente had an incredible season to look back on for the senior-heavy defensive core and take forward for a much younger offensive front. The Tritons went unbeaten in the South Coast League for the fourth time in the past five full seasons, and San Clemente qualified for the elite eight-team Division 1 bracket.

“At the start of the season, our goal was hopefully to win league, and we weren’t even thinking we were going to be in the top eight,” Cain said. “So, for us to battle all the way through and play a really close game to Foothill and get all the way here, we blew (away) all of the expectations and goals we set early for ourselves.”