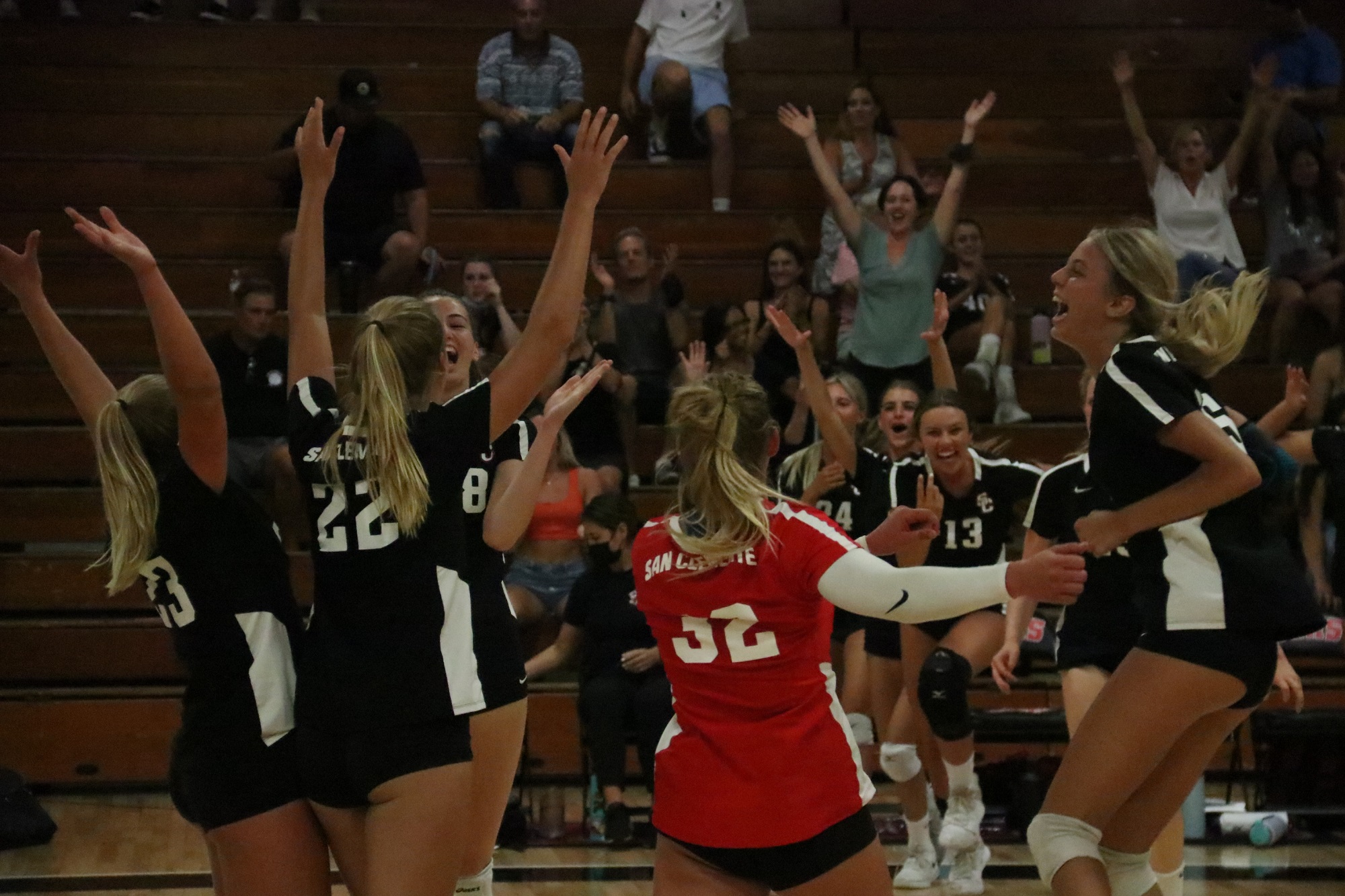 Tuesday, Aug. 17, was the start of “normal” for San Clemente High School and the Tritons’ athletic department.

It was the first day of school, followed by the first varsity athletic contest of the year. A couple firsts in what hopes to be a full and regular schedule for the 2021-22 campaign.

There were still masks indoors on campus during the day, and masks in the gym that night. On the whole, though, everyone and everything was back where it should be, and those on hand enjoyed a raucous return by the San Clemente girls volleyball team.

“We came out there knowing we would pull through,” San Clemente senior Riley Brown said of the fifth set. “We knew we wanted to win, and we knew we wanted it more than Tesoro. I think it came down to working with each other and the energy we had in the last game.”

Brown credited the celebratory energy from her teammates in the crowd as she served the final nine points for the Tritons, including an ace coming out of Tesoro’s second timeout of the set.

While the match had played quite evenly, San Clemente seemed to be ready to end it in the fourth set. The Tritons went up 20-14 with a 6-0 run that carried through a Tesoro timeout on the energy of San Clemente’s front line play. However, Tesoro countered with a 7-1 run to tie at 21 and eventually won the set, 25-23, to force that fifth set.

“I felt the fourth set was one of those even-fight type of matches,” San Clemente coach Casey Swenson said. “We had the lead, but I felt that both teams were playing so steady that anything can happen. The fifth was more just having confidence in what we can do, know we can execute. But they were doing a great job of bouncing back all night.”

For many of the Tritons, this was the first match in front of a full crowd in their high school careers. Last year, the girls volleyball season was delayed three times due to the pandemic, and while other fall sports like football and boys water polo got to start and play abbreviated league seasons, girls volleyball was left on the sideline as an indoor sport.

San Clemente’s girls volleyball team eventually worked out a way to play some games outside on the sand in Newport Beach, before state and local rules finally allowed them in the gym. However, the return came with only days left on the CIF-SS calendar for the sport, and the Tritons only managed a quick handful of games indoors.

“The biggest thing (learned from last season) is that everybody is so grateful for this opportunity and they know how fleeting it is,” Swenson said. “They know how special it is. This is the first day of school, and these girls got their classes and finding out who their teachers were. You’ve never seen a group of kids more excited to go to school the next day.”

San Clemente next plays at Laguna Beach on Thursday, Aug. 19 before taking on the Tesoro tournament on Friday and Saturday, Aug. 20-21. The Tritons are next at home on Aug. 26 against Los Alamitos.