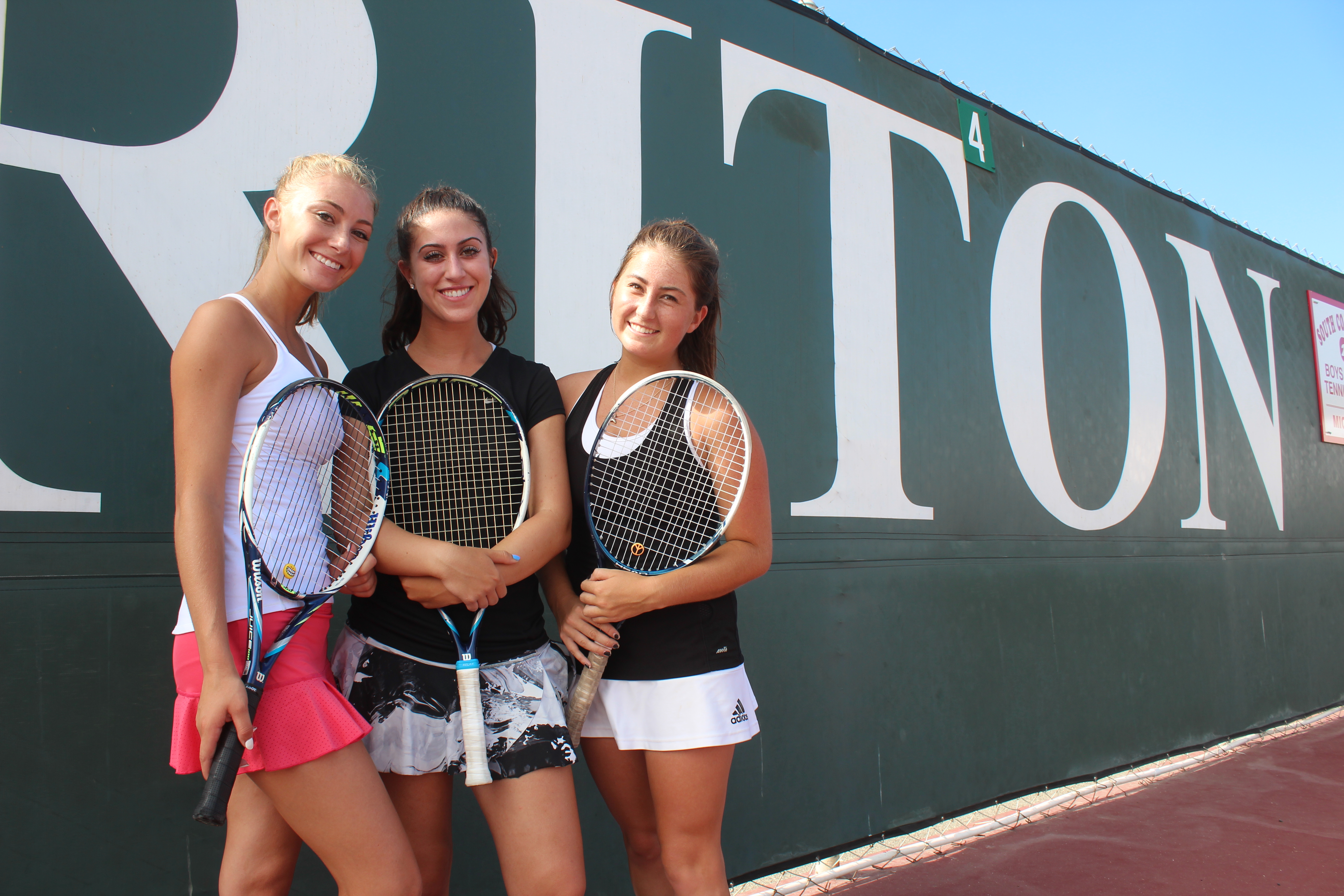 The 2016 fall high school sports season has begun, and several San Clemente High School teams are primed for big seasons. In our annual preview, we get you caught up to-date on all the Triton teams.

For in-game updates, scores, news and more for all of the teams, follow us on Twitter @SouthOCsports.

The San Clemente boys cross country team graduated its largest senior class in school history this offseason, which has allowed a large group of freshman and sophomores to step into contributing roles early in the season.

Head coach Dan Johnson said that four of his top-seven runners are currently freshmen and sophomores.

Not all of the Tritons depth from last season graduated, however. Senior Carlos De Jesus, who was among the team’s top runners last season, returns. Johnson said De Jesus has been setting the tone for the young Tritons squad in the offseason, and is already posting three-mile times in the low 16-minute mark.

“He’s got a motor like I’ve never seen before,” Johnson said of De Jesus. “Whatever you throw at him, he just does it and does it twice as much as you would expect.”

Sophomores Elijah Sech and Harry McKnee, along with freshmen Conrad Cullins and Zach Miller, are positioning themselves to be in the Tritons’ top-7.

The San Clemente girls cross country team will enter the new season with a handful of strong runners that will anchor the group and pick up valuable points. The Tritons return their top runner from last season, junior Chandler Horton, as well as returners Amy Vollebregt and Christina Beaulieu. The Tritons’ top trio became a top quartet this offseason, as freshman Belle Sachse impressed in summer workouts and has already broken into the team’s top-4 pack.

The Tritons top group of 15 runners made a point of staying busy this offseason, according to coach Dave Proodian. The top runners competed in multiple 5K’s in the area, and went to Mammoth for a summer training camp, which Proodian says has them in good shape to start the season.

“It will be interesting to see how we do (in league). It’s not going to be a walk in the park by any means. Every team has two or three good runners,” Proodian said. “I think anyone has a shot at going No. 1 (in league).”

Following the addition of a freshman tournament player and a bevy of experience throughout the roster, the San Clemente girls tennis team is reloading for another successful season.

The Tritons return two of their three singles players from last season, including Lindsay Hung, the reigning South Coast League singles champion. Hung also advanced to the Round of 16 at the CIF-SS Individual Championships as a sophomore. Samantha Neilson, an experienced singles player, also returns. Freshman Jenna Yeam, a young player with tournament experience, has stepped into a starting singles role.

The Tritons are still mixing and matching some players to fill out their doubles rotation, according to head coach John Stephens. But the group will be anchored by Jasmine Safavieh, a three-year player, Avery McBride and Ariana Safavieh, who are all returning starters.

“It’s pretty easy to mix them up and have them play with different partners because of their personalities and attitudes. They’re willing to do that,” Stephens said.

San Clemente is already off to a good start in 2016, having picked up wins over Santa Margarita, Capistrano Valley, Tesoro and Huntington Beach. In their three most recent wins, against the Cougars, Titans and Oilers, the Tritons have won 52 of a possible 54 points.

For two consecutive years, the Tritons have split the South Coast League title with rival Dana Hills. With both teams returning experienced rosters, Stephens expects the two to contend for the title for a third straight season.

In its first match of the season, the San Clemente girls volleyball team was put to the test.

Because of league realignments, the Tritons’ longtime rival, Dana Hills, was moved out of the South Coast League. Not wanting to end the tradition of the two teams battling it out on the court, Tritons’ coach Tom Beard scheduled his team to play the Dolphins in the season opener. The crowds showed up to watch and the atmosphere was electric.

Dana Hills got the better of San Clemente and swept them in three games. Although they lost the match, Beard believes it was a great chance for the young Tritons team, which returns just six players, to learn how to deal with adversity.

“The (Dana Hills) crowd came out and they were barking in their ears. It was like an important league game or even a CIF game,” Beard said of the Dana Hills match. “It was the first time for some of our girls to experience that from the floor. They didn’t fall apart at any point, and that’s a really good sign.”

The tough opening match will set the tone for the rest of the Tritons’ schedule, which is dotted with top-level opponents in preparation for a run through league. San Clemente split the league title with San Juan Hills in 2015.

Senior Cassie Stewart is the Tritons most experienced player, and will be making a move from middle blocker to outside hitter this season. Stewart, a four-year varsity member and three-year starter, was third on the team in kills last season and led the team in blocks with 46.

The San Clemente boys water polo team will be under the guidance of a familiar first-year head coach this season. Logan Powell, who has spent the past nine years as an assistant to longtime former coach Marc Parker, takes over the program he once played for.

Powell, a SCHS grad who also coaches the girls team, will be leading a Tritons team that has a mix of experienced and young players.

Normally there is an adjustment period when a program has a new head coach, but that transition has been eased by Powell’s presence. Already familiar with the Tritons players and system, Powell was able to hit the ground running during the offseason and instill a new team-oriented approach to the game he believes his players are embracing.

Returning players Sean Edwards, Nathan Benge, Joshua Mourer, Brevin Hosea and Parker Mudge give the Tritons plenty of experience at the field positions. The roster got a boost with the addition of newcomers Jared Powell, Riley Pfieffer and Alex Lunt, a transfer from Capistrano Valley. Goalies Noah Carter and Trey Westbrook are currently splitting time at the position.

In year’s past, the Tritons have relied on a few standout players to help them win games. Powell wants this year’s team to be more rounded and get contributions from up and down the roster. San Clemente has yet to play a game, and will open the season against Los Alamitos on Sept. 8.

“They’re starting to come together more and more as a team and I think that’s going to pay dividends for us,” Powell said. “We had a pretty good summer and I feel like we’re improving. We’re excited for the year.”

Parker is making the transition from the pool to the links, having served as the Tritons’ head boys water polo coach in year’s past. While the two sports could not be more different, Parker retained all of the Tritons’ golf assistants from last season and said the transition has been easy.

Leading the way for the Tritons is Olivia French, a returning starter who currently holds a scoring average of 38. Erica Cornelius and Julia Kalez, along with French, currently make up the Tritons top-3 players.

Both French and Cornelius possess different skill sets, which has led to an effective one-two punch.

“Olivia is very consistent and eliminates big mistakes and stays in control,” Parker said. “Erica has the ability to hit the ball a long distance, which gives her a chance for low scores and puts pressure on the other teams.”

Four freshmen have made it onto the varsity roster, and Parker said the scoring averages across the board are tightly bunched. San Clemente is already posting low cumulative team scores, but lost its first two nonleague matches against Santa Margarita on Sept. 1 and Sept. 6. San Clemente posted scores of 216 and 208, respectively, in its first two matches, and were narrowly defeated by 11 combined strokes.