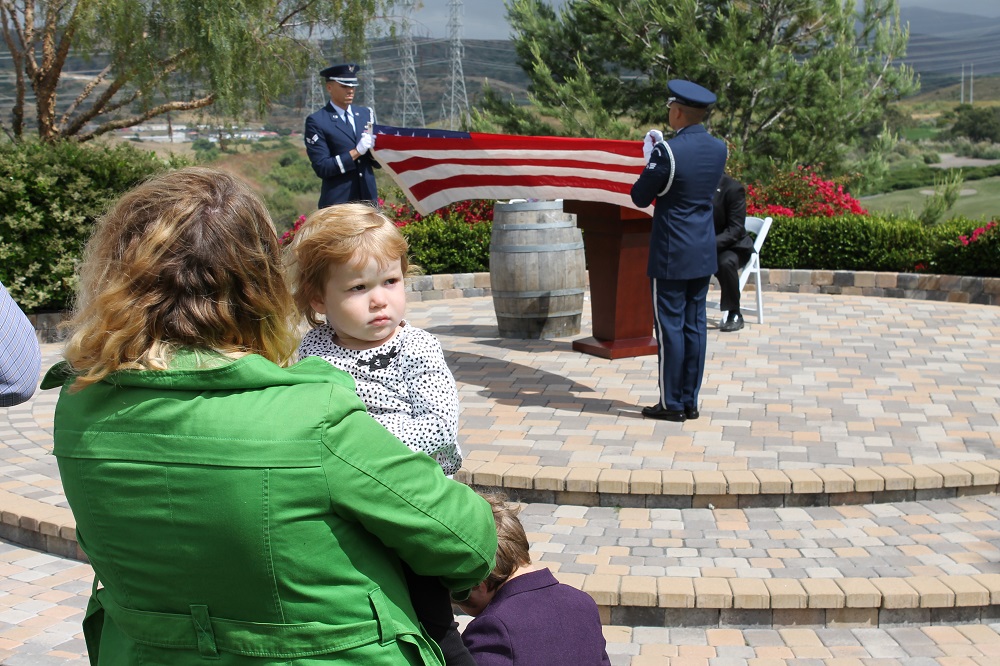 The Mayor of San Clemente’s funeral was well-attended on a breezy Tuesday afternoon at the Bella Collina San Clemente, where nearly 200 people arrived to pay respects to the family of Steven Swartz, and celebrate his life.

Swartz passed away suddenly in his sleep on May 8 while on vacation with his wife in Palm Springs. He was 71. Family, friends, city officials, Sheriff’s deputies, RSVP volunteer patrol and community members were among the many folks seated for a tranquil ceremony overlooking the golf course.

Also present were members of the U.S. Air Force Honor Guard, who presented a folded American flag to Swartz’s family, including wife Nicki and son Kyle.

The service was facilitated by a Rabbi, who talked about Swartz’s life and offered Hebrew prayers and words of condolence.

Mayor Pro Tem Dan Bane said Swartz was a mentor to him on the city council and thanked Swartz’s family for the councilmember’s sacrifices to the city. “Steve always served with integrity. He always stood up for what he believed in,” Bane said.  He noted Swartz was a man of perseverance, loyalty and faith.

Many close to Swartz spoke highly of the Air Force veteran’s passion for serving, whether it was on one of the many committees he volunteered on or as a father, husband and generous friend.

“He certainly felt it was his duty to give back,” said Richard Ford, a member of the San Clemente Rotary, in which Swartz served on for more than 10 years.

Kelly Specht, Swartz’s niece and Vice President of her uncle’s company, South Coast Surety, told heartfelt personal stories, calling Swartz a father-figure who stepped in as her mentor after her own father died.

A close family friend said he was with Swartz on election night, before he was installed as Mayor of San Clemente. “I knew in my heart he wanted to serve this town,” he said. “He wanted to make it better.”

Swartz’s sister, Lisa, called her brother a vocal, compassionate leader whose death would leave an impact on the entire city. “The only thing Steve loved more than this city was his family,” she said.

The pastor said people had gathered to export a truly wonderful soul. “He had a very loving and giving life,” he said.

A reception was held for Swartz after the funeral service inside the Bella Collina clubhouse.