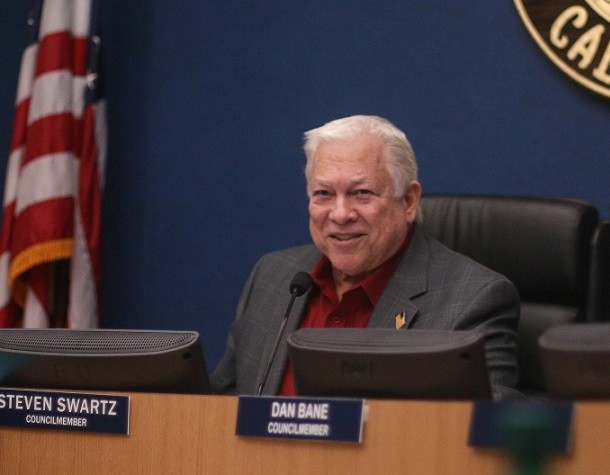 San Clemente Mayor Steven Swartz died on Wednesday morning, May 8, while on vacation with his wife in Palm Springs, a family member confirmed. He was 71.

A funeral open to the public will be held for Swartz on May 21 from 2 p.m. to 6 p.m. at Bella Collina Golf Club in San Clemente, 200 Avenida La Pata.

Kelly Specht, the mayor’s niece, said Swartz had been experiencing flu-like symptoms the day before, but the symptoms weren’t severe enough to warrant a visit to urgent care. His family believes he passed away in his sleep sometime between 2 a.m. and 4 a.m. at the Swartz’s timeshare.

Specht, who is vice president of Swartz’s company, South Coast Surety, said an autopsy was done, but the results won’t be available for a couple of weeks. Until then, his exact cause of death remains unknown.

A San Clemente resident for more than 30 years, Swartz was born and raised in Southern California. The Vietnam Air Force veteran started his own surety agency in 1995 and was its president until he died.

Swartz leaves behind his wife, Nicki, and son, Kyle.

Mayor Pro Tem Dan Bane, who will assume mayoral duties in the interim, said, “Steve leaves behind a wonderful legacy in San Clemente as a successful businessman, a loving family man and a longtime and faithful public servant. Steve will be greatly missed.”

Swartz was elected to San Clemente City Council in November 2016 and installed as mayor in December 2018, winning by a 4-1 vote.

His death has left a vacancy on San Clemente City Council, which the council plans to address at its next meeting on Tuesday, May 21. The city’s code and California government code contain appointment and election options for the council that will be included in the published agenda and packet, said City Clerk Joanne Baade.