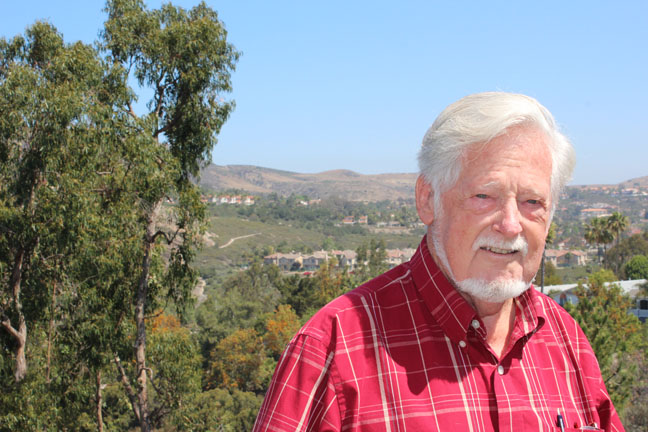 Few San Clemente residents can say they were there to witness the landmark Casino San Clemente ballroom being built in 1937.

Jack Lashbrook’s father, Lowell “Lefty” Lashbrook, was on the construction crew. Jack was 11 then.

He was at the beach in 1939 when storm surf toppled the San Clemente Pier. After a 1940 bond election rebuilt the Pier, he crewed on sportfishing boats that operated off the Pier and helped his mother, Lois, run the Lashbrooks’ cafe at the end.

For the final six years of his life, Jack Lashbrook was honored to serve as San Clemente’s official patriarch, sharing stories at events and helping keep alive memories of the beach town’s early years.

Community members this week are saddened by his passing, April 3, at age 93.

“He was a real, old-school gentleman, always willing to appear at community functions well into his nineties,” San Clemente Historical Society president Larry Culbertson said in a statement released by the society. “We will miss his wisdom and advice on all things San Clemente.”

Moving to San Clemente in 1937 from Illinois with his family, he attended local schools, lived in a succession of now-historical Ole Hanson, white-stucco homes with red-tile roofs and worked pumping gas at San Onofre’s Texaco station along old Coast Highway.

He recalled gazing at the biggest fish hauled onto the San Clemente Pier, a black sea bass weighing more than 500 pounds.

A few months after the Dec. 7, 1941 attack on Pearl Harbor, Jack and some other San Clemente teenagers went to work as carpenters’ assistants, helping construct Marine Corps Base Camp Pendleton.

“We were down there when President Roosevelt came,” he said in a 2013 interview. “He and Mrs. Pendleton were in his touring car. That’s when the 1st Marine Division marched over the hills, came up from the San Diego area and took over the base.”

Like other local residents, Jack Lashbrook volunteered to work shifts as a spotter at a lookout tower erected on a hill overlooking San Clemente’s golf course, watching out for Japanese warplanes.

Enlisting in the Navy in 1943, he served stateside, chief mechanic on a Lockheed Lodestar passenger plane that ferried Navy brass wherever they needed to travel.

After completing his enlistment in 1946, he married San Clemente local Doris Walker in 1949. Their sons Steve, Jeff and Mick relished the beach lifestyle, all growing up to be San Clemente lifeguards.

The Lashbrooks lived out of town for a time, the result of Jack’s 35-year career with Sears. He chose to move back to San Clemente in the 1960s, deciding it was worth having to put up with commuting to Los Angeles.

“One of the oldest Pier rats left in San Clemente,” his son, Jeff, described him April 4 on Facebook. “My first waves were ridden on his back at SC pier 60 years ago. He had a great life and will be missed by all of us. Catch some waves, Dad, catch some fish, go find Mom!”

Lois Divel, San Clemente’s matriarch, arrived in town from Illinois a year after Jack, in 1938, the year the movie theater opened. She grew up with him, two years younger than him. They were part of a close-knit group of childhood friends.

“Absolutely,” she said. “We were very close.”

They remained lifelong friends and until recently, she said, “we’d been going out to dinner for some time, twice a month.”

Kidney failure took its toll. San Clemente’s matriarch was among friends and family who were at Jack’s bedside on his final day.

“A very nice man,” she remembers him. “One of my brother’s best pals.”

Video excerpts of an oral history interview the historical society did with town patriarch Jack Lashbrook can be seen at sanclementehistoricalsociety.org.