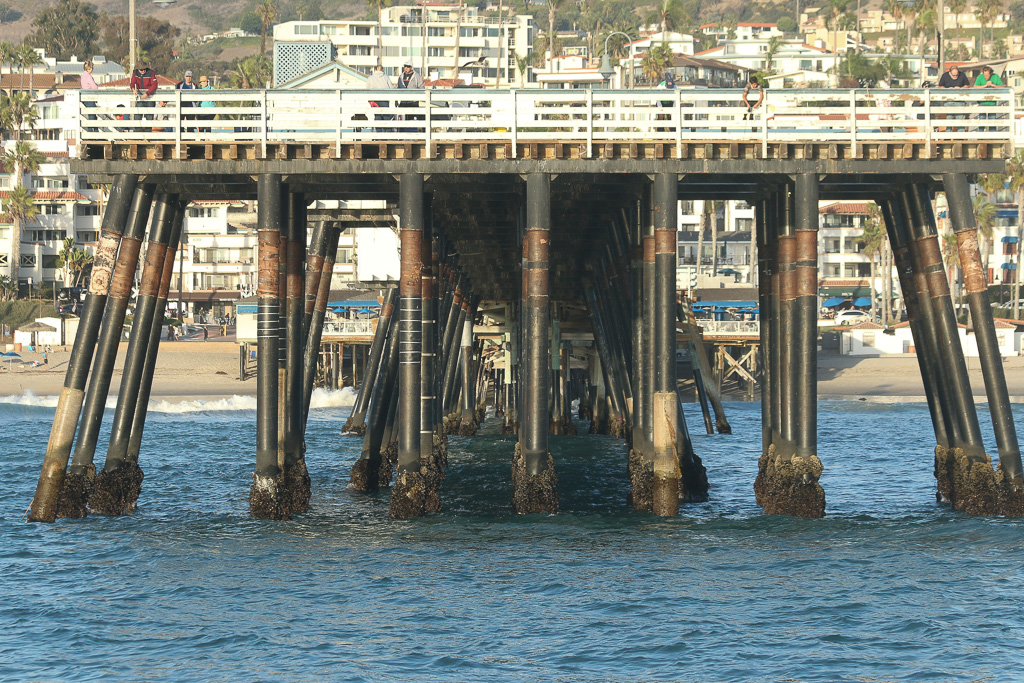 San Clemente Pier: No. 1 Most Polluted Beach in the State

San Clemente Pier ranked number one on Heal the Bay’s dreaded Beach Bummer list, which each year ranks the most polluted beaches in the state based on levels of potentially harmful bacteria.

The news came Wednesday, June 26, when the Santa Monica-based environmental agency released its 29th annual “Beach Report Card,” which assigns A-to-F letter grades for California beaches based on levels of weekly bacterial pollution in the ocean.

The bacterial pollution is measured by county health agencies. According to the report, California beach water quality sagged slightly in 2018-19, driven in large part by increased rainfall.

Only 54% of the beaches received an A or B grade during wet weather, an 8% drop from the state’s five-year average.

Out of 14 local beaches, “San Clemente Pier drain, point zero,” was the only one to receive an F grade for its summer dry period, the second time in three years, according to a statement the city released in response to Heal the Bay’s report.

For its winter dry period, the iconic pier earned a D grade, but received an A for its year-around wet weather period.

San Clemente Pier was one of two Orange County beaches to make the beach bummer list this year. The other, Monarch Beach, North, at Salt Creek in Dana Point ranked No. 6 on the list.

San Clemente Pier last appeared on the list in 2016. According to the current report, the beach is impacted by untreated runoff from a nearby storm drain, although the city presumes that the bacteria exceedances are being caused by avian fecal matter.

He said the city has been working to study and closely monitor the issue.

“I want people to be aware that we are looking at the root cause of that and addressing it, we’ve got studies that are ongoing,” Bane said.

City efforts to mitigate unhealthy levels of bacteria in the water near the pier were talked about in a San Clemente Times April 25 article.

Cynthia Mallett, environmental program supervisor for the city of San Clemente, said, “We were not surprised that it (the pier) would be on Heal the Bay’s beach bummer report card. We were surprised that is was number 1 though.”

Mallett said the city has a Stakeholder Advisory Committee working to identify sources causing excess bacteria in the water, so that those sources can eventually be abated.

At the beginning of May, researchers initiated a Pier Bacteria Source Characterization Study, which uses human, canine and avian DNA markers to determine if the sources of bacteria in the water are coming from those species.

The study is ongoing and should be complete in a year from this June, said Mallett, who works on behalf of the city’s Clean Ocean Program, which has the goal to prevent water pollution in local rivers, creeks and the ocean.

“We do feel that (avian) pigeons roosting in the understory of the pier are contributing to the bacteria exceedances,” Mallett said. “That’s why we included the avian marker in the data analysis. If water quality data comes back and avian DNA markers are prevalent in water quality data, we will then request from city council to consider installing more bird deterrents to prevent birds from roosting in understory of the pier,” she said.

The Stakeholder Advisory Committee is comprised of experts and local citizens tasked with reviewing the city’s monitoring plan and water quality data when it comes in.

“We are also conducting observations of the watershed area that drains to the storm drain pipes that discharge under the pier,” Mallett said.

This involves walking around the city’s streets and looking for sources that could contribute to bacteria at the pier.

“We look for people hosing off sidewalks and driveways, or outside of commercial areas, which is not allowed anymore,” Mallett said. “We also look for groundwater discharges. There are some groundwater seeps in the watershed that upwell at different locations and can drain into the curb and gutter. If we do identify a particular source and confirm it, we will move forward with management measures to abate those sources.”

Watershed observations and water sampling are planned to continue during dry and wet periods near the pier.

Should people be swimming near the pier?

Mallett said San Clemente municipal code prohibits people from swimming and recreating under the pier and 100 feet north and south of the pier for safety reasons.

For the most recent water quality data, the public can go to ocbeachinfo.com. On the webpage, there is a map showing Orange County beach sites where people can check if the beaches are meeting indicator bacteria health standards.

While scientists remain deeply concerned about water quality issues, there is some good news for beachgoers.

According to the Heal the Bay report, 94% of the 500 California beaches monitored by the environmental agency received an A or B grade for the busy summer season.

During the dry winter season, 87% of beaches received an A or B grade. Overall, 33 California beaches made it on Heal the Bay’s coveted Honor Roll this year, which is lower than last year (37) likely due to higher than average rainfall.

To report any water runoff in San Clemente when it is not raining, call the 24-hour Pollution Reporting Hotline at 949.366.1553.