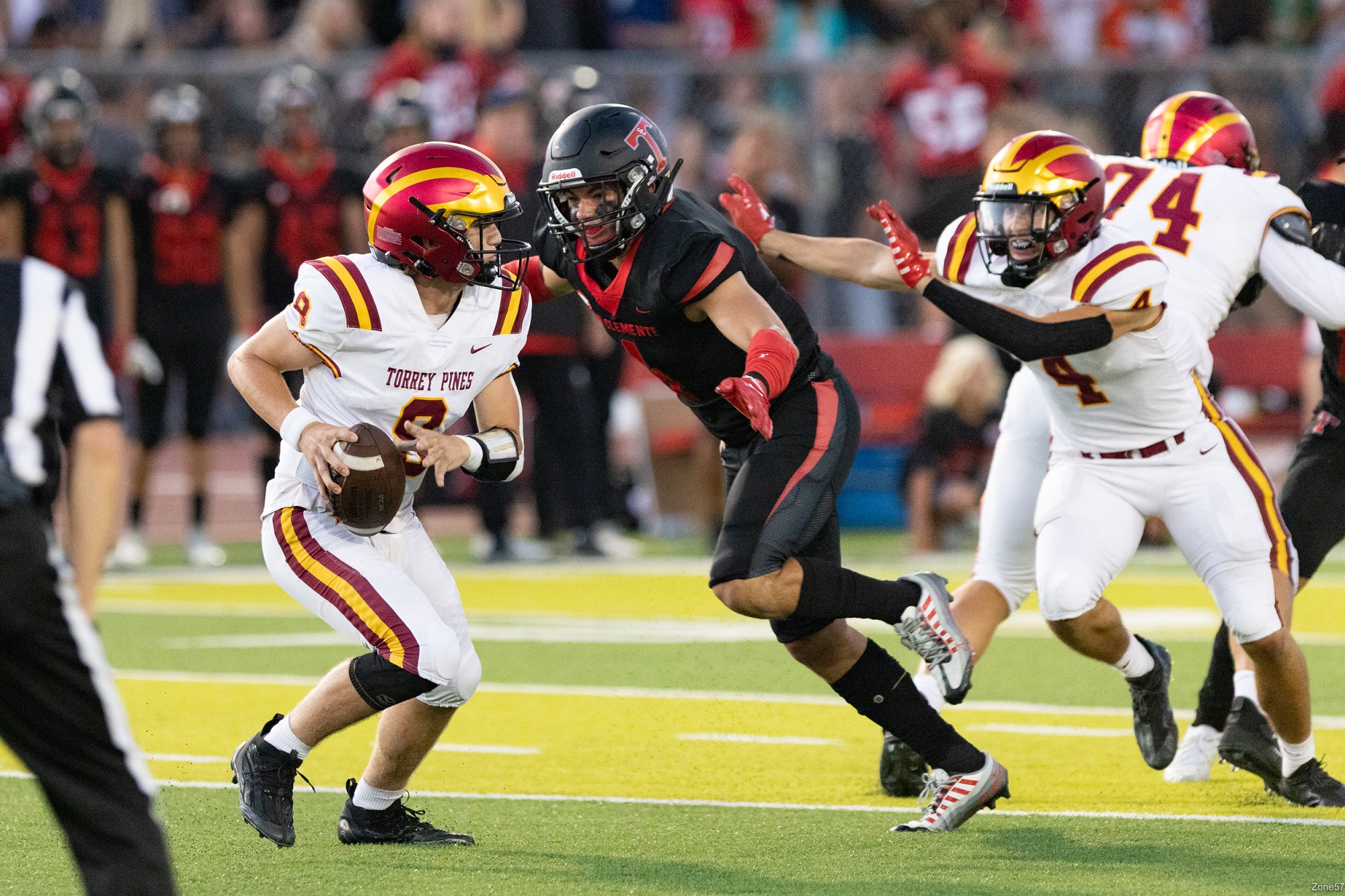 SAN CLEMENTE – The “big uglies” got their chance to shine Friday night, as the ground game won the day during San Clemente’s home-opening win over Torrey Pines, 28-17, at Thalassa Stadium.

The offensive line paved the way for three rushing touchdowns, two of which came on explosive plays, to establish a mostly-comfortable cushion for the Tritons on Senior Night.

Senior Blake Allen led the way for San Clemente, totaling 132 yards and a score on 19 carries. His 57-yard dash on the Tritons’ first play from scrimmage in the second half gave San Clemente all the points they needed with a 21-3 lead.

“We knew that they were going to have five guys in the box, so we went into trips and dubs (formations),” the senior said. “Our O-line knew that they had to win their assignments, and they did tonight. (They) gave great lanes for me to run, and I got it done.”

The Tritons (2-0) will now prepare for another San Diego County opponent, as they host La Costa Canyon Friday, Sept. 2.

An unlikely suspect was responsible for the second big play of the game, as sophomore quarterback Jack Loper stepped in for junior Broderick Redden, who the coaches decided to sit at game time due to a foot injury.

Shortly after San Clemente recovered a fumble midway through the third quarter, Loper rumbled and stumbled his way through defenders for a 51-yard score that amazed those in attendance. At that point, the Tritons led 28-3.

“He did a good job controlling the offense, (and the) seniors did a good job supporting him,” Ortiz said.  “Him busting that run was a big change of momentum for the team, and I think he did a great job stepping up.”

Following Loper’s touchdown, Torrey Pines (0-2) did not go quietly into the night. The Falcons engineered a 15-play drive that ended with senior Alex Taylor punching in the ball from four yards out.

Another drive chock full of run plays saw Taylor score his second touchdown of the night on a 1-yard dive, cutting the Tritons’ lead to 28-17.

Although the Falcons forced a three-and-out to get the ball back with 3:25 remaining in the game, sacks by seniors Hayden Dill and Nolan Reid fittingly ended the game.

Ortiz said his defense lost their edge in the third quarter and needed to be more disciplined.

“When you go against a Wing-T, they’re very disciplined in what they do,” he said. “I think at times we were kind of trying to make the play versus doing our job, and I told the kids that at the end of the game.”

With Loper making an unexpected start, San Clemente made the sophomore’s debut drive easy. San Clemente senior Thomas Hartanov returned the opening kick to midfield, and a 21-yard Allen run and a defensive personal foul set the Tritons up deep. Loper connected with Hartanov on a screen pass, who did the rest on the way to a 14-yard touchdown.

Later in the first quarter, the Tritons rode Allen and junior Aiden Rubin to the end zone, as Rubin scored on a 3-yard run for the 14-0 lead.

Torrey Pines finally got on the scoreboard with a 20-yard field goal by Hugo Egea-Flores late in the second quarter.

Junior Dawson Washington picked off Loper and gave the Falcons the ball at San Clemente’s 32-yard line with 3:02 left before the half, but Torrey Pines fumbled it away two plays later.

Loper went 3-8 for 24 yards, a touchdown, and an interception. Torrey Pines’ Remi Baere completed 7 of 8 passes for 67 yards.

Taylor rushed for 100 yards and two scores on 26 carries for Torrey Pines.

Ortiz said the Tritons reached their goal of being 1-0 for the week despite the possible distractions of Senior Night and Teacher Appreciation Night. Now, they must do the same heading into their next contest.

“The goal is to be 1-0 and take one week at a time,” he said.  “It’s Military Appreciation Night (on Sept. 2), so, we’re gonna have the place packed with a lot of Marine Corps and first responders, and we’re excited to host them next week.”