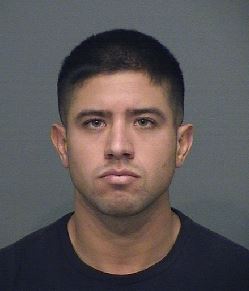 Gonzalo Castro, 28, of San Clemente, was arrested by the Huntington Beach Police Department (HBPD) on Wednesday, July 26, after a former Marina High School student told authorities the he had sexually assaulted her.

“(The victim) met the suspect during this past track season when he volunteered with the track and field team,” a press release from HBPD stated. “(The victim) developed a coach/athlete relationship with him, and the suspect allegedly sexually assaulted the victim during an off-campus training run. Once the victim reported the crime, detectives from the HBPD Crimes Against Persons Sexual Assault Unit immediately initiated and actively investigated the case.”

HBPD reported Castro is an active duty U.S. Marine Corps Sergeant and recruiter based out of the Costa Mesa recruiting office. Castro served as a USMC recruiter at Marina High School and at Ocean View High School as well.

“Once the Huntington Beach Unified High School District was notified, they fully cooperated in the investigation,” the release stated.

Castro was arrested “without incident” and later posted bond.

Castro is due to appear in court for his first hearing on Sept. 26. HBPD stated detectives believe there may be additional victims of the accused. People with information related to the crime or know of potential victims, contact Detective Anthony Pham at 714.536.5973 or apham@hbpd.org. Anyone wishing to remain anonymous should call Orange County Crime Stoppers at 1.855.TIP.OCCS (855.847.6227).

It is the policy of the San Clemente Times to protect the identity of sexual assault victims, whether those accused of committing the crimes are found guilty or innocent in a court of law.