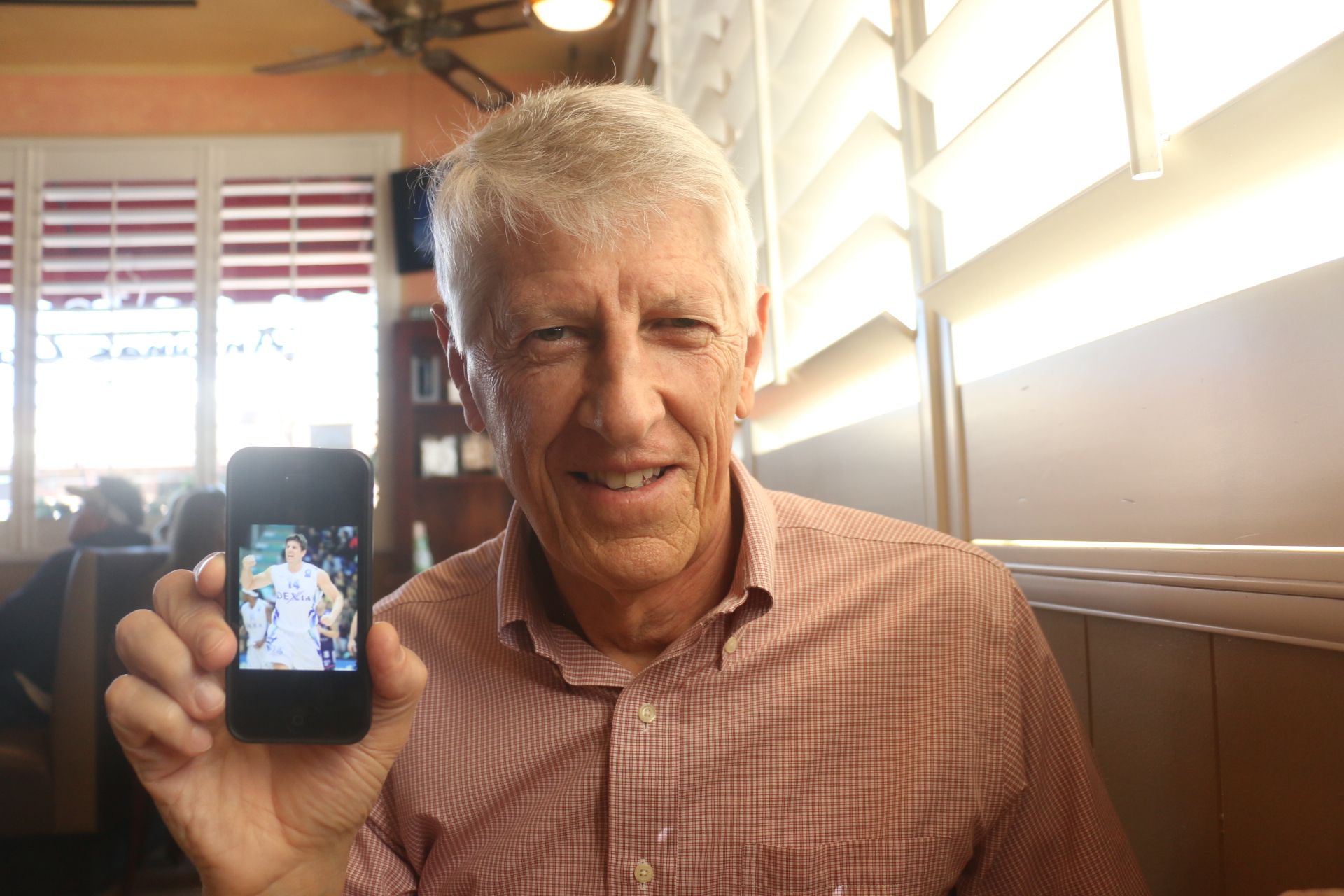 Q&A with San Clemente resident Jean Bellin on his son, Sébastien, after attacks at Brussels Airport

Jean Bellin of San Clemente was anxious and distraught when he saw the photo of his son, Sébastien, lying on the floor of a terminal in Brussels-Zaventem Airport on Tuesday, March 22 in Belgium.
The photo was released on Twitter hours after the attack. Jean wasn’t able to contact his son for hours after the attack. When finally reached him at a hospital in Brussels, he said he was immensely relieved when he heard his voice.
The terrorist attack has sent rippling effects across the globe. According to Belgian officials at a press conference on Wednesday, at least 34 people have died and many more were injured. Since the attacks, the Islamic State in Iraq and Syria (ISIS) has claimed responsibility for the attacks, according to the Associated Press.
At least two suspected terrorists set off explosives in the main terminal of the airport and others are suspected of plotting with them, according to mainstream reports.
Sébastien is a former professional basketball player who played on European teams and was at the airport on his way back home to Michigan after a business trip. Sébastien works for a start-up company that helps streamline the creation of indoor sports.
Jean has lived in San Clemente since 2006. He was the president of Metagenics, nutritional supplement company, that was based in town. Jean met with the San Clemente Times on Friday, March 25, to talk about the aftermath of the attack and to give an update on the condition of his son. During the interview, Sébastien was in the middle of surgery for severe injuries on his hip and leg at a Belgium hospital.

Jean: “He had really severe injuries, and I think it was a succession of injuries that may have saved his life. When it first happened, the first bomb went off and he started hearing all the screaming and (saw) the people running away. And he started running away, too. At that time, one of the terrorists shot him in the buttocks and he fell down on the floor. Because of that, during the second blast, all of the debris flew over him but one of the bomb fragments cut through his leg and separated his tibia from the knee. He had fragments in his upper leg. So today (March 25) they were fixing his hip and the femur and the wound in the back. But the left leg will be a much longer rehabilitation. He’ll have to have a skin and muscle graft between the muscles.

SC Times: How do you think he got out of there alive? It seems like they (the suspected terrorists) hit this with all they had.

Jean: Well, that’s a good question. He was lying on the floor, bleeding profusely. That picture of him lying down has gone worldwide. He was there probably about an hour and then people started helping. One guy transported him to the front of the airport, and he was taken by the ambulances.

SC Times: Did he contact you immediately after the attack?

Jean: No, what happened was one of the major Belgian newspapers had reporters there immediately and they had reporters taking pictures. Immediately, our friends (after seeing photos online) in Belgium said, ‘Oh my God. Is that Sébastien?’ His wife was a teacher at an international school in France, many of her colleagues sent her the picture at about 7 a.m. Michigan time. And she completely lost it when she saw the picture and called us right away. And we both completely lost it. After that, his wife, Sara, was without any news. I started calling everyone in Belgium. The crisis center, they didn’t have any information on him yet. So many people were flooding the crisis center because they had to help so many people.
Finally, through a friend, I got the number to the hospital and I got in touch with him directly and got in touch with the head nurse … and immediately the nurse gave the phone to him. When we both heard each other, we both lost it, of course. It was a very emotional time.
Right after that what he said was, ‘Dad, what I saw around me … people dying, kids crying and hurt.’ Sébastien had lost a lot of blood.

SC Times: What happened after he was hit by the attack?

Jean: There was an African man who helped bring Sébastien behind a column. And I’ve been looking for him to try to find him. Thank goodness, because of that he wasn’t crushed by the ceiling. (The ceiling panes began to fall shortly after the explosions). I found the guy yesterday and contacted a few people, and I just now got a confirmation that it is the guy. It is him. And I’m going to meet with him next week. I’m so grateful for this guy. He is a baggage handler at the airport in Brussels. Instead of leaving, he went back and tried to find people and put together some sort of restraint to stop the blood flow. I think if maybe 10 minutes more, I don’t think (Sébastien) would have made it.

SC Times: What was going through your mind when you received the news?

Jean: What’s hard is you see your family member, your oldest son … what I did is after I collected myself I looked at the picture and could see he was perfectly conscious. He was in pain but OK. He was trying to reach his knee. So I thought, OK, he’s alive. And that’s when I became driven to find him.”

SC Times: How has this experience shaped your life so far or changed your perspective on the world?

Jean: I don’t know that it’s changed my perspective, but definitely in this period of time, what we have done as a family is just focused on him (Sébastien) and what we can do and plan. Obviously, I want to give his wife the priority to see him and she is traveling today to be with him. I’m going to take my other kids and my wife to see him next week and have a family reunion at the hospital. That’s the focus. The rest, how does it shape my life? I raised my kids on my own, I have three sons, so we’re a very tight unit. It’s probably made us even tighter and it’s what we got, family. And I think about his family and his wife and his three kids. I can’t tell you how much time we’ve spent on the phone.
So, I don’t know if it’s changed my perspective on life. I don’t know if I see the world any differently.
It’s unfortunate that we have people who are pushing for (violence) because they profit from arms (sales). It’s not about Muslims versus others; it’s more of who benefits from throwing people against each other. It’s all the arms manufacturers. The Kalashnikov (assault riffle) that was found at the airport was sold by a Western arms dealer. That’s what makes this world even more crazy. How could we as a nation in the U.S. allow for no control over guns?
And the other aspect is this incredible rhetoric from Donald Trump and Ted Cruz, everyone of them, who are supported by this (cheering) with all these voters who are (saying) ‘Yeah, we’ve got to kill them all. We’ve got to kill the Muslims, expel them, prevent them from entering. We’ve got to carpet bomb Iraq.’
What are you talking about? Do you think that’s going to solve the problem? It’s going to make it worse, worse for our kids and our grand kids. But that was my position before all this happened. I don’t understand the extremism here.
The more you have extremism here, the more you have extremism there. This is 2016. How would intelligent people support this? We need intelligent policies and we can’t treat the minorities like that, and on top of that we’ve got to give people a voice to speak up. That’s the only way the world is going to quiet down a bit and people will be able to come together.

SC Times: What has Sébastien been saying to you over the phone since he started his recovery?

Jean: He’s been saying, ‘OK, I’m going to get back out there. I’m going to make it. The main thing for me is that my daughters will grow up with a father and I want to be there.’ He and I have been working on a few projects as well, so he’s been focusing on that. Our family is one of the lucky ones for sure.

SC Times: Do we know how long his recovery is going to take?

Jean: Well, the buttocks will be a matter of a few weeks. But for the lower leg, my guess it’s a year.

SC Times: Is there anything you’d like to add about this experience, something people might find useful or interesting?

Jean: We are so grateful for the love and support from people from all over the world and, of course, from people in Brazil, where we lived for eight years. My former colleagues and friends in Brazil, and around the U.S., I had people who I hadn’t heard from in 30 years. So, I’m very grateful because that has given more strength to everyone in the family. I’m constantly thinking that we are lucky, but what about the other families and what they’re going through? You can’t help but feel completely together with the other families. That’s what’s going through my mind all the time. I mean, I’m doing things and I’m focusing on other things, but in your mind you’re just processing all of it.
You feel that we’re all in this together. That’s what I hope, that this event will bring people together instead of separating and I’m so baffled at the push of the Right and the Far Right to further separate people. I don’t understand that. It doesn’t help.”