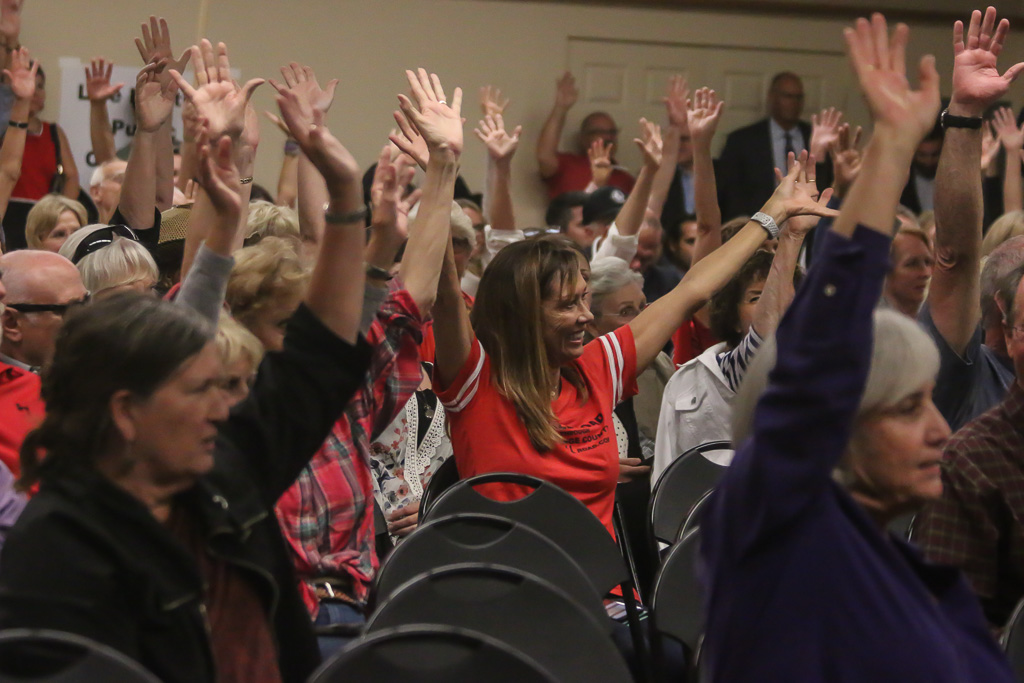 A town hall forum on the plans for possible toll roads and managed lanes through San Clemente and I-5, respectively, was billed to explore a related 1,200-page environmental planning document, a project study report-project development support (PSR-PDS), and to ask questions about the nuances of the document.

On Oct. 24, city officials invited members to the forum from the Transportation Corridor Agencies (TCA), Orange County Transportation Authority (OCTA) and the IBI Group, which provided the city with study results in March stating that a toll road through the area would have little, if any effect on traffic mitigation in South Orange County than if arterial roads were enhanced.

TCA officials were heckled right out of the gate, as residents who want to protect their homes in San Clemente loudly voiced their anger with anything that would hint at eminent domain or the construction of a toll road.

Throughout the forum, audience members screamed for the abolition of the TCA, something that during this election cycle San Clemente City Council candidates have either said they will try to do or promised to accomplish.

Even Mayor Tim Brown took the opportunity to take a verbal jab at the toll road administrators while trying to gain order of the audience.

“Yelling at these guys, frankly, isn’t going to move the ball forward, although it feels super good,” Brown said after explaining the public comment process during the forum. “The way we move the ball forward is putting our name and our comments on the record in a methodical and sometimes emotional way so that the board members can hear these complaints.”

"No Toll Road Through San Clemente" or "South Orange County" signs were prevalent at the Toll Road Town Hall hosted by the city of San Clemente on Oct. 24. Photo: Eric Heinz

The Toll Road Town Hall was broadcast on Cal-Span and projected on a screen behind the speakers panel on Oct. 24. Photo: Eric Heinz

Michelle Schumacher, who has fought against the toll roads through San Clemente, speaks during the public comment portion of the Toll Road Town Hall on Oct. 24. Photo: Eric Heinz

Mike Chesney, the chief strategist for the TCA, awaits the start of the Toll Road Town Hall on Oct. 24 in San Clemente. Photo: Eric Heinz

One of the eight proposals the TCA has put forth would drive straight through San Clemente east of I-5, down through the hills off Avenida La Pata and conclude near San Clemente High School at or near Avenida Pico. Some of the proposals the TCA has put forth do mention eminent domain could be necessary, which many have said is a terrifying prospect for people who have built their retirement savings into the net worth of their home, as many have said they won’t reap the full value of the property through eminent domain hearings.

“Right now we’re going through a process of understanding what options are available to the board, and after that it’ll be a…process of studying that,” said Mike Chesney, the TCA’s chief strategy officer. “There is an opportunity to have other alternative options to be introduced. The alternatives we have now, some may be eliminated and some may be added.”

The city currently has two active lawsuits against the TCA, one that challenges the legitimacy of the protective agreement settled between the toll road administrator and the Coalition to Save San Onofre in 2016, and another that seeks public documents.

A separate lawsuit challenges the constitutionality of collecting tolls by the TCA and another from The Reserve Maintenance Corp. in San Clemente challenges both the protective and settlement agreement of the 2016 suit.

The next step in the toll road phase is scoping, which is slated to start taking place in December. The draft environmental impact report is expected to be ready as early as the first quarter of 2019. The TCA expects to spend three to five years examining the different ideas that will be identified in the draft document.

People who want to submit comments on the document can email tollroadinfo@san-clemente.org and those comments will be added to the public document.