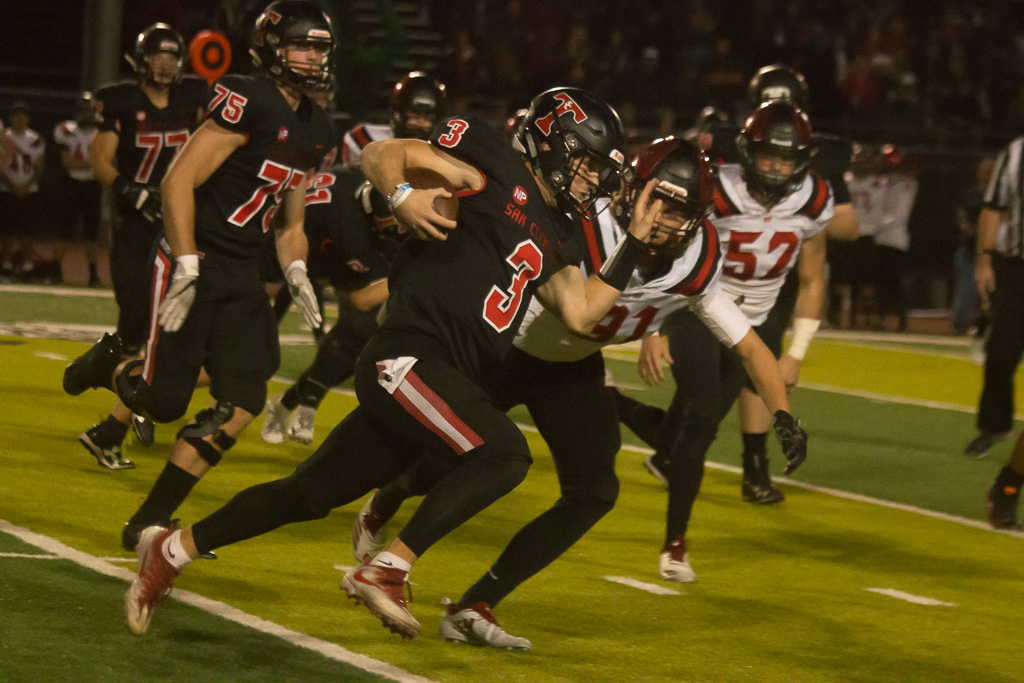 San Clemente and Murrieta Valley traded early touchdowns, but a blocked extra point and turnovers that turned into scores swung the game drastically into the Tritons’ favor in a win over the Nighthawks, 49-26, in a CIF-SS Division 1 first-round game at San Clemente High School.

San Clemente (7-4) has won six in a row and advances to the Division 1 quarterfinals and will host top seed and national No. 1 St. John Bosco next Friday, Nov. 9. St. John Bosco defeated Serra of Gardena, 49-0, in the first round.

“For us as players and coaches, it’s a great opportunity,” San Clemente coach Jaime Ortiz said. “Kids want to come to San Clemente because of games like this and games like next week, and that’s what we’re all about. Expecting a great environment and a great game. Should be fun.”

It was the fourth matchup in three seasons between San Clemente and Murrieta Valley (6-5). San Clemente took the first two games in the series, including the 2016 CIF-SS Division 2 title game, but the Nighthawks won the most recent installment, 55-38, on Sept. 7.

“We’ve played them so many times that we had a good feel for their personnel and what they’re trying to do,” Ortiz said. “We told our kids this would be a good mark to see how much we’ve improved as a program.”

With San Clemente up 14-13 after Ray Ferrell blocked a Murrieta Valley extra point, the Tritons pushed out further ahead and their defense swung the game.

Two drives after the extra point block, Donaldson broke off his second touchdown run with a 34-yard burst up the middle for an eight-point San Clemente lead.

Two plays later, Jake Brannon intercepted Murrieta Valley’s pass and returned the ball to the 10-yard line. Donaldson scored on a four-yard run with two minutes remaining in the half to lead 28-13.

San Clemente closed out the half with a booming combo sack from Ryan Altman and Caden Robertson.

“It took us a little bit to settle down,” Ortiz said of his defense, “and once we got a rhythm for what they were doing, I thought the kids did a good job adjusting. Our coaches game plan-wise did a good job. For us, getting the turnovers in the second quarter and getting the pressure on Hank (Bachmeier), who’s a very good quarterback, kind of set the tone for the second half.”

Murrieta Valley had an opportunity to get back into things with the opening drive at the second half and got deep into San Clemente territory. Then on a fourth-and-four play at the Tritons’ 10-yard line, Bachmeier ran for the first down, but Harrison Thomas forced the fumble that San Clemente recovered at its four-yard line to end the Nighthawk threat.

Catch of the year?

CATCH OF THE YEAR!!

The Tritons then orchestrated a 96-yard drive with a 36-yard pass from Costello to Jaydel Jenkins, which Jenkins tipped to himself and caught with one hand, and Costello’s second touchdown run of the day, three yards, to control the game, 34-13.

The following series put the game on ice for San Clemente as Murrieta Valley’s punt snap went over the punter’s head for a safety, and after the safety kick, Costello and Jenkins hooked up on a first-play, 60-yard bomb for a touchdown and the 29-point lead, 42-13. It was the first passing touchdown of the game at that point.

Trenton Brail, Dean Westerberg and Andrew Luzi picked up sacks down the stretch for San Clemente.

Murrieta Valley capitalized on a fumble recovery with a touchdown pass of their own, but San Clemente snuffed out any thoughts of a comeback as Donaldson sprinted 65 yards down the Triton sideline for his fourth touchdown of the game.

Murrieta Valley scored once more with seven minutes remaining before the Tritons wound down the game.

The game opened up as if it was going to be another shootout between the offensively gifted programs.

San Clemente opened quickly with a 31-yard pass from Costello to Cian Smith and scored on a six-yard run by Donaldson.

Murrieta Valley, which was playing without its top receivers due to injury, opened up with a strong running attack to put together a 17-play, 80-yard drive to tie the game.

The Tritons responded by springing back out with a 30-yard connection from Costello to Smith and a three-yard touchdown run by Costello for the lead, 14-7.

The Nighthawks returned the ensuing kickoff 62 yards to set up a touchdown run on the other side of the second quarter. Ferrell blocked the extra point attempt to keep San Clemente up, 14-13.