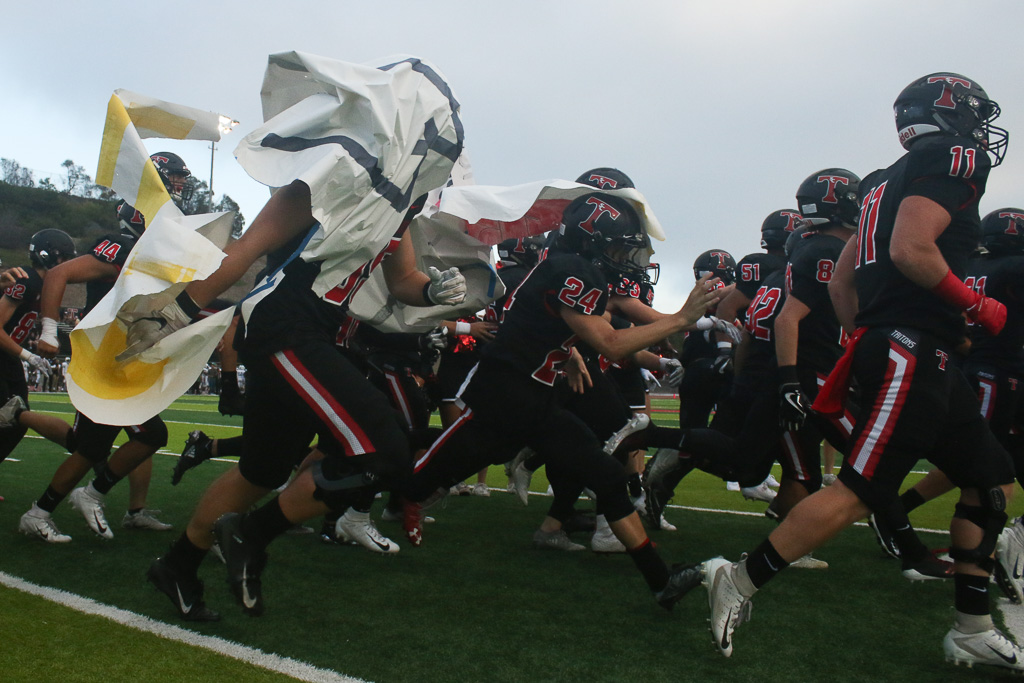 The San Clemente football team walked through the handshake line with Edison, sprinted back towards their sideline, filled their locker room under Huntington Beach High School’s concrete bleachers and let out a primal scream.

RJ Donaldson put San Clemente back on top with a 25-yard touchdown run, and the Tritons defense shut down a last-minute Edison drive to defeat the Chargers, 31-24, and break their first four-game losing streak in five seasons.

“I told them at halftime, ‘gentlemen, we’re going to go out and win the second half,” Ortiz said, “’As soon as it’s done, we’re going to go into the locker room and celebrate together.’ These kids have been through a lot in the last four weeks.”

San Clemente (2-4) had lost four in a row for the first time since a Sam Darnold injury-induced eight-game losing streak to end the 2013 season. However, the Tritons led in the fourth quarter in all four of the games, and three of the losses came by a combined six points to teams with a combined 14-1 record.

“I credit our coaches and our players for staying together,” Ortiz said. “A lot of teams could have quit and say it wasn’t meant to be and we’re done. Every week these guys have battled and played hard every single time.”

“What doesn’t kill you makes you stronger. I think we’re benching about 1,000 pounds right now.”

After a gauntlet nonleague schedule, San Clemente (2-4) reaches league play when they travel to Tesoro (4-1) next Friday, Sept. 28. Besides San Clemente, the other four South Coast League teams have a combined record of 18-2.

“I think when we get into league, we’re not going anywhere,” Ortiz said. “We’re the best 2-4 team in California.”

The Chargers scored on a four-yard wildcat run in the third quarter and took the lead in the fourth quarter on another wildcat run of eight yards, 24-21.

“A little bit,” Ortiz said having of the potential “here we go again” vibe. “At some point, it’s going to work in our favor.”

Cole Thompson knocked in a 34-yard field goal to tie the game, 24-24, and Jake Brannon intercepted Edison on the ensuing drive to set up the streak-breaker.

Brendan Costello ran for 30 yards, and Donaldson had back-to-back carries of five yards and the 25-yard touchdown to retake the lead with a little under three minutes to play.

It was plenty of time for an Edison offense that had been dangerous in the second half, but the San Clemente defense was up to the task.

Edison drove into San Clemente territory, but Kade Coury and Cole Batson came up with a fourth-down sack to end the drive, Edison’s comeback hopes and the Tritons’ losing skid.

“It’s really emotional to get this win,” Costello said. “We’re really happy about it. We’re never satisfied. On to league now.”

San Clemente got off to an auspicious start as the Tritons fumbled the opening play of the game at the their own 18-yard line.

However, the defense showed a sign of strength with a sack by Kaleb Glasgow to hold Edison to a 20-yard field goal, 3-0.

The Tritons went three-and-out on their next drive, but San Clemente would win the field position battle on an excellent punt by Charlie Bein to pin Edison at its own seven-yard line.

The defense was solid again, forced Edison to punt from its own goal line and the Tritons took over at the Edison 40.

Costello hit Cian Smith wide to the right, and Smith did the rest to run by around and by defenders 30 yards to the end zone. San Clemente took the lead, 7-3.

San Clemente scored on three consecutive drives as the Tritons followed up with an eight-play drive for an eight-yard scoring run by Donaldson. Batson recovered a fumble on the next Edison possession, Costello hit Jay Baggs for 28 yards and Costello ran in a TD from 10 yards out to complete the scoring streak, 21-3.

Action picked up again in the final minutes of the half when San Clemente stripped an Edison receiver and Preston Rex came up with a fumble recovery. Rex also grabbed an interception early in the third quarter

On the very next play, San Clemente attempted a double pass deep, but the deep ball was intercepted.

Edison capitalized with a 55-yard bomb that set up a 12-yard touchdown pass with 31 seconds remaining in the first half. San Clemente took the lead to halftime, 21-10.