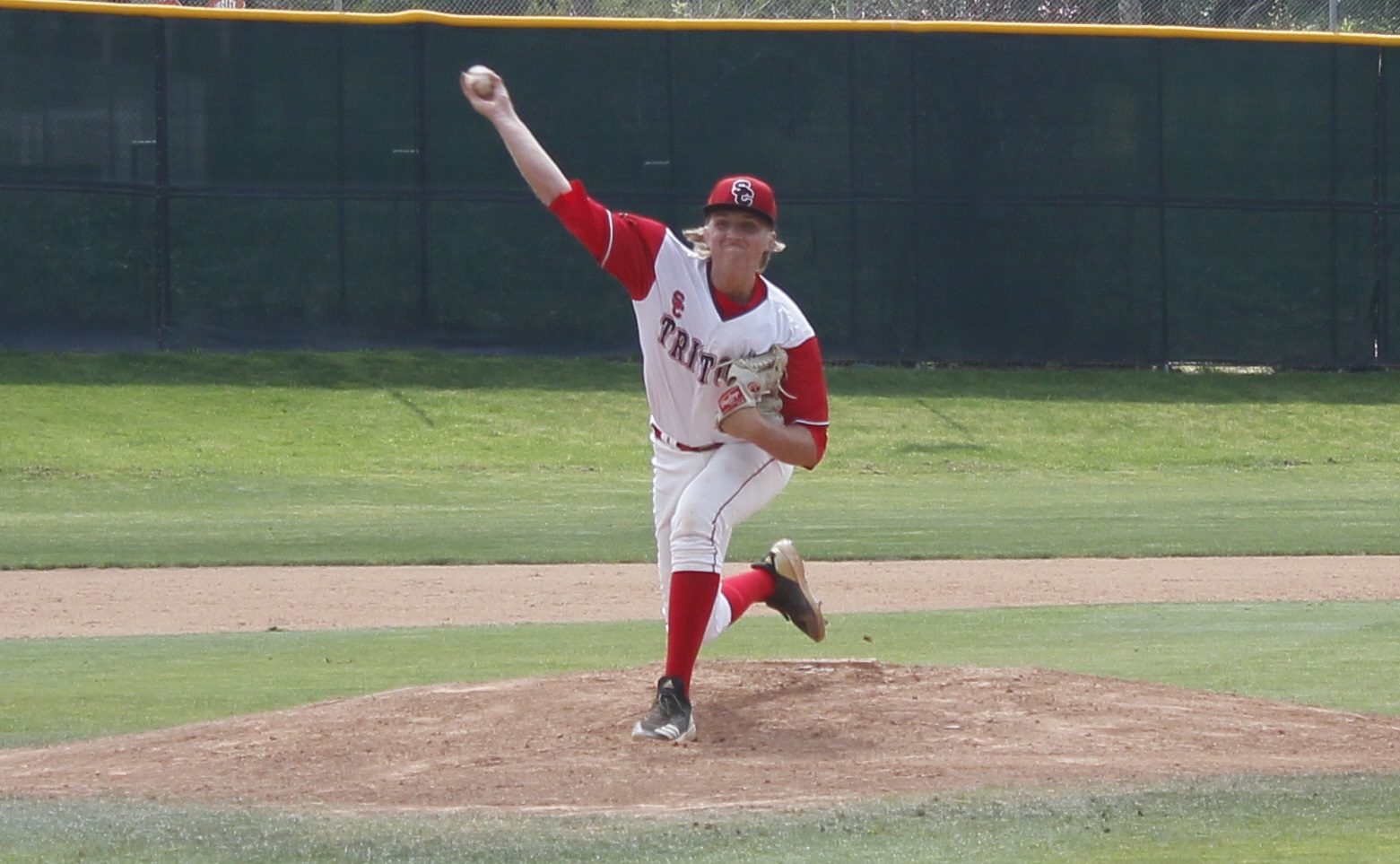 SAN CLEMENTE — The San Clemente baseball team was swinging for the top.

With their ace on the mound back at the friendly confines of Sisca Field, the Tritons had bounced back from a 7-1 loss at league-leading Aliso Niguel on Monday, April 1 for a 4-1 lead in the fourth inning on Tuesday, April 2.

Then the defense slipped, the Wolverines pounced and the lead evaporated.

Aliso Niguel loaded the bases and scored four runs in the fifth inning and shut down San Clemente with six strikeouts in the final two innings, including four in the seventh, to take the Sea View League contest, 5-4, at San Clemente High School.

“Defense the last 24 hours, two games in 24 hours, really hurt us,” San Clemente coach Dave Gellatly said. “Aliso is the cream of the crop in our league, and we have to do everything right to beat them. We had an opportunity, but the mistakes killed us.”

San Clemente senior right-hander Connor Wilford was again strong through the first four innings and had five strikeouts in 4.2 innings. Wilford, a recent Cal Poly commit, has posted a 1.29 ERA and .156 opposing batting average this season.

“He’s been great all year,” Gellatly said. “He’s going to have a great career ahead of him beyond San Clemente High School. I was impressed with his composure.”

“Our defense and our pitching has been sound all year long,” Gellatly said. “It’s our offense that’s been struggling. We came out and hit the ball well today, but the stuff that we have depended on to keep us in ballgames didn’t work out today. That’s baseball.”

Logan Phillip stole home as part of a double-steal play to score in the first inning for San Clemente (10-9-2, 3-4) for the opening lead.

After Aliso Niguel (18-3, 6-0) tied the game in the top of the fourth on two errors and an RBI groundout, San Clemente burst back ahead in the bottom of the inning.

Brent Riddle led off with a double and scored on an RBI single by Dylan Carter. Matt Masotto followed up with a double, and Ryan Baxter knocked home both Carter and Masotto with a single for the three-run lead.

Then Aliso Niguel showed its mettle in the fifth inning.

The Wolverines loaded the bases on an error, single and walk. Aliso Niguel scored on a single, a wild pitch and a two-run single to retake the lead, 5-4.

Left-hander Quinn Mathews, a Stanford commit, threw the final three innings for Aliso Niguel to pick up the save. Mathews struck out six in the final two innings, including three dropped third-strike pitches. Mathews actually had four strikeouts in the seventh inning, after one batter reached on a third strike that got past the catcher.

Both Aliso Niguel and San Clemente missed the playoffs in the South Coast League last season. Experience and a year’s time have improved Aliso Niguel, and the Sea View League has made San Clemente a more competitive team.

“We battle more,” Gellatly said of this year’s group. “We realize that we’re not as talented as we were last year, but we’re also not in as talented a league as last year. We try to play more as a team and pull for each other.”

San Clemente has already claimed two of three games against Trabuco Hills, and the Tritons play a home-and-home against San Juan Hills on Wednesday, April 10 and Thursday, April 11.