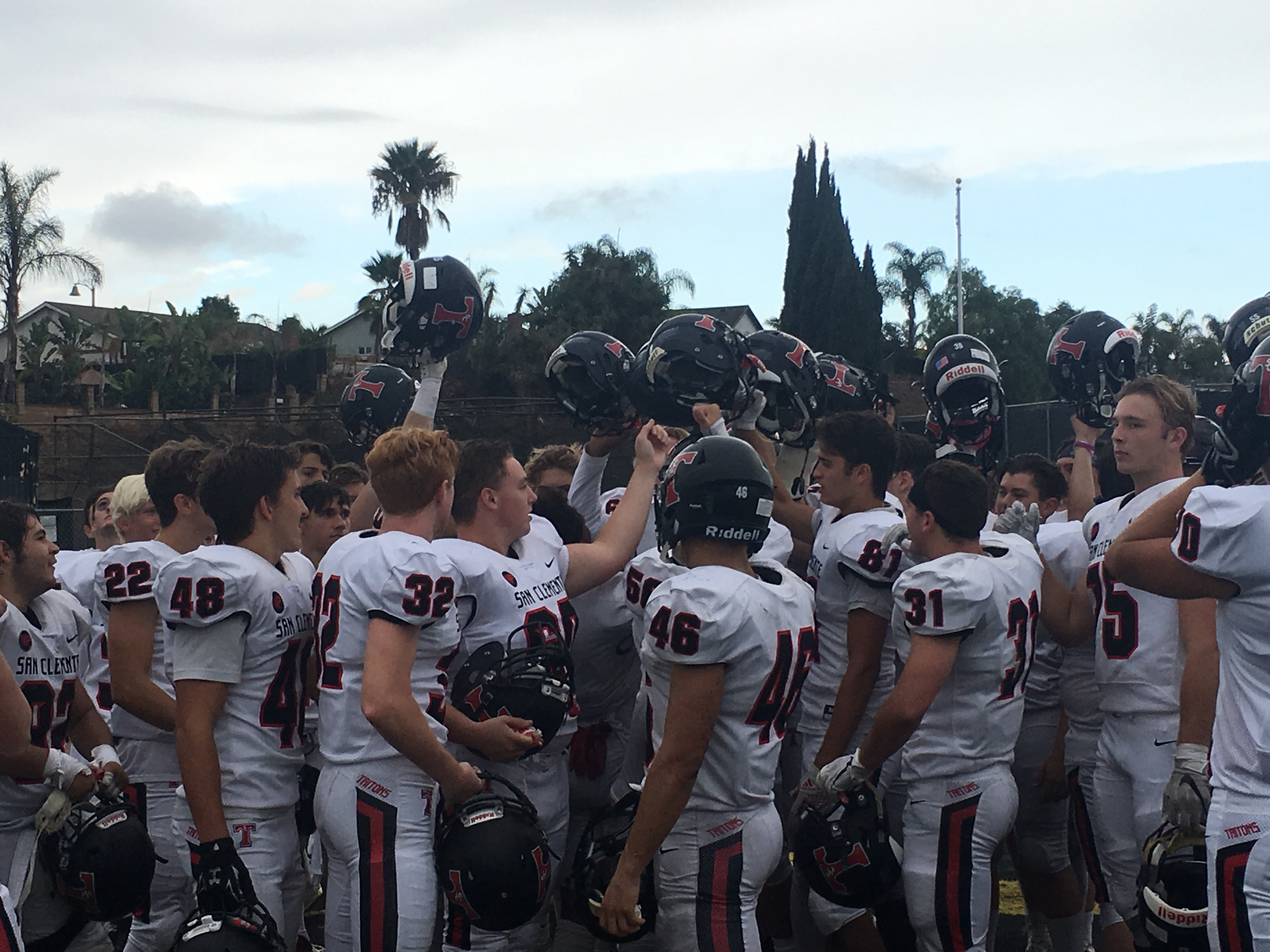 After a 1-4 start and a four-game losing streak, the San Clemente football team has won four in a row to clinch a playoff spot and set up a South Coast League championship game next week against Mission Viejo after a lightning-delayed Saturday win over Capistrano Valley, 35-26, at Capistrano Valley High School.

“When we were 1-4, people left us for dead,” San Clemente coach Jaime Ortiz said. “I said after the Edison game, we’re not going anywhere. Kids have done a good job bouncing back from each week and learning from each game. Games against Torrey Pines, La Costa, Corona del Mar prepared us for games like this, for games like next week against Mission Viejo. It’s a credit to our kids.”

San Clemente (5-4, 3-0) will host Mission Viejo (4-4, 2-0) next Friday, Oct. 19 for what amounts to be the South Coast League title game. Mission Viejo’s overall record took a hit on Monday, Oct. 8 after forfeiting the first four games of the season due to an ineligible player, but the Diablos are as strong as ever coming off a 31-24 win over Capistrano Valley and a bye week.

San Clemente QB Brendan Costello threw for 300 yards and 3 TDs and ran for another TD as the Tritons beat Capistrano Valley, 35-26, and set up a South Coast League title game against Mission Viejo next week. @SCHSTritons @Tritonfootball @brendancostello pic.twitter.com/MaZN4S6Hry

“We’ve had a lot of emotional losses,” San Clemente quarterback Brendan Costello said. “It’s a big win to be 5-4 now. We’re really excited to move on to the next week. Never satisfied. League championship against Mission Viejo, and it’s going to be really good game.”

San Clemente and Capistrano Valley (6-2, 0-2) were set to play on Friday night before a lightning storm rolled in that decimated the county football schedule. The teams kicked off at 1 p.m. on Saturday afternoon.

“It was a little weird,” Costello said. “The big emphasis through the night was to keep the same mindset we had yesterday. We don’t want to come in sleeping. Come out with more energy than we did last night.”

Despite the mindset, both the Tritons and Cougars began the game a little sluggish.

Capo Valley opened the scoring with a field goal, but San Clemente came back to take the lead on a four-yard TD run by Costello.

San Clemente got a score in just before halftime after Costello hit Jaydel Jenkins on a 50-yard pass and Baggs on a 23-yard touchdown pass to cut the lead to three points.

Costello finished 15 of 25 passing for 300 yards and three touchdowns.

Then the third quarter arrived and the game swung thanks to the Triton defense.

San Clemente forced and collected a controversial fumble on Capo Valley’s opening drive of the half. The Tritons capitalized almost immediately on a 69-yard touchdown pass over the top to Jenkins to retake the lead, 21-17.

The Cougars responded and marched down the field for a 19-yard touchdown pass the grab the lead again, 24-21.

Costello let out another laser on a 48-yard touchdown to Preston Rex for a 28-24 Triton lead.

The San Clemente defense made the lead stand up as Jake Brannon grabbed an interception near midfield. Brannon pulled in another interception in the fourth quarter to stifle Capo Valley’s rally attempt.

San Clemente took control of the game on the ensuing drive, and RJ Donaldson scored on a highlight run. Donaldson ran straight forward into the pile, pulled out, spun and bounced out to the right side. Donaldson beat the Cougars defense on the edge for a 21-yard touchdown and a 35-24 lead.

The San Clemente defense stifled Capo Valley the rest of the way.

The Tritons offense gave up a safety on the final drive while running out the clock.