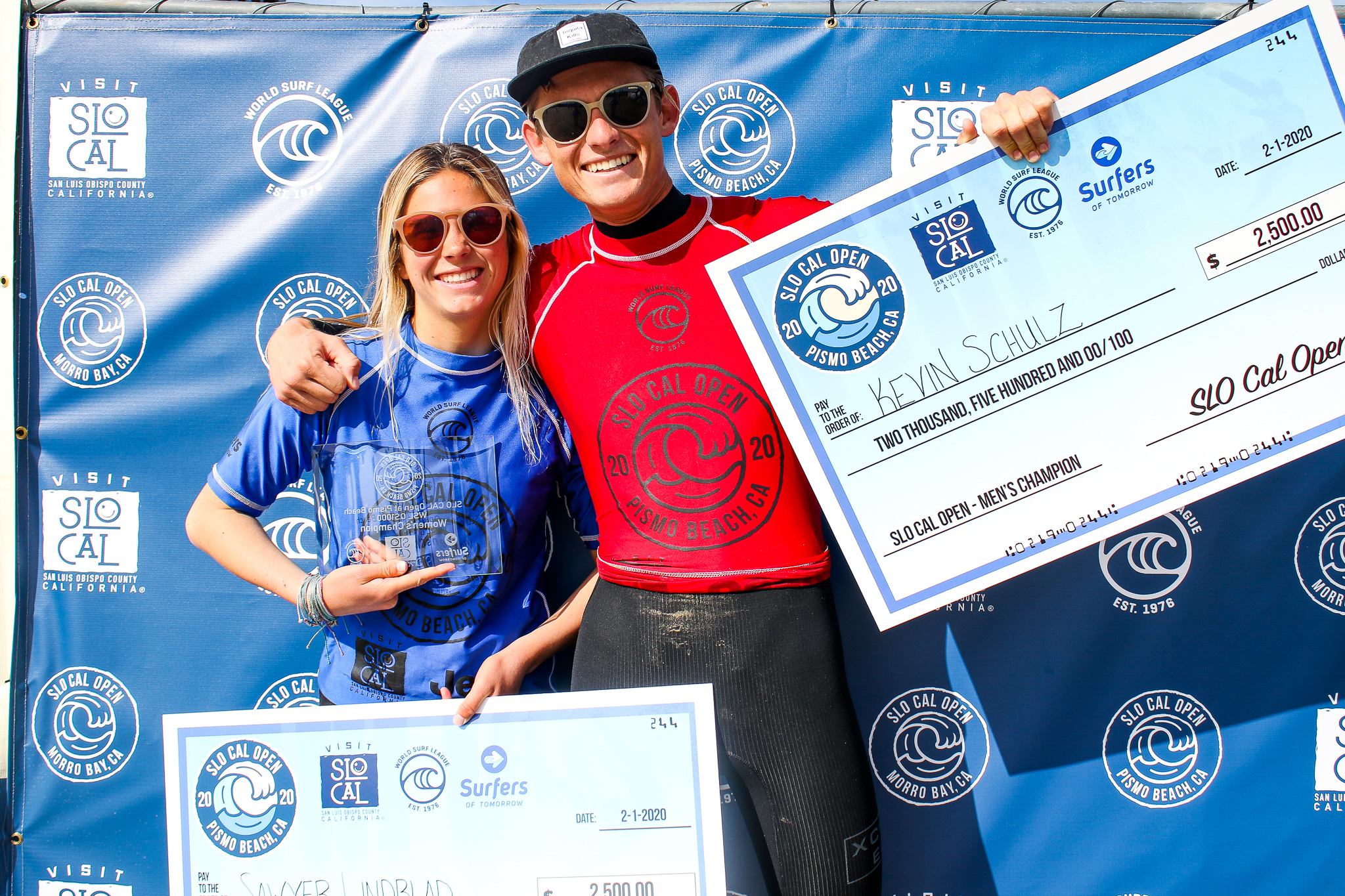 The World Surf League season is off and running, and in these early days, San Clemente has much to celebrate, as Kevin Schulz and Sawyer Lindblad just took out the SLO CAL Open at Pismo Beach.

For Schulz, the win was a moment of sweet redemption. Finishing runner-up at the iconic Central Coast pier the last time the contest was held two weeks ago, this time he did himself one better and topped the podium. His path to victory led him through Huntington Beach’s Brett Simpson—both a childhood idol and his current friend.

“When I made the final, I knew I had to go big, and Brett was always going to be a big challenge to face,” said Schulz. “I just tried to come out of the gates quick. It’s always good to surf against your hero. I’ve looked up to Brett since I was a little kid. And now we’re good friends. To come out and win that final, it’s a dream come true. It’s almost surreal. You want to be excited and pumped, but you don’t know if it’s real.”

“This is my second event win, and it was actually kind of hard to hear out there, so I didn’t totally know what was going on; then when I came in, all the boys were standing on the beach with their hands up, so I knew I’d won at that point,” he added.

For Lindblad, who surfs on the Shorecliffs Middle School surf team, the win in Pismo Beach is a defining moment in her blossoming career. A 14-year-old who’s usually found in the Grom of the Week column, Sawyer made it clear she’s elevating her game by taking out this Qualifying Series contest for her first WSL victory.

“It’s like the biggest thing I’ve ever won; this is like the highlight of my life,” Lindblad said after being chaired up the beach by her friends. “All the girls are so good. It’s just so cool to be able to surf against all of them.”

A member of the U.S. Junior surf team, Lindblad is actually coached by Simpson, which makes the results from last weekend even more interesting.

Making the semifinals of the women’s division was fellow Lowers regular Kirra Pinkerton. The 20-year-old lost out to eventual finalist Meah Collins, but not before posting a great result.

Last year, Pinkerton finished 35th on the WSL’s Qualifying Series and is looking to make a strong charge up the rankings this year. Her eventual goal is to graduate to the elite Championship Tour.

Pinkerton started the year off with a ninth-place finish at the Corona Open China, followed up by her victory in Hawaiian waters at the Sunset Pro Junior.

“It’s always good to get a win in the beginning of the year,” Pinkerton said after her win on the North Shore. “And then coming into this one and taking the win, I’m really looking forward to going to Australia and bettering my results there.”

The WSL’s Qualifying Series will run throughout the rest of the year, so it’s still early, but it’s great to see our local surfers getting a jump on the season and posting some great results.

The Championship Tour doesn’t get underway for another month. The Corona Open Gold Coast at Snapper Rocks will kick off on March 26.

Kolohe Andino heads into the season ranked fifth in the world, coming off the best year of his career in which he contended for a world title. After finishing 2019 ranked 16th in the world, Andino’s buddy Griffin Colapinto will also be back on tour this year.

For what it’s worth, Andino and Colapinto were out at Uppers together last Saturday afternoon and were absolutely ripping. It’s radical how good they are—a couple of the best in the world.