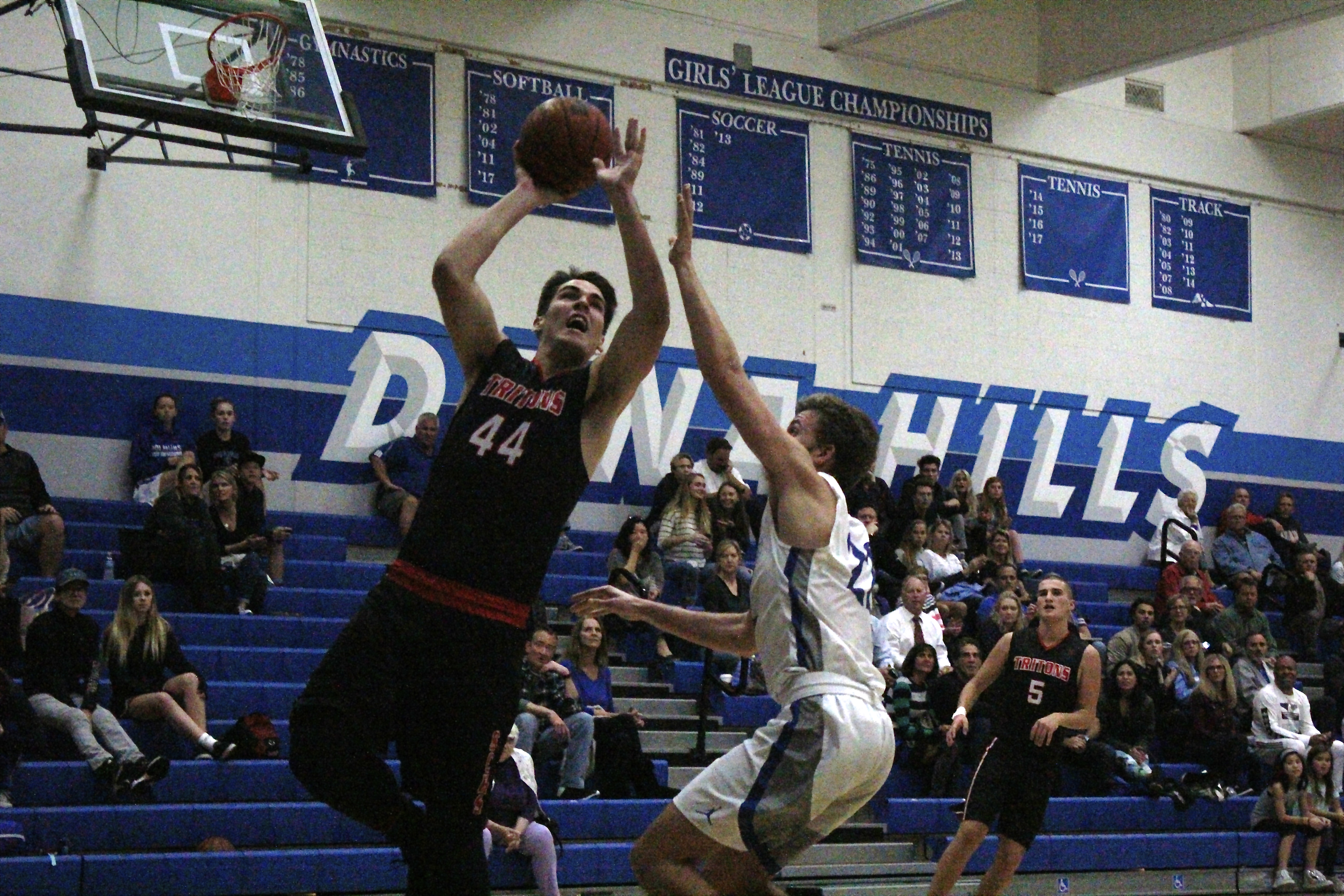 DANA POINT – San Clemente’s calling card is its size and that came to the forefront on Thursday.

San Clemente outrebounded Dana Hills, 30-20, as the big men led the way for the Tritons in shutting down the Dolphins for a nonleague win, 60-42, at Dana Hills High.

“Our defense was awesome tonight,” San Clemente coach Marc Popvich said. “Our rebounding was spectacular. We limited them a lot on the offensive glass. That got us going the other way.”

Jay Baggs scored a game-high 11, and Chris Kane dominated the boards with a game-high nine rebounds. Josh Walker put in an all-around game with nine points and six rebounds.

“They were spectacular,” Popovich said of his big men. “I thought Baggs did an awesome job getting out and running in transition and finishing. (Max) Marshall and Walker did a really good job of being patient underneath and finishing through contact.”

Early on, both teams were executing their offenses how they wanted to.

San Clemente (12-4) scored in transition and down low. Dana Hills (11-7) took long possessions and finished their chances to get the game tied, 12-12, after one quarter.

Then the Tritons defense caught on and slowly pushed out a lead for the advantage at halftime, 26-18.

“Our guys did a better job of being patient,” Popovich said. “We were taking away a lot of things they wanted to do on offense, especially down low. We did a good job of covering up for ourselves.”

The scoring opened a bit in the fourth.

Nick Martino hit back-to-back 3-pointers for San Clemente, but Ben Carr answered for the Dolphins with a three and a steal to a lay-up.

Jacob Nemeth and Reed Romo exchanged 3-pointers to keep the game at a 13-point deficit, but Dana Hills couldn’t get any closer.

“They kept making plays and staying in it,” Popovich said. “Credit to (Dana Hills) for keep fighting the whole way.”

The Tritons (7-9) earned a sweep at Dana Hills as the girls team held on to win the early game.

Dana Hills (8-8) led after the first quarter, but San Clemente pushed ahead for a halftime lead, 25-20.

The Tritons maintained their lead through the third quarter, but in the fourth, things got hairy.

San Clemente had trouble knocking down their free throws, and Dana Hills started hitting their own free throws and finishing chances.

The Dolphins couldn’t fully capitalize with several late chances to tie, and the Tritons breathed a sigh of relief.

Dana Hills will also be at the Run ‘n Gun Against Cancer to take on La Costa Canyon and opens Sea View League play against Mission Viejo on Tuesday, Jan. 9.