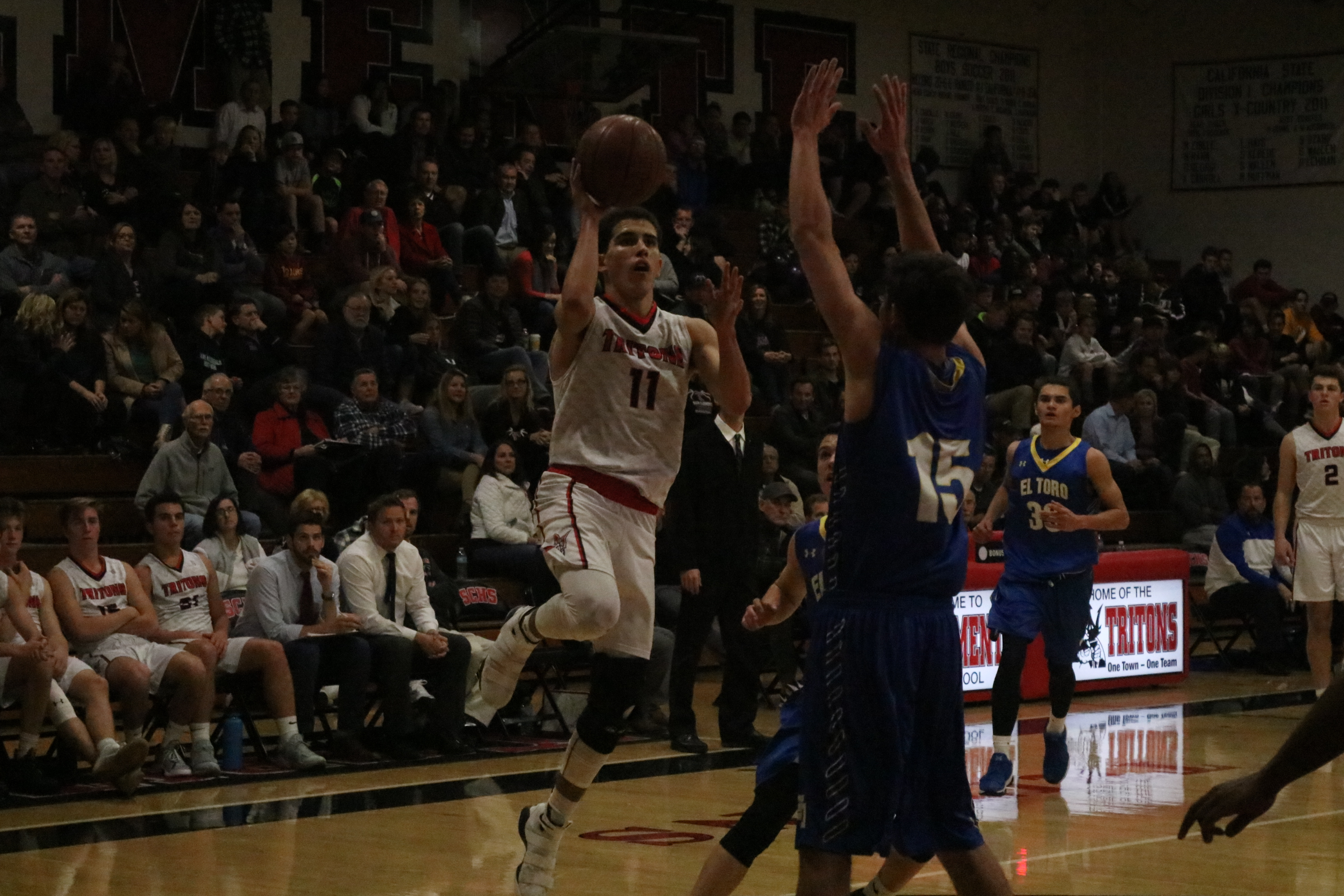 SAN CLEMENTE – Through the first three rounds of South Coast League play, the boys basketball standings were as tight as they could be with one game separating the five teams.

Tesoro, Aliso Niguel and El Toro stood at the top of the league with two wins and looked to get some separation to close out the first half of the league schedule.

The Tritons rode another hot shooting night from Jacob Nemeth and locked down on defense in the second quarter to earn the win over El Toro, 66-45, in a league game at San Clemente High.

San Clemente’s Jacob Nemeth talks about his 27 points and six 3s, the @SCTritonHoops defense, and how the South Coast League is still wide open after a 66-45 win over El Toro. @SCHSTritons pic.twitter.com/TyyAZOUFC1

“Tonight it was mainly about forgetting the past and playing on the next game each and every play,” Nemeth said. “We had to win this game to get ourselves on a roll and end 2-2 in the first part (of league).”

San Clemente (15-7, 2-2) has lost its two league games by a combined four points against Tesoro and Aliso Niguel. The three-time defending champions are still very much in the thick of the league race.

“We know we can win it,” Nemeth said. “We know that if we keep playing as well as we are in these games we’ve been winning. We know that we can compete for the league title.”

Nemeth had his shooting touch right from the start where he hit two of his game-high six 3-pointers in the first quarter. Nemeth scored a game-high 27 points and was just two 3-pointers shy of the school record for threes made in a game.

“A little bit,” Nemeth said when asked if he knew he was close to the record. “I know I’m on track for the season record, but that’s something in the back of my head.”

Then San Clemente’s defense kicked in and the Tritons started driving to the rim on offense.

“I thought we did a great job of getting out on their guys (on defense),” San Clemente coach Marc Popovich said. We cleared rebounds. We talked, we communicated. They didn’t really get any clean looks.”

San Clemente took the lead on back-to-back and-one plays by Jay Baggs and Max Marshall and outscored El Toro, 20-4, to close out the second quarter.

The Tritons maintained through the third quarter and pushed out in the fourth quarter with a 12-2 run to end the game.

The Tritons start the second run through league play at Tesoro on Friday, Jan. 26. San Clemente opened league with a one-point home loss to Tesoro. Tesoro and Aliso Niguel fight for first place on Wednesday.

“It’s really fun, from a competitor’s standpoint,” Popovich said of the tight league. “It’s really going to come down to which team gets better the next half of the league. That’s my message to the team after the game. We can’t be satisfied.”

“This is a great win tonight, we beat a good team and played really well. But we have to keep getting better. Two weeks from now, this isn’t going to get it done.”

Three of San Clemente’s final four league games are on the road. The Tritons host Aliso Niguel on Feb. 2.