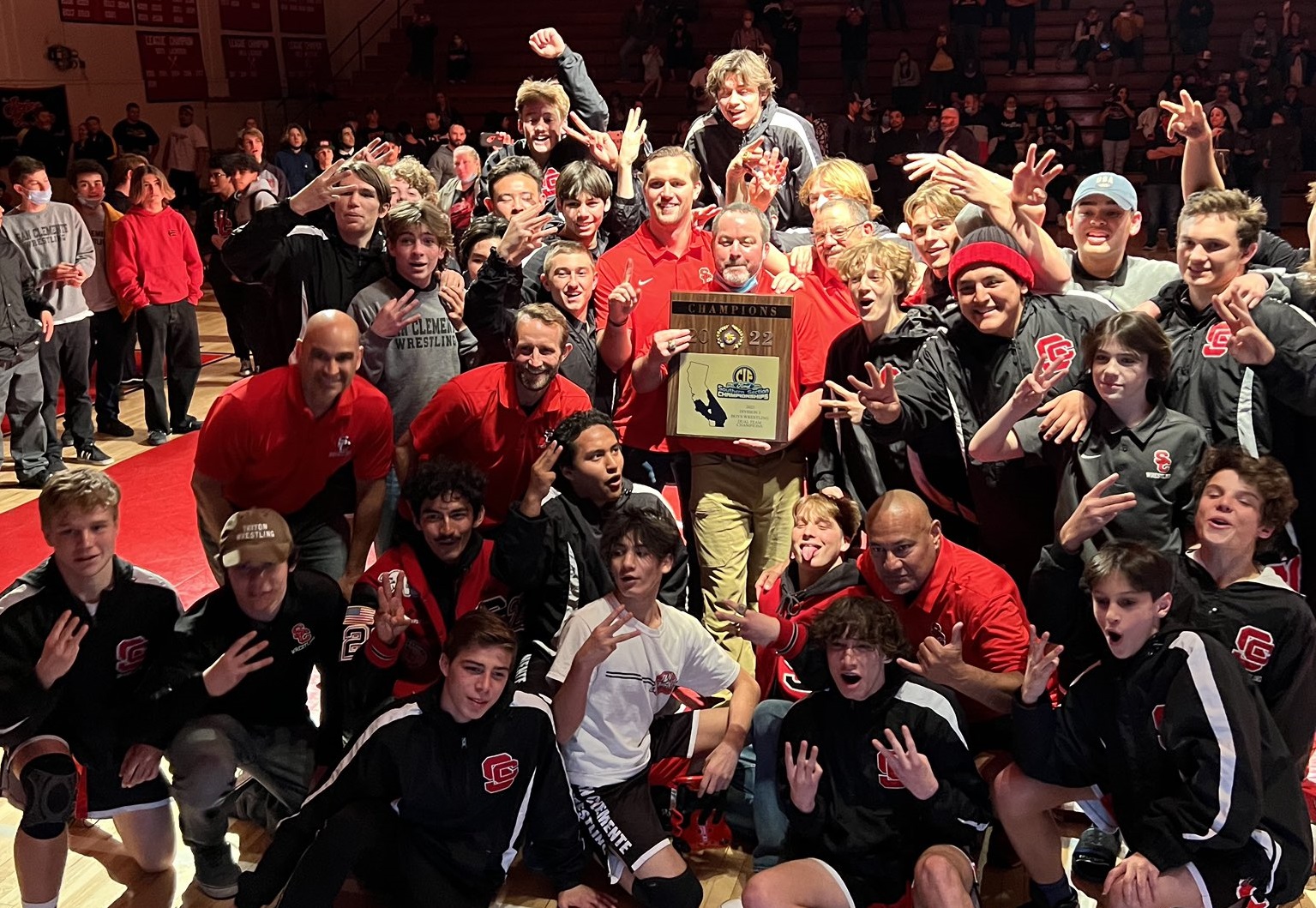 The Tritons had plenty of individual successes and three team titles at the CIF-SS tournament in 2005, 2007 and 2008, and despite such strong groups, San Clemente had never won its way through the playoff-style bracket to win a dual meet title.

Then the Tritons broke through in 2020, and again, San Clemente battled through the trials and tribulations of the 2020-21 campaign to win again.

Now, the Tritons have a dynasty on their hands.

“They’ve been together a long time,” San Clemente coach Mark Calentino said. “As freshmen, they saw us get eliminated by Royal (of Simi Valley) in the semifinals, a team that wasn’t necessarily better than us but they were a team. We were a group of individuals who were pretty tough. The following year we were a group, we were a team, and we’ve carried that through.”

Victor Valley hosted the opening rounds of the dual meet playoffs on Saturday, Jan. 29, and the Tritons pushed through those rounds with similar form. San Clemente earned a first-round bye as the No. 1 seed and beat Camarillo, 54-12 in the quarterfinals.

In the semifinals, San Clemente faced its real test of the tournament in No. 4 seed Chaminade. Chaminade had surprisingly dropped a league match, which in turn dropped their playoff seeding. The Tritons faced the challenge head on with a 37-27 win to advance to the title match.

“Going into the tournament last weekend, we knew that the championship match was going to be in the semifinals. Chaminade was the only team capable of beating us,” Calentino said. “Coming in tonight I know that (Victor Valley had) a younger team. They have a tough group of kids, but I knew that if we wrestled well that this would be ours.”

Victor Valley actually took the first match of the evening on Wednesday with a pin at 128 pounds, but then San Clemente hit the gas and pulled away.

Jacob Belden won with a quick pin at 134 pounds to tie the match, 6-6, and then Dominic Morales put the Tritons ahead at 140 pounds. Morales, who hyperextended his elbow in the matches last weekend, earned a decision win, 8-3.

“I started passing out the new championship white singlets and he said, ‘Coach, I am going to go,’” Calentino said. “Coming out here and having to wrestle a pretty darn good kid and effectively only using his one arm, that was Spartan.”

At 147 pounds, Garrett Boyd put out a dominating effort. Boyd worked up to a 14-2 points lead before ending the match with a definitive pin victory. At 154 pounds, Matt Valdez battled through several stoppages due to his own bleeding to take a 12-4 decision.

Indiana Fightmaster won a 6-2 decision at 162 pounds, which put San Clemente up, 22-6, and gave Calentino the full confidence that the Tritons were going to take the title.

The assumption was correct as San Clemente scored four consecutive pins from there.

Vance Fabrasillo scored a pin in 32 seconds at 172 pounds, Robert Maley won in a 3:27 pin at 184 pounds and it was Cole Robertson’s 33-second pin at 197 pounds that officially clinched the meet and the championship for San Clemente, 40-6.

Fernando Llanos made the Tritons’ fourth straight pin in 1:03 at 222 pounds, and Santino Nonaca rounded out the San Clemente scoring with a 10-3 decision at 108 pounds.

San Clemente now looks to take its momentum into the CIF-SS individual championships with the Eastern Division tournament on Feb. 11-12 at Temecula Valley High School.

“I’d like to see 10 medalists. I’d like to see 10 kids go through to Masters,” Calentino said. “I think all 13 guys getting into the tournament have the ability to score points. We’re in with Temecula Valley and Calvary Chapel, so a CIF championship would be difficult, but anything is possible.”

All 13 of San Clemente’s varsity starters qualified for the CIF-SS tournament out of the Coast View Athletic Association tournament, where the Tritons won another title by a large margin.