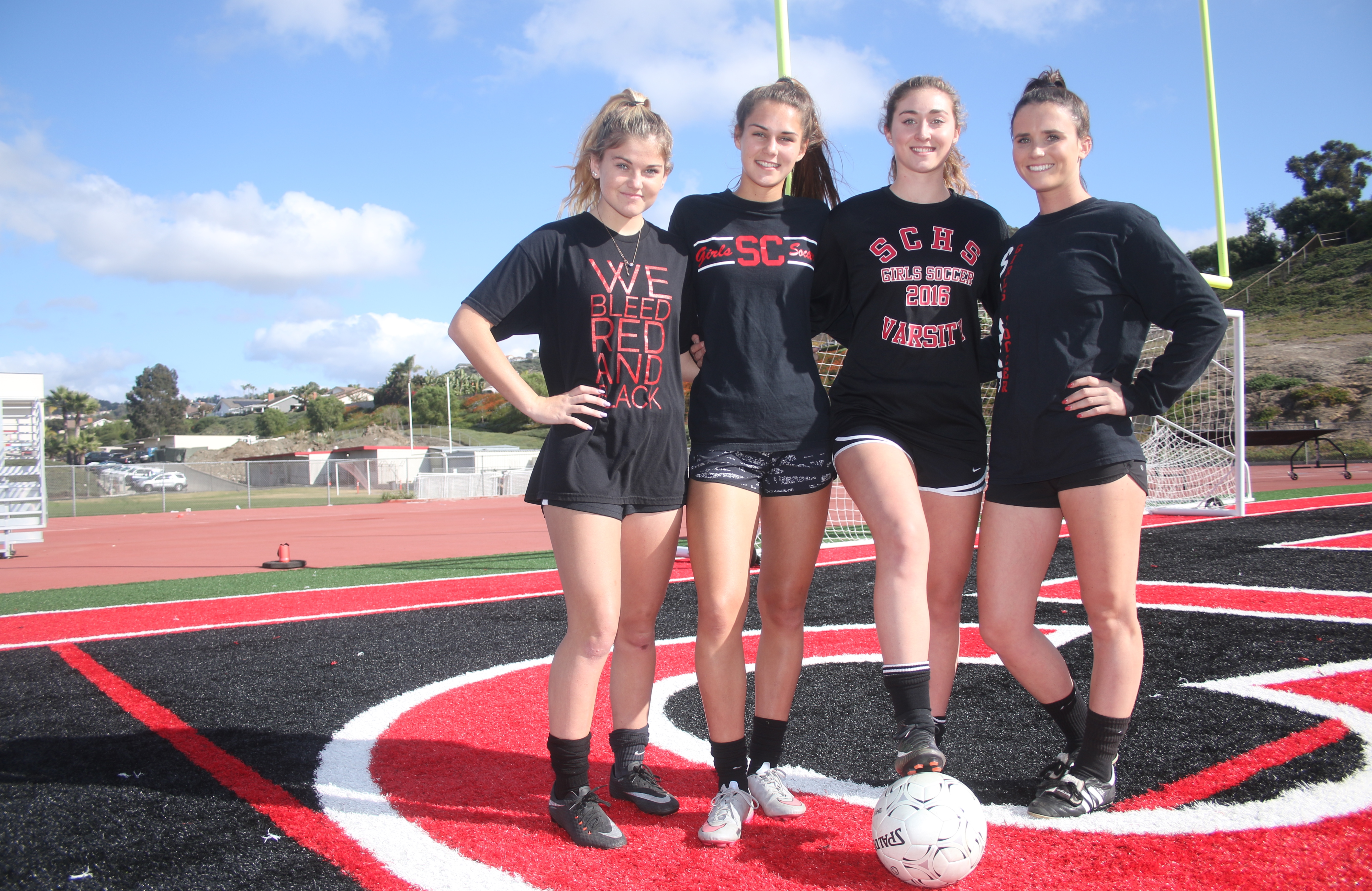 The San Clemente girls soccer team is looking to come together quickly. The Tritons graduated a large group of seniors last year and the new-look group had just a few practices under its belt, including two nonleague games, before heading to compete in the Desert Mirage Soccer Tournament this weekend.

The Tritons’ defensive unit allowed an average of just one goal per game last year and several key pieces from that group return.

Senior goalie Kelsey Bland will look to fill the shoes of graduated All-American Lauren Brzykcy, who is off at UCLA. Bland, who is committed to Chapman University, has stepped ably into the role of team leader, according to coach Lauren Leslie.

The Tritons return their two starting center backs in Molly Engel and Gabi Drabkin. Engel is a four-year letterman and was an All-South Coast League selection last season.

Karla Rodriguez, a talented freshman, will provide a spark on offense.

San Clemente will also play in the high-profile Mater Dei Premier Invitational and the Foothill Excalibur tournaments before entering the South Coast League, where they placed second last season.

An influx of academy players and a core group of returning players are determined to take the San Clemente boys soccer team back to its standing as a Southern California powerhouse this year.

Senior midfielder/forward Tristan Weber, who grew up as a Tritons ball boy, is joining the squad after spending the last year in the U.S. Men’s National Team’s U17 Residency program. Coach Mike Pronier believes Weber’s skill playing through the middle and up top will ignite an offense that scored just over 1 1/2 goals per game last year.

Sophomore defender K.C. Smith and junior defender Liam Linas are other academy players that have joined the Tritons’ ranks.

“These returning kids are highly motivated to have a good season. And you throw in a few extra players … we just have a good feeling about the season,” Pronier said. “It’s probably as good as a team as we’ve had in three or four years.”

The Tritons will host the annual Lotto-Sport Western Showcase tournament, which features high-profile teams from across the country, starting Thursday, Dec. 14.

The San Clemente boys basketball team will enter the new year with a target on its back.

The Tritons are the three-time defending league champs and will eye a rare four-peat in the competitive league in the coming months.

San Clemente boasts an impressive array of size and athleticism, allowing the Tritons to play with a faster tempo. Five players on the Tritons’ roster stand at 6-feet-5-inches or taller, including returning senior Chris Kane. Kane averaged nearly five points and three rebounds one year ago and will carry a larger workload this season.

“In our league, teams might have one big guy but I don’t think they have the depth that we have,” coach Marc Popovich said. “I think that’s where our advantage lies on both ends.”

Senior guard Jacob Nemeth will be a key contributor after averaging five points and two rebounds as a junior.

In the South Coast League, teams like Trabuco Hills and Aliso Niguel return plenty of impact players. The competition for the league hardware, as usual, will be tough.

“I told the kids that everybody is gunning for us. Nobody thought we’d win (league) last year but we found a way to do it,” Popovich said. “I have no intention of giving this league back to anybody at this point so we’re going to come ready to play. I think we’re a tough matchup for everybody in our league.”

When looking at her team on the court during a recent offseason practice, San Clemente girls basketball coach Kerri Husbands was proud to point out just how many of her players shine in different sports on campus.

The Tritons, who return four of five returning starters and several key contributors from last year, are full of multi-sport athletes. The players’ discipline in other sports has made for one unique, and athletic, bunch of players.

“We’ve got swimmers, a soccer player, volleyball players, softball, equestrians, cross country runners,” Husbands said. “It just leads to a better athlete in general and that’s what we have.”

Eight players with considerable experience reutn. Five of the players are seniors, including Kelsey Murphy, Shae Waters and Morgan Thomas.

San Clemente will play in the upcoming South Coast Tournament, the Valley Christian Tournament and travel to San Diego before opening South Coast League play. The Tritons finished in a tie for second place in league last season.

In his 27th season as the head coach of the San Clemente wrestling program, Mark Calentino will send perhaps his youngest Triton team yet to the mats.

San Clemente returns just two seniors to the fold and a handful of talented juniors. The Tritons have a large, and impressive, group of freshmen and sophomores that will likely see time wrestling with the varsity.

“This may be the youngest group of kids we’ll put on the mat at the varsity group ever,” Calentino said. “A key thing is that this freshmen and sophomore group is phenomenal. We’re going to take our lumps, but we have a group of kids that are willing to work hard and fight. The sky is the limit in the next few years.”

Despite the young roster, the Tritons return veterans Josh Tabb, a two-time senior CIF qualifier, and Will Eldrige, also a CIF qualifier.

The San Clemente girls wrestling team has picked up steam since its inaugural season three years ago. And while the team lost a few key wrestlers to transfer, there is a strong group returning with their eyes set on lofty goals.

“As a whole, the best thing they do is they’re aggressive,” Owens said. “Most of them have the personal goal of getting to state and I think they’re capable of getting there.”

Leading the way on offense will be returning center Allison Echelberger, junior Brooklyn Aguilera and sophomore Caroline Christl. The group was part of a San Clemente offense that scored nearly 11 points per game last season.

On defense, the Tritons will be led by two-meter defender Grace Pelkey and senior goalie Sophia Noble.

“We’re going to push on the counter attack and have a lot of movement in the halfcourt,” coach Logan Powell said. “Our goal is to win league again and I think we can make a deeper run in the playoffs.”

San Clemente advanced to the first round of the CIF-SS Division 1 playoffs last season.

The Tritons will open their season with a road match against Edison on Thursday, Nov. 30.