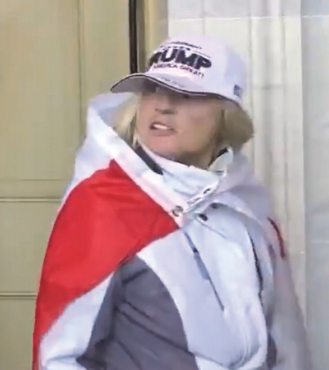 Social media and video footage of the Jan. 6 insurrection in Washington, D.C. has led to the arrest of a San Clemente woman accused of unlawfully entering the U.S. Capitol building on the day of the riots.

On Monday, June 28, 69-year-old Lois Lynn McNicoll was charged with knowingly entering or remaining in a restricted building or grounds without lawful authority, as well as disorderly and disruptive conduct with the intention to impede government business, according to a federal complaint.

According to FBI spokesperson Laura Eimiller, McNicoll was arrested at her place of business in the City of Industry. She had her first federal court appearance in Los Angeles, where she was later released on a $10,000 bond.

Authorities were tipped off to McNicoll’s alleged breach of the Capitol by two witnesses who, in a social media post, identified her as a Los Angeles County Department of Public Social Services employee, wearing a white hat adorned with the former President’s name, “TRUMP.”

The social media post, which originated from the news station ABC7, also showed McNicoll wearing a white and gray jacket while a red and white flag was draped over her shoulders, the complaint showed. The caption read, “Trump supporters exit the U.S. Capitol Building.”

Both witnesses, fellow DPSS employees, had separately submitted the same screenshot of the post to the FBI’s national tip line, and were each later interviewed by an agent, confirming McNicoll was captured in the image.

According to the complaint, an affidavit, the FBI agent handling the case reviewed surveillance video of the riot from the Capitol’s CCTV, focusing on an area referred to as Senate Wing Door, where a large group of people had entered through windows and doors that had been broken open.

“At approximately 2:55 p.m. … the video shows the defendant—dressed the same as in (the image)—entering the building and standing near the doorway,” the affidavit said. “In the video, the defendant appears to take pictures or video with a cellphone she removes from inside of her coat.”

Other security footage from the day provided a clearer look at the flag draped over McNicoll’s shoulders—a modified California state flag that said “TRUMP COUNTRY” instead of the traditional “CALIFORNIA REPUBLIC.”

“After putting her phone away, the defendant walked down a hallway leading south toward the Capitol Crypt,” the complaint further explained. “The defendant stopped and observed the crowd before continuing.”

Later, authorities can be seen in the video ushering McNicoll and others who had been in the Crypt out of the building, toward the southeast plaza, or Memorial Doors, according to the court filing.

In a May 18 interview with the FBI, McNicoll explained that after learning from YouTube that former President Trump was set to give a speech on Jan. 6, she opted to travel to Washington, D.C., making the trip just after New Year’s Day.

After Trump’s speech, “she then marched to the Capitol with a large group, walking up the stairs of the Capitol building and entering through doors that had already been forced open,” the complaint said of her explanation.

“The defendant claimed that at that point, she was somewhat unaware of what was going on around her,” the filing continued. “The defendant further stated that she recalled walking around an area she referred to as ‘the Rotunda.’ ”

The FBI noted that McNicoll was likely referring to the Crypt, not the Rotunda.

According to the affidavit, McNicoll denied using her phone to take photos and video from inside the Capitol. McNicoll, later in the interview, confirmed that she was the one pictured in the social media post.

She also explained to the FBI that she had visited the Capitol building about five years earlier, as she had been granted a visitor credential from her state representative. She also recalled having to go through metal detectors before entry during that previous visit.

The charges against McNicoll come weeks after fellow San Clemente resident Alan Hostetter was indicted on multiple federal charges related to the breach of the Capitol.

Hostetter, a local conservative activist who led multiple anti-lockdown rallies during the pandemic, faces charges that include conspiracy, obstructing an official proceeding, and unlawful entry on a restricted building or grounds.