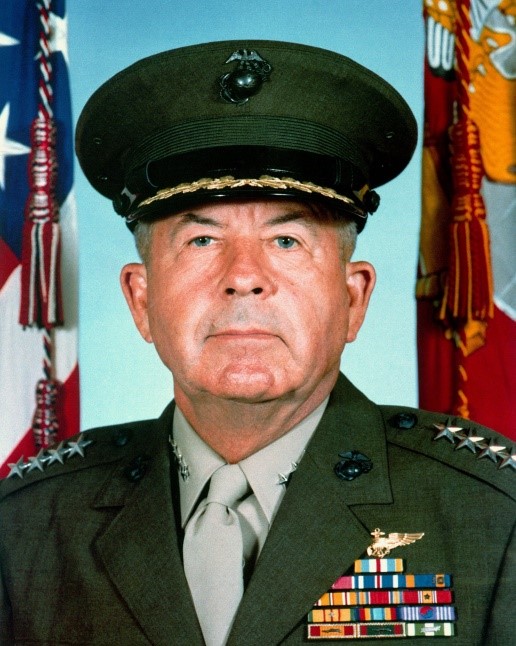 General John Kerry Davis, longtime San Clemente resident and former assistant Commandant of the United States Marine Corps, has died at the age of 92. Davis was a retired, highly decorated four-star general who served in the U.S. Marine Corps from 1945 to 1986.

“He was a legend as far as Marine Corps aviation goes,” said Larry Rannals, a friend, retired U.S. Marine Corps Lt. Col. and fellow aviator. “Everybody that’s ever known him, served with him or worked with him just worships that man. They think the world of him because of the kind of leader he was.”

Rannals and Davis met after both were retired and moved into the same neighborhood in San Clemente.

Eichner, Davis’ youngest daughter, said her father had prostate cancer when he passed.

She said Davis was well-loved by friends and family. “It was truly a village that took care of him,” said Eichner, who spent the last year living with her dad and helping take care of him. “Anytime, I could call one of his friends, and they would be there to pick him up,” she said.

Davis was a member of the San Clemente Exchange Club and a longtime member of several Marine Corps and aviation associations, including The Golden Eagles. Davis also liked to play golf every Wednesday at San Clemente Municipal Golf Club.

The family celebrated the General’s 92nd birthday in March with more than 100-plus people attending the party at Adele’s. “He loved the Marine Corps and his friends and family. He always had a good story and really looked at the good in people,” said Eichner.

After learning of his passing, Wayne Eggleston, executive director of The Heritage of San Clemente Foundation, attested that General J. K. Davis was instrumental in the development of The Marine Monument at Park Semper Fi. He chose the design for the statue and was involved in the park’s design.

“He always led the Pledge of Allegiance at every Memorial Day and Veterans Day Ceremony since 2005,” said Eggleston, “His legacy and inspiration will live on at Park Semper Fi for countless generations to come.” The local Exchange Club dedicated a plaque in Davis’ honor and a garden at Park Semper Fi was also dedicated to him.

Born on March 14, 1927, in Hagon, New Mexico, Davis graduated from Albuquerque High School in 1945 and enlisted in the Marine Corps Reserve. He held a bachelor’s degree in social studies from the University of New Mexico (1950) and an M.P.A. in Public Administration from George Washington University (1963).

Davis has flown more than 30 different aircraft for the U.S. Marine Corps and flew 285 combat hours in the Republic of Vietnam (160 at night) and 171 combat missions (100 at night), according to Eggleston.

A memorial service for General J.K. Davis is still being arranged by his family.