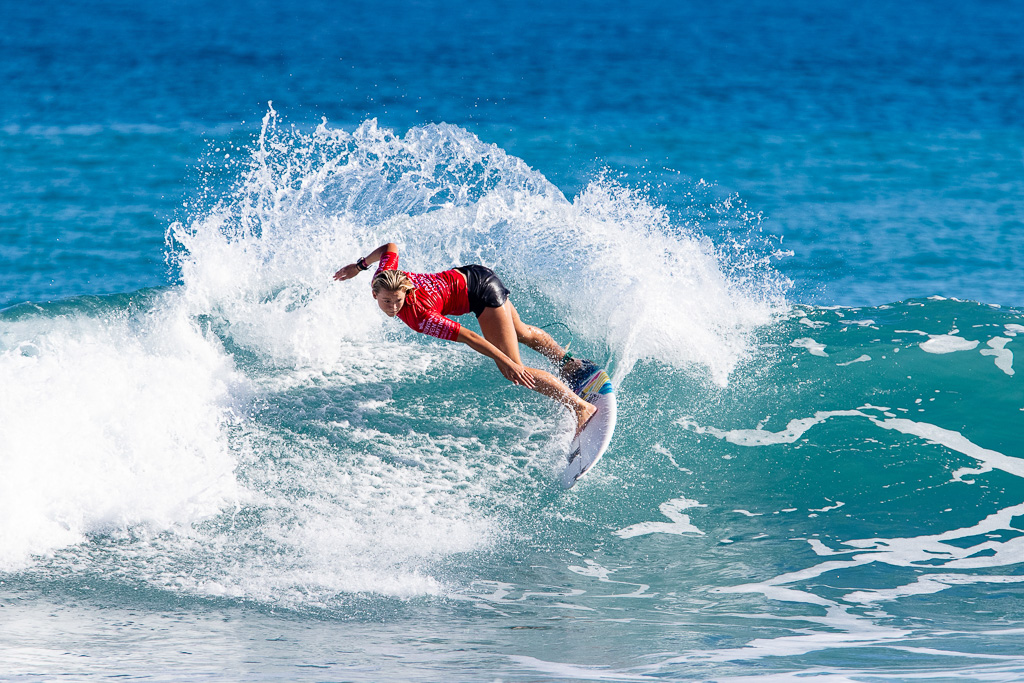 “Kirra Pinkerton surfed with poise and composure beyond her years, chasing down scores in the dying minutes in each of her Finals Day heats,” the WSL report stated. “In the final, Pinkerton held a strong lead for the first half of the match up until Tomoda-Bannert found a perfect left which she smashed 4 massive turns on. The judges loved the young Hawaiian’s commitment and awarded her an 8.20, leaving Pinkerton to yet again chase an almost excellent score. With less than 2 minutes left on the clock, Pinkerton also found a left and got to work on her backhand to snatch back the lead. Tomoda-Bannert had one more shot before the buzzer sounded but it wasn’t enough, leaving the young San Clemente native to claim her maiden World title.”

The WSL characterized the 16-year-old Pinkerton’s season as “stellar,” as she won the WSL North America Junior Qualifying Series (JQS), a runner-up and an equal fifth place finishes. But her win at Jinzun Harbour is the mantle victory of her career thus far.

“This hasn’t really sunk in yet so I don’t even know if this is real,” Pinkerton said. “My goal when I came to this event was to win it so I’m pretty proud that I got here. It’s been a really intense day today as there were so many close heats I didn’t think I’d make. I’ve had such an amazing time here in Taiwan, it’s a beautiful coastline and the waves have been so fun, really similar to my home around San Clemente so it really suited me.”

Pinkerton had to take down fellow San Clementean Samantha Sibley in the semifinal, which was no easy feat, as Sibley posted some of the highest waves and heat totals throughout the event.

“This has been an amazing year with some good results and plenty of experiences on the JQS and QS around the world. This is definitely the highlight of my career,” Pinkerton told WSL. “To be a WSL World Champion feels amazing.”

San Clemente Times will follow up with Pinkerton in the Dec. 13-20 edition.