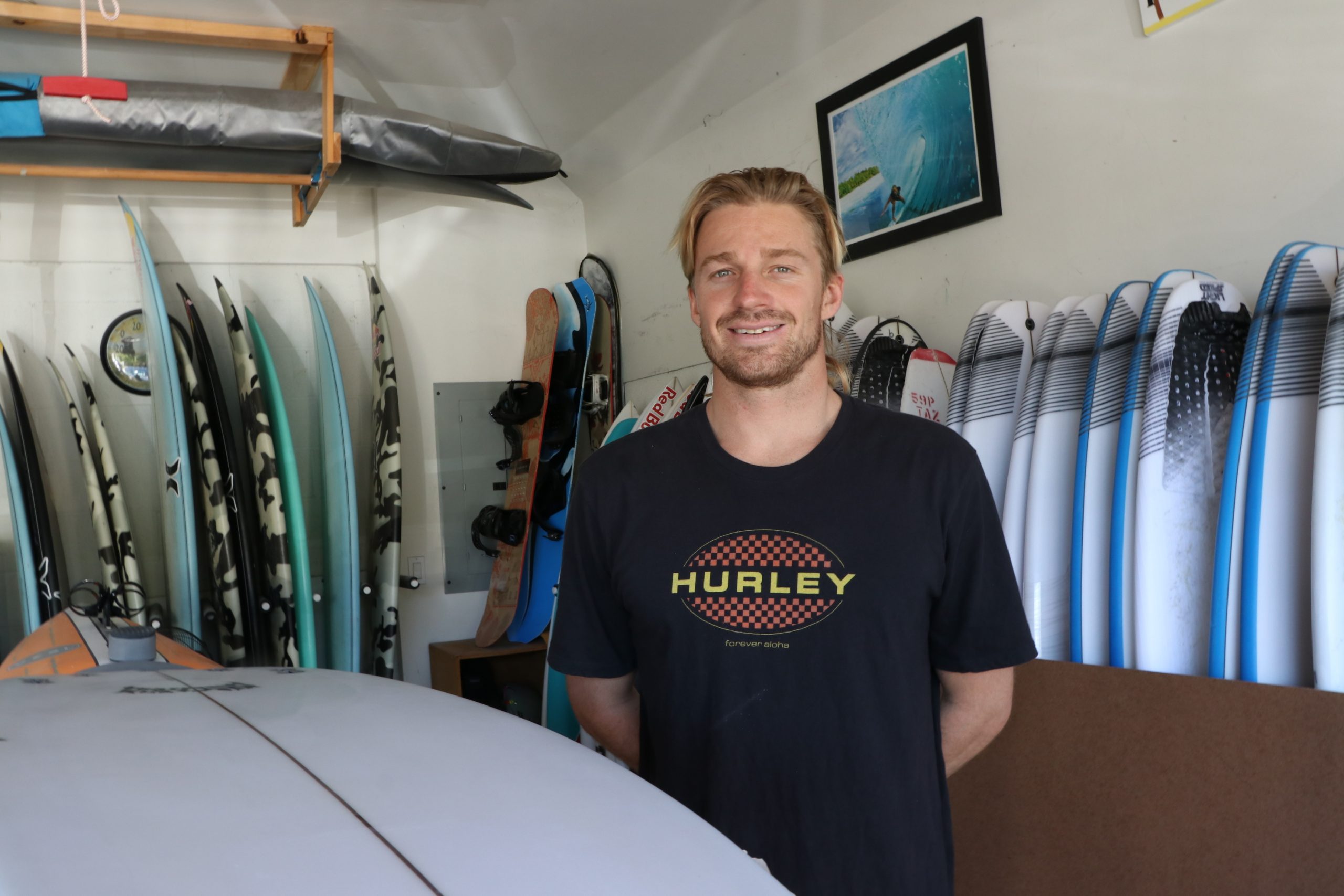 For San Clemente’s Kolohe Andino, his upcoming Olympic moment has been a long time coming.

Andino’s father, Dino, is a San Clemente legend and former U.S. National Champ. In the 1980s and ’90s, he, Matt Archbold and Christian Fletcher stood at the forefront of a new, radical, progressive brand of surfing. And from the earliest of ages, a young Kolohe was pegged to be one of surfing’s next great superstars.

Learning to surf in the lineup at T-Street and Lowers alongside friends such as Luke Davis and Ian Crane, Kolohe and his cohorts, like the generation before them, all faced pressure and scrutiny of being in the spotlight at a young age.

But the elder Andino instilled a strong work ethic and respect for others in his son from a young age. And today, Kolohe Andino, one of the most established surfers on the Championship Tour and a soon-to-be Olympian, stands as an amazing role model for the groms in town.

And not only does the former San Clemente prodigy have the long-awaited Olympics to look forward to, but in the not-too-distant future, he’s going to be living that dad life, as he and his wife Madison are expecting the arrival of their first child—a girl.

“We’re so excited. It’s going to be an entirely new challenge and experience,” Andino says.

“I get fired up thinking about how there’s going to be three generations at Lowers,” he adds.

FROM GROMS TO GREATNESS

Meanwhile, Andino and Team USA members John John Florence and Carissa Moore, who both hail from Hawaii, have been on the Olympic road together for almost two decades now. All identified as the leaders of America’s next generation of surfers very early on in their young careers, true to form, they’ve collectively lived up to the hype.

“The first final I ever did at NSSA Nationals, I was 8 years old, Carissa got third and John got first. I got fifth. She beat me,” says Andino, laughing. “It’s been cool to be on this journey with them.”

Now, all three of them, along with 19-year-old Caroline Marks, a former Floridian who now also resides in San Clemente, will anchor the first-ever U.S. Olympic surf team as they head to the Tokyo Games for the surf competition (July 25-Aug. 2).

All three surfers compete on the WSL Championship Tour, and while Moore is enjoying a career year in which she’s currently ranked No. 1 in the world, both Andino and Florence are facing an uphill battle as they work to recover from injuries that have threatened their appearances in the Games.

Andino’s injury goes back to a surf session he shared with Florence at Pipeline last winter.

“I pulled into one of the bigger barrels I’ve ever gotten, and the wave just clamped on me,” Andino explains. “It must have bent out to sea at the last minute and just got me. My ankle was kind of swollen, but not bad.”

The waves continued to fire, and like any surfer worth his salt, Andino kept surfing.

“Then I came home, no one thought it was that bad, then I got an MRI. Turns out, it was pretty bad,” he continues.

Suffering ligament damage and a high-ankle sprain, Andino got down to rehabbing the injuries. Figuring he was good to go, at the start of April he left for Australia for a four-event run. But as part of the travel restrictions, Andino and all other traveling surfers had to endure a two-week quarantine period alone in a hotel room.

“It was feeling good—until I tried to stand up on my board. It hurt so bad,” Andino says. “It was some of the worst pain I’ve ever felt. It was my first surf after quarantine, and my ankle just blew up.”

“I knew I was done for the Australia leg, so I sacked up, called it off for the next four events and came home.”

Once back home, Andino began the rehab process all over, but things were slow to improve. More X-rays and MRIs revealed he was going to need surgery to properly repair his ankle. So, he went under the knife to repair ligament and cartilage damage.

Meanwhile, Florence had been looking strong competing in Australia until he suffered a knee injury at Margaret River in May. Like Andino, the injury required surgery to repair.

“The procedure I had will give me the opportunity to surf at full strength sooner than I had hoped,” Florence explained via his Instagram account. “Feeling motivated to really know that the Olympics are attainable. I’m excited for this, and I’m gonna do everything I can to make it happen!”

That left the men’s U.S. Surf Team in tatters, as both surfers’ return to the water in time for the Olympics was not guaranteed. Eleven-time World Champion Kelly Slater was recently named the team backup in case Andino or Florence isn’t ready to go in time.

“I’m optimistic,” says U.S. Medical Director Kevyn Dean, who is based in San Clemente. “These guys are healing mutants. They’ve been through injuries before and know what it takes to come back and be game-ready.”

As his recovery continues, Andino is also optimistic. He’s back in the water surfing again and sees a clear path to the Olympics.

“My goal is kind of North Shore-style, like the movie, where I have to ride every board down to get to my 5’10”, which I’ll probably be riding in Japan. I started on the longboard, then moved down to a 6’10” with 40 liters of volume. Then I’ll go down to a 36-liter board, then 33 liters, 32, 31,” Andino explains. “Those longer, bigger boards don’t allow me to turn like I do on my shortboard, so even if I’m excited, it slows me down; it’s good.”

“For me, I’d like to be riding my normal board by July 1,” he continues. “It’s the perfect amount of time to go slow but also be ready for Japan. In the past when I’ve come back from injuries, there was pressure to be ready quick. But with this, I can go slow. And because it’s mapped out, I know where I’ll be—like by the second week of July, I’ll be trying airs and doing all my stuff. I think we leave for Japan on the 15th.”

The opening ceremonies for the Tokyo Olympic Games will take place on Friday, July 23. The surfing portion of the Games will take place at Tsurigasaki Beach, about 40 miles east of Tokyo. A swell magnet, the break has been described as being similar to Newport Beach, with shifting sandbars among a series of jetties.

In total, there will be 40 surfers from around the world competing, with a maximum of two men and two women allowed to represent their countries.

“This has been something that’s always kind of been out there, but it’s starting to feel a lot more real now,” Andino says. “I’m psyched.”