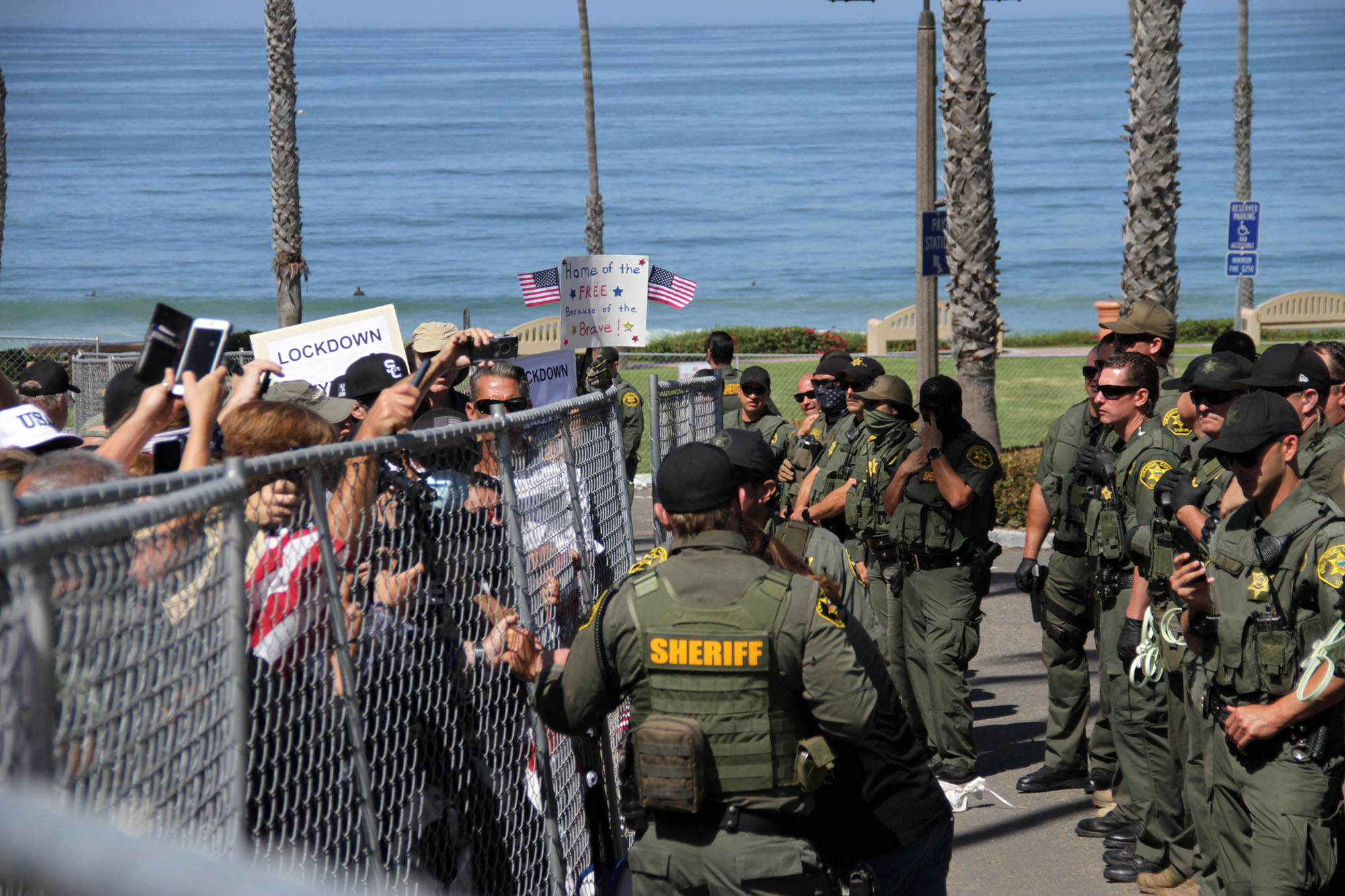 It still remains unclear how city leaders will respond to Orange County Sheriff Don Barnes’ threat to pull patrol out of San Clemente more than a week ago.

On Friday, May 22, San Clemente interim City Manager Bob Dunek received a letter from Barnes stating that the city’s actions have made providing law enforcement extremely difficult. The previous day, multiple individuals were arrested at the Pier Bowl parking lot after a protest over the chain-link fencing surrounding the lot used to deter visitors from overcrowding the beach escalated when demonstrators stormed the fencing and others refused to disperse.

“The City Council’s past and recent actions, or, at times, inability to act or provide direction, has made the manner in which we provide law enforcement extremely difficult,” Barnes wrote. “The City, through its Council and executive team, has made decisions that are inconsistent with our values and principles for community-oriented policing. The results of these decisions have and are placing the department at odds with the community we serve.”

Barnes goes on to say that the incident at the Pier Bowl parking lot could have been avoided.

About 200 people had gathered at the Pier Bowl area to protest or help tear down the fence enclosing the parking lot, resulting in eight individuals being arrested for vandalism, trespassing or other crimes, according to OCSD.

The city had kept its beachside parking lots closed throughout the public health crisis as part of an effort to limit visitation and prevent overcrowding, in turn trying to stem the spread of coronavirus.

Barricades were initially used at the Pier Bowl parking lot, but later the city put up fencing. Dunek explained to the city council on Tuesday, May 19, that the fencing was being used because motorists had been moving the barricade and parking in the lot, prompting the cars to be towed.

Beachside parking was reopened to full capacity beginning Friday, May 29.

“I could initially act as the City Council had not preempted the range of ways by which to close the parking lots which it had previously directed,” Dunek told the San Clemente Times in an email. “We initially closed the lots with barricades, but those were ineffective and required constant monitoring, citations, or towing violators. Consequently, the fences were a less labor-intensive and cheaper way by which to keep the parking lots closed.”

Mayor Pro Tem Laura Ferguson said she agreed with OCSD that the fencing should have been removed prior to the demonstration.

According to email correspondence obtained by San Clemente Times, Dunek explained to Ferguson that the city would need council approval to remove the fencing.

“It doesn’t quite make sense to me that the interim city manager would be authorized to put up the fencing but would need a council vote on removing the fencing,” Ferguson said. “I tried to request a special meeting; I did not hear back from enough councilmembers to meet quorum.”

According to Ferguson, only Councilmember Gene James responded that he was available. Without quorum, council could not hold a meeting regarding the fencing. Ferguson ran into the same issue when the city received Barnes’ letter.

“Eight people were arrested at that protest. Look at the manpower that had to be there,” Ferguson said. “That could have gone somewhere else had we just removed the fencing and kept the parking lot closed with barricades.”

Council met for a budget workshop on Wednesday, May 27, and Ferguson had hoped to also schedule a special meeting beforehand to discuss Barnes’ letter, to no avail.

“Sheriff Barnes was correct in calling out city council in his letter,” Councilmember James told SC Times. “There is no doubt this council is dysfunctional, as evidenced by the fact I have called for an Emergency Meeting three days in a row subsequent to the Barnes letter and for whatever reason, we still have not met.”

James added that the matter is not just regarding a fence, but a larger problem.

“Our council is suffering from a lack of leadership with an outrageous array of petty squabbles and agendas,” James said. “It is now incumbent for each of us not to point a finger of blame at the others but to look inward with circumspect and endeavor to do the work of the citizens of San Clemente.”

“Rather than criticizing Sheriff Barnes for his threat to terminate the contract, his admonishment should serve as a wakeup call for all four council members to serve the greater good of San Clemente,” James said. “If we do not, none of us deserve to serve another day. This council owes apologies to Sheriff Barnes, the deputies and the people of San Clemente. This unfortunate event with the demonstration at the fence was entirely avoidable.”

Councilmembers Kathy Ward and Chris Hamm have not yet responded to requests for comment. OCSD’s contract with San Clemente runs through June 30.