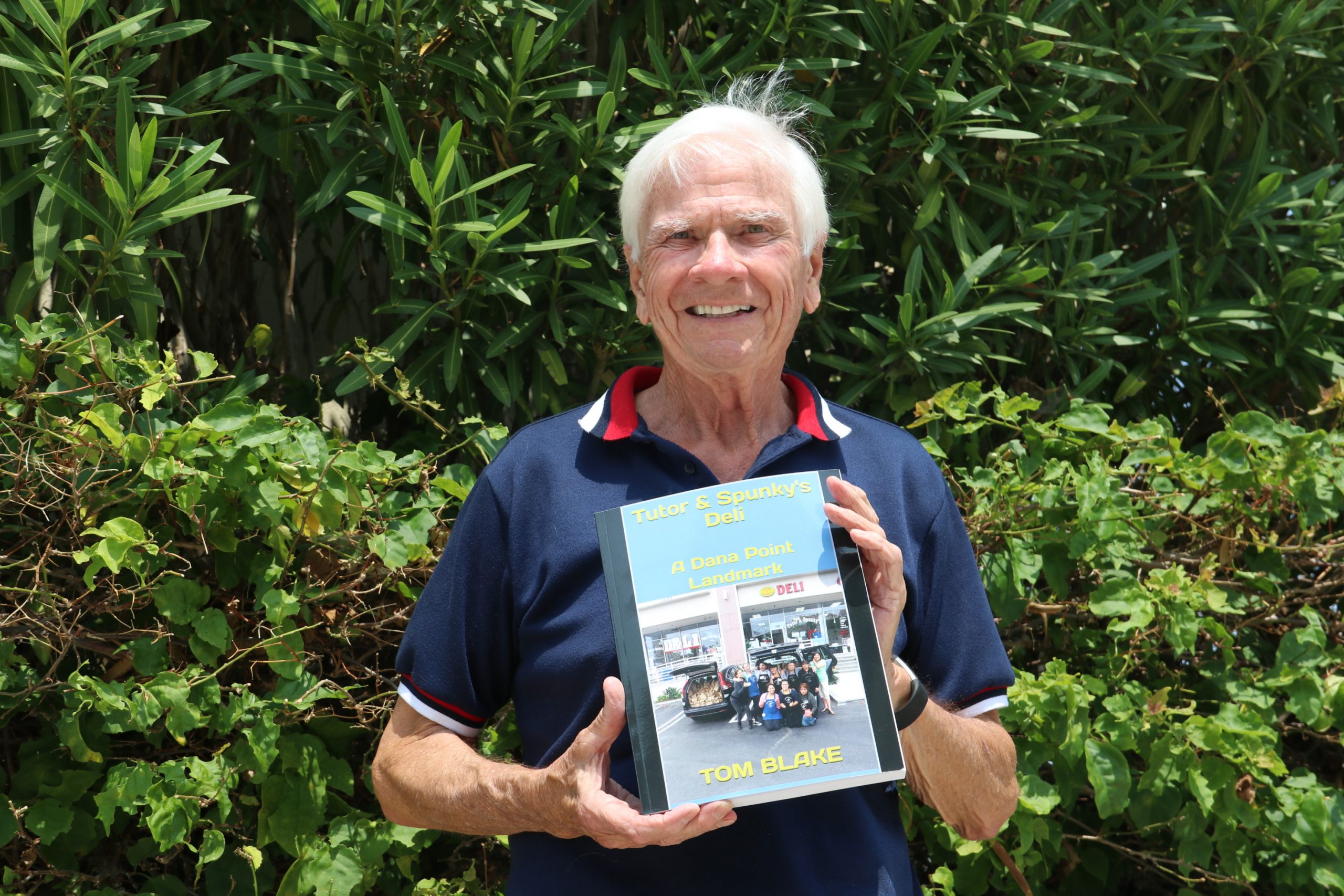 Sandwiches for the Soul: A Book on Tutor & Spunky’s Deli Highlights History of Business and Community

Editor’s Note: Tom Blake is a regular contributor for San Clemente Times. In his bi-monthly column, Life and Love After 50, Blake discusses dating, romance and love for seniors.

In 1988, Tom Blake says he gave up the headaches of the corporate world to make big sandwiches.

Blake had grown up in Jackson, Michigan before attending DePauw University in Indiana. He served in the U.S. Navy during the Vietnam War and then went on to earn his MBA. He began his career working in public relations for the airline industry. After several years, he headed to the West Coast and began working for Victoria Station, one of the fastest-growing companies in the United States in the 1970s.

“That’s where I got my exposure to the restaurant industry,” Blake said. “I worked there for eight years and really learned the ins and outs of that world.”

At its peak, there were 105 restaurant locations. Victoria Station eventually went bankrupt after the business had grown too fast, Blake said.

“(After Victoria Station), I really wanted to leave the corporate world,” said Blake, who moved to Dana Point in 1987 with his then-wife. “I knew enough about the restaurant business to be dangerous. But I wanted to create something that was my own.”

Blake saw that there was a vacancy at a storefront location in Dana Point.

“I got the lease in August and managed to open a deli by the year’s end with one employee,” Blake said.

He opened Tutor & Spunky’s Deli in 1988—named after the nicknames of Tom (Tutor) and his wife (Spunky). While Tom is no longer married to her, he decided to keep the name.

The following year, Dana Point became a city, and the deli grew as the city grew. For the next 26 years, Tom managed and guided the deli into a $1 million yearly sales business. During that time frame, he hired 186 employees.

On July 17, Blake published his book, Tutor & Spunky’s Deli: A Dana Point Landmark, which reflects back on the deli’s history and the shaping of Dana Point as a city.

The book describes the employees, customers and celebrities who visited. During that time, Blake also became a newspaper columnist.

In the wake of his divorce, Blake began writing about his experiences dating and searching for love again during the later chapters of his life. The columns were first published in the Orange County Register and later in The Capistrano Dispatch, Dana Point Times and San Clemente Times.

“One of the messages I’ve tried to convey in my columns and in this book is that with adversity comes opportunity,” Blake said. “You need to look for those opportunities, because they aren’t always evident.”

When a woman customer named Greta came into the deli in 1998 and ordered a freshly squeezed carrot juice, Blake says he noticed her while she waited for her juice to be prepared. He walked around the counter and said to her, “Would you like to have dinner with me?” Tom and Greta have been together ever since.

Tom and Greta were able to take some incredible trips to Europe, South America, and throughout the United States, and travel to New York City, where Tom appeared on NBC’s Today show and ABC’s Good Morning America, while his staff held down the fort.

The book delves into major events that affected the deli, including the Dana Point Post Office shooting, the fires that decimated Laguna Beach, the local bank heists, the yacht Ponzi scheme by a well-known customer and the murder of former Dana Point resident Nicole Brown Simpson.

Blake also addresses the disappearance and murders of his former son-in-law, Joey McStay, McStay’s wife and two children. McStay had worked at the deli when he was younger.

The McStay family murders occurred around February 2010, after the family disappeared from their home in Fallbrook, California; their bodies were found in the desert near Victorville on Nov. 13, 2013.

The book also highlights the implementation of a Dana Point Town Center plan that forced the deli to relocate and the never-ending issues, challenges, and rewards of dealing with employees.

“People who dream of someday owning a restaurant will benefit from reading the book,” Blake said. “There is risk and there are rewards of having one’s own business. It’s not a cakewalk, it’s no stroll in the park, and it needs to be a total dedication that can lead to success.”

And, although Blake retired and sold the deli in 2015, Tutor & Spunky’s remains in business in 2021. The deli is currently owned by two Vietnamese sisters, Samantha Nguyen and Elena Sik. They took over ownership in 2019 and have since maintained the original menu while adding, Vietnamese-inspired menu items.

Blake’s book is available on Amazon in paperback and on Kindle. The book adds up to 382 pages and contains more than 100 photos.