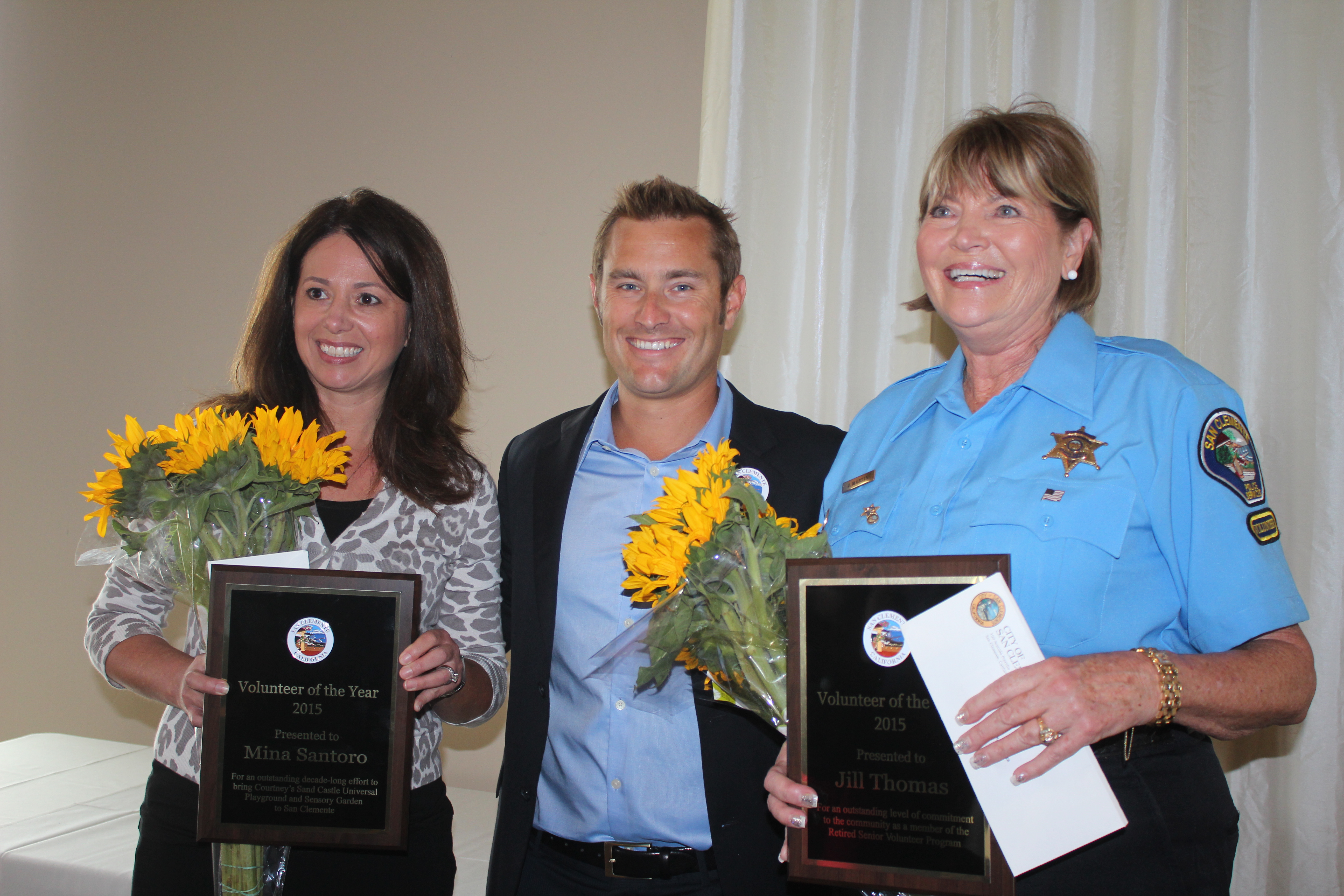 Santoro, Martin Honored as Volunteers of the Year

City recognizes efforts across the spectrum of giving

Martin and Santoro were honored May 7 at the city’s annual Volunteer Appreciation luncheon, where they were awarded the title of co-volunteers of the year.

Martin has been with the Retired Senior Volunteer Program of the Orange County Sheriff’s Department since 2006. She said she saw the effort as the way to repay the city for the way emergency services had treated her family in the past.

“My mother was ill, and she loved to call 9-1-1,” Martin said. “They would show up every time with a smile on their face, ask her ‘How’s everything,’ whether it was the fire department paramedics or whoever. I am so grateful to them, and this is my way of giving back to the city for how good they were to her.”

Martin now primarily works in the sheriff department substation in San Clemente, compiling statistics to be sent each month to the county. She also compiles minutes for the group’s monthly meetings, along with helping to answer phones.

“I love the group that I work with, and I thank the city. Thank you all,” Martin said upon receiving the award.

Santoro, who has headed the Courtney’s SandCastle Foundation since its founding, was completely surprised by the award, noting that she had been planning on taking her daughter to the orthodontist due to a broken bracket before deciding to come to the luncheon.

Courtney’s celebrated a major milestone this year, with the completion of the second phase of the universal access playground. Santoro helped to write grants for the park, solicited donations for the organization and hosted special events to come to the park, as well as reaching out to the special needs population of the county to bring more children to the park.

“I want to thank you all for honoring me, but I can’t take the credit because I couldn’t have done this without the support of this amazing community,” Santoro said. “It’s exciting to have worked on the project for 13 years and now finally seeing the kids playing. At the groundbreaking, I had tears in my eyes.”

Other nominees for the honor included Sally Silva of the Pet Project Foundation, who was nominated for her hours of volunteer work that included fundraising and dog walking, as well as leading several of the organization’s fundraisers. Kathy LaMonte of the San Clemente Friends of the Library was nominated for her work helping to coordinate bookstore volunteers, which included staying in close contact with the volunteers during the bookstore’s closure for the library expansion project and keeping them connected with various functions. Mary Lou Wakefield, also from the Friends of the Library, serves as membership chair of the group and has spearheaded a number of initiatives to increase the group’s membership, as well as well as leading a fundraising partnership with the San Clemente Art Association for a new tile program. Francine Desilets of the Neighborhood Watch program and John Dorey of the Friends of San Clemente Foundation were also honored with special recognition.