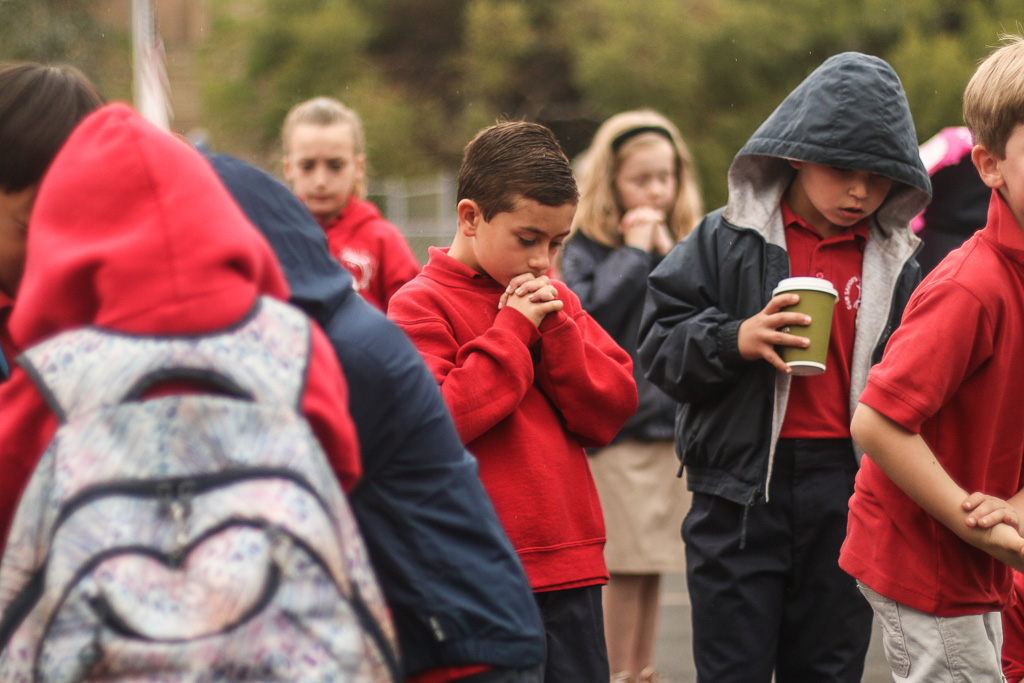 Our Savior’s Lutheran School will Suspend its Elementary School Next Year; Preschool, Kindergarten to Stay

A message that was signed by the Our Savior’s Lutheran Council and School Board on March 20 announced the school would not offer first- through fifth-grade classes next fall and will offer only preschool and kindergarten classes due to low enrollment.

The school board stated it gave families until March 19 to submit the school of which they’re dedicated to enroll in next year. The letter from the board stated the school needed at least 44 elementary school students to offer kindergarten, first- and second-grade combination classes and third- and fourth-grade classes. But by Monday, officials said it had only received 22 responses stating Our Savior’s Lutheran School (OSLS) was their school of choice.

A student prays during the beginning of the day on March 22 at Our Savior’s Lutheran School, which students and teachers do at the beginning of each school day. The school’s officials announced on March 20 that it would not provide first- through fifth-grade education next year due to dwindling enrollment and financial hardships. Photo: Eric Heinz

Pastor Jeff Frohner speaks with students during the morning session on March 22 at Our Savior's Lutheran Church. Photo: Eric Heinz

Cindy Baas has taught at Our Saviro's Lutheran School for more than 30 years. Teachers were given bouquets of flowers on March 22. Photo: Eric Heinz

Kitty Schmidt, the principal at Our Savior's Lutheran School, speaks to students during the morning session on March 22. Photo: Eric Heinz

“It is with great sadness that we announce that for the 2018-2019 school year we are suspending our first through fifth-grade elementary program due to low enrollment. Our preschool and kindergarten programs will continue,” the letter from the board stated.

It wasn’t long ago the school had at least 100 students, said Theresa Alvarez, a parent and member of the school’s parent-teacher foundation (PTF).

“I think it’s multifaceted. A lot of schools are declining (in enrollment) and we’re really working on getting families involved,” said Pastor Jeff Frohner, who leads the church congregation as well as the school.

Capistrano Unified School District (CUSD) has been going through its own pains of declining enrollment, but OSLS is a private school outside that jurisdiction or membership.

Tuition to the school is between $8,200 and $8,800, though Frohner said it costs about $10,000 to educate each student. The difference is made up through fundraisers.

Frohner said the school had been operating at a deficit for at least the last three years. In addition to the declining enrollment, the congregation is on the hook for a building with a $500,000 mortgage. Such capital improvements in public schools are typically bonded out or paid through by voter initiatives.

Some members of the PTF said there was as much as $800,000 to $1 million in reserves for the school as early as a few years ago, but that reserve was siphoned in order to pay the deficits of the school.

The school had consultants assist officials with finding alternatives to closure, such as non-paid scholarships that would fill classrooms and other methods, but as early as September, the parents of the school were notified of a potential closure, according to emails sent from OSLS.

Liz Hueg, the president of the PTF, said the parent organization covered the deficit for the school for the 2017-18 year after the school used reserves to pay off the mortgage for one of its buildings.

Additionally, the school pays a $70,000 fee to the church congregation to use the building each year, Hueg said.
The congregation and the school board are overseen under one entity but achieve budget goals separately, according to sources close to the situation.

The school is overseen by a board that is selected by either the pastor or the church congregation.

Members of the PTF contacted a bishop at the Evangelical Lutheran Church in America, but the faction said it could not intervene.

“Quite simply, successive years of low enrollment and operating budget deficits have reached a point where offering a full elementary school program was no longer viable,” said Linda Howard, a school board member, in an email. “We did feel that we could restructure and offer a modified program next year if we could reach a confirmed enrollment of 44 but, unfortunately, that did not happen.”

Cindy Baas has been at the school for more than 30 years and said she was crestfallen when she heard the news.

Baas said when she had cancer, families at the school had helped her with day-to-day activities. Without the school in place, she said she’ll have to find another place where she can help shape young minds.

OSLS will finish the remainder of the school year and then transition to just preschool and kindergarten in 2018-19. Pastor Frohner said the elementary school could return if enrollment commitment rose. As for the teachers, who will be let go, Frohner said the school would do “everything in its power to help them.”

“We’re going to go forward, rebuild and continue to serve San Clemente,” Frohner said. “We know there’s lots of grieving among the families, and we love them all. We respect them all.”

Editor’s note: The San Clemente Times attempted to examine the tax return documents that would have been submitted by most nonprofit organizations, but as the school operates under a church, it is not required to file 990 tax forms. A cursory search of the IRS website revealed no submissions from Our Savior’s Lutheran Church or school.