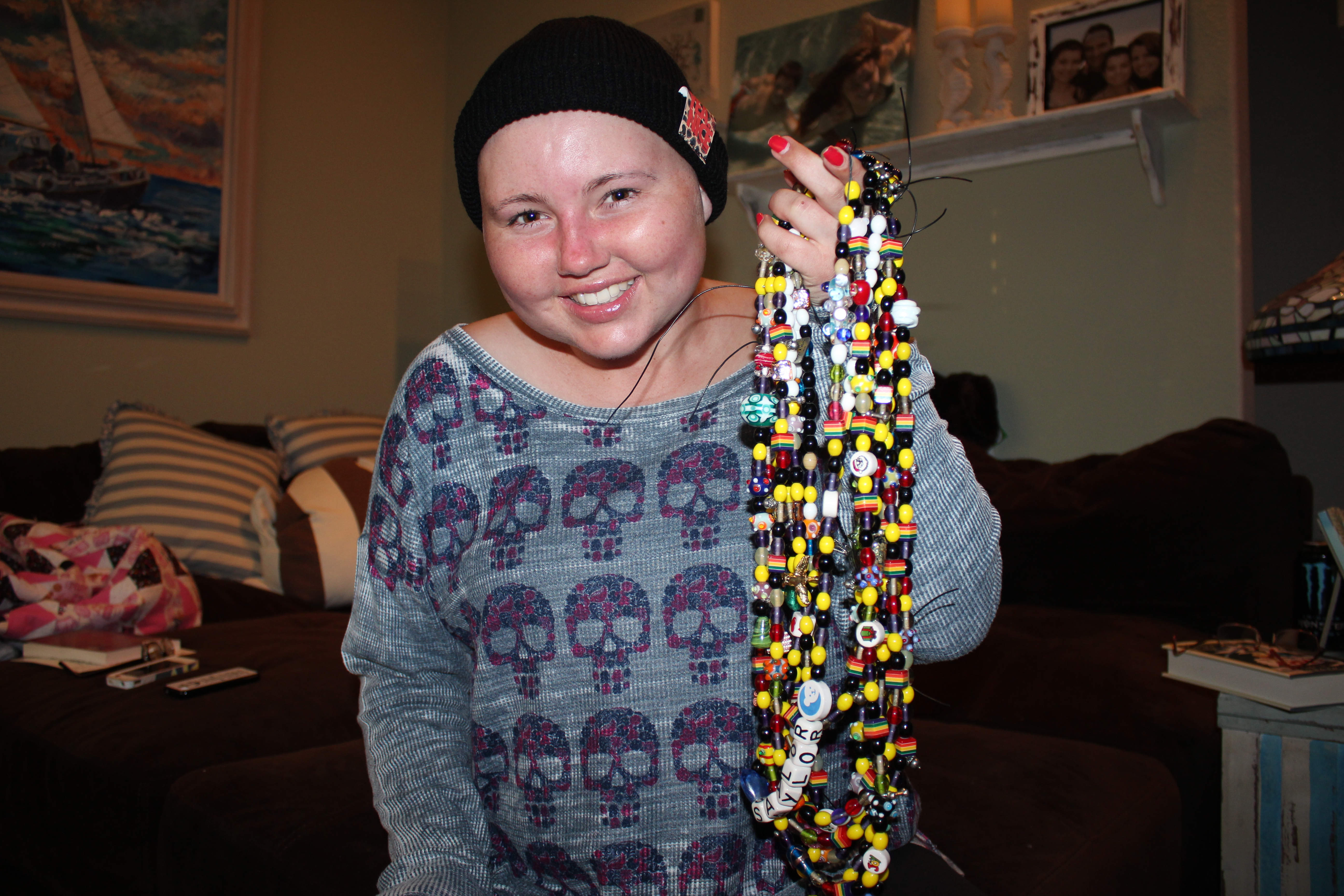 Saylor Voris thought nothing of the cold she’d caught the first week of school. As captain of the junior varsity cheer team at San Clemente High School, Voris powered through the cold to cheer at that week’s football game.

“I figured it was just the start of school, lots of germs and stuff,” she said.

That cold, however, turned into something that changed her and her family’s life.

Over the weekend, Voris felt worse. Her throat ached and a mark had suddenly appeared on her leg, which her family thought might be a bug bite. She went to urgent care, but the doctors didn’t examine her throat or the bite. She was given antibiotics.

Her mother, Konnie, said she slept alongside her daughter that night but the mark, and her symptoms, were getting worse. On Monday, Sept. 16, Saylor’s father John brought her to Saddleback Memorial Medical Center in San Clemente. After a culture was taken, Saylor and Konnie were sent to Mission Hospital, where more tests were done.

“At Mission, they told me she had leukemia,” Konnie said.

Saylor was taken for her second ambulance trip of the day to Children’s Hospital of Orange County.

“I had all my stuff ready for school. We were going to the ER and I figured they’d draw blood. I had all my school clothes and books,” Saylor said.

Saylor said the next day was when the diagnosis really set in.

“I was in shock,” she said. “I’d never spent a night in the hospital before. I’d broken my arm when I was little, but other than that… I woke up and really didn’t know where I was. I asked ‘Is this real?’”

Konnie said she and her husband John felt the same way.

“It felt like it was a nightmare and we couldn’t wake up,” Konnie said. “Every night we’d stay there, we would wake up and say ‘It’s not real,’ and every day, there we are and it is real.”

Konnie said it was hard knowing that their son, Sam, was at home, often alone. Konnie and John were essentially living at the hospital, trading 48-hour shifts. While Sam would also visit his sister, there were points, like after her transplant, when her quarantine would not allow it.

Saylor endured several rounds of chemotherapy and other treatment lasting 40 days, before she could go home for two or three days. Then it would be back to the hospital for treatment.

Much of the time she didn’t spend being treated, she was essentially quarantined, due to the effect the treatment had on her immune system. Konnie said she could get violently sick, have mouth sores that made it difficult to eat or have her feet swell to the point it was difficult to walk.

“It seemed that any side effect, the rarest, she got,” Konnie said.

Saylor has 10 strings of beads that provide her with a physical remembrance of her story. Each bead marks a significant event, whether it be a night or holiday spent at the hospital, a day of chemotherapy treatment, or an injection. During the height of her treatment, “the bead lady” was the only one who might be able to visit her.

“The prettier the bead, the worse the thing is,” Saylor said.

The treatment itself, however, is not enough to save Saylor. Due to genetic mutation, the type of cancer she has required a bone marrow transplant to fight off. After her fourth round of chemotherapy, a donor was found. She does not know the identity of the donor, a 22-year-old woman who donated adult stem cells. The donor has already sent a gift, but won’t be able to reveal her identity until Feb. 14, 2015.

Saylor came home for good on March 17, St. Patrick’s Day. But a return to school, and a return to something resembling the old normal, will have to wait for several more months. Saylor is about half-way through a 100 day quarantine necessitated by the transplant. She’ll be on a restricted diet until then. It won’t be until 80 days later that she can again be around large groups of people. Her 180 day period ends Aug. 14, which happens to be her mother’s birthday.

She still visits a clinic twice a week to check her heart and liver, as well as looking for signs her body might be rejecting the bone marrow graft. She still takes 60 pills a day to help combat that and other effects of the cancer, and she still has two lines in her body that must be cleaned regularly.

“The big risk is that if that doesn’t take, we’d have to undergo a different transplant of some sort,” John said.

That does entail sacrifice. The Vorises can’t have people over or go out to restaurants as a family. Administering Saylor’s pills, Konnie says, is itself stressful.

“I’m always second guessing myself. I know I did it right,” Konnie said. “But in the beginning I’d go into her room in the middle of the night just to be sure she’s breathing.”

In addition to the emotional and physical toll of the treatment, Saylor and Konnie said there’s also the constant reminders of what she’s missing out on. Saylor’s social media is flooded with reminders of friends’ 16th birthday parties and learning to drive, which she can’t be a part of. That’s in addition to the formal events lost, the dances missed and losing out on cheering at the Homecoming game. Her picture for the yearbook was taken at CHOC, before her chemotherapy treatments robbed her of her hair.

The Vorises say they’ve received tremendous support from their neighbors, the SCHS community and the city at large. John’s colleagues at the city of Orange Fire Department got their heads shaved to support all of the children in the oncology wing at CHOC. Neighbors have mowed their lawn, cooked meals and checked in on Sam while they’ve been away. Saylor also got to watch SCHS football games online and was able to Skype into the cheer team’s banquet during her treatment.

The family is also encouraging residents to help others the way Saylor was helped. Over 1,000 people have already been added to the bone marrow registry as a result of Saylor’s fight, with a goal of signing up the entire city in mind.

“Hopefully somebody actually gives in Saylor’s name because that will make it worth it for all of us,” John said. “We knew they probably wouldn’t be a match but it might save another kid.”

Saylor said there are a couple of additional milestones she’s looking forward to. Her family has been involved for years in San Clemente’s Relay for Life, but will, for the first time, be seeing it from the side of the survivors. Saylor has her own team, “Saylor’s Soldiers,” to raise money for the American Cancer Society. She’s hoping to be well enough to make an appearance at the event, which will be held July 26 and 27, in order to share her story.

She’s also looking forward to returning to school. A teacher at CHOC has allowed her to keep up with her courses. She’s wanted, desperately, to go back to school since the start of her treatment.

“I’m going to go back junior year and start it all fresh and have a great year. And do everything that I didn’t get to do,” she said.  That includes a return to cheer, as well.

“I’m really looking forward to that, I love cheer,” Voris said. “That’s my sport, it’s what I love to do. It’s what I do every day. It’s my own little family that I have.”

Her treatment has also given her a new goal. Saylor said she now wants to go into nursing, inspired by the example of the nurses who’d helped her through her treatment.

Adoptable Pet of the Week: Belle