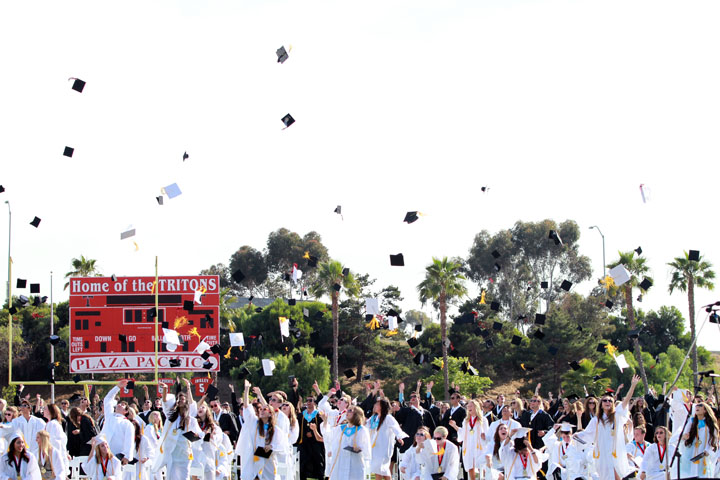 Class of 2013 Answers Challenges at SCHS

As San Clemente High School’s class of 2013 walked across the field to receive their diplomas, the skies, which had been overcast throughout the afternoon suddenly opened up, and the sun shone down, just as the parents and loved ones of the soon-to-be-graduates might have hoped.

In one of his final acts as principal at San Clemente High School, George Duarte told his assembled charges, their families, friends and well-wishers about a talk he gave the same group almost four years earlier.

Duarte said he challenged the class of 2013 at their freshman orientation in 2009 to become the most academically successful in the history of the school and to set new standards throughout the campus.

That challenge, Duarte said, had not only been undertaken, but also met, and even surpassed. The Class of 2013, he said, helped to set new standards, in terms of Advanced Placement, International Baccalaureate and nearly all other measurements at the school. The class earned the highest Academic Performance index score in the school’s history, and garnered more than $1.8 million in funds from colleges and universities.

In addition to academic performance, the class achieved high marks on the field, including a number of CIF championships and league titles, and on the stage, with dance and singing titles, sold out musicals and plays.

But after the formalities were completed, after the tassels were turned and caps thrown about the Thalassa Stadium ground, it was the camaraderie that showed what the class of 2013 is really about. It was in the way students rushed to hug one another, both in genuine excitement over their shared accomplishment and their excitement about what is ahead.

The future of the class of 2013 is yet to be written. But they couldn’t have hoped for a better start.