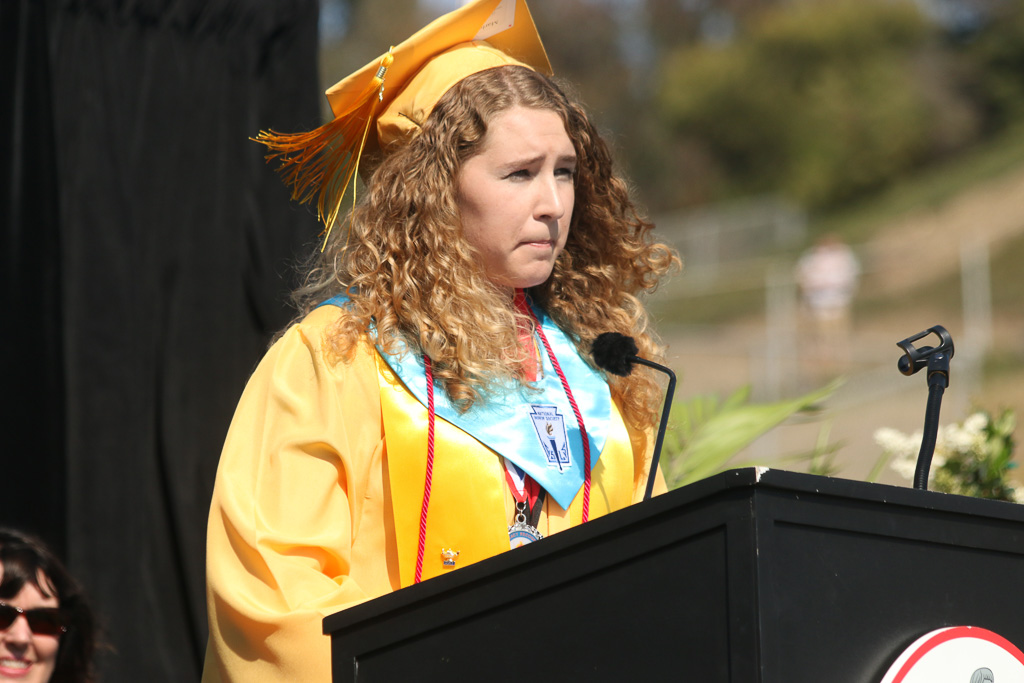 Scholar of Scholars Graduation Speech: “To Live a Fool and Die a Sage”

Eight simple words that took me exactly 723 days, 15 hours, 17 minutes and 23 seconds to understand. It is a phrase that can explain the entirety of a high school experience. To understand why, first take a look to your left. Now, take a look to your right. Those sitting next to you are fools. Take a look in front of you, behind you, then take a look at the girl in the mustard-yellow robe on the stage. They, like the people beside you, are fools.

But what is a fool? The fool, according to the most valid of sources (the internet), is the archetype that urges us to enjoy the process of our lives and is arguably the wisest archetype of all for managing to turn work into fun. The sage is the archetype that seeks truth after journeys. And the line between the two is blurry, if it exists at all. And for that, calling you fools is the same as calling you all brilliant.

Now that you know this, you have instantaneously become a sage , a wise man or woman akin to Confucius, Einstein, or Ms. Washington. This is because for the past four years you have lived each and every day believing you knew more or less what would happen the next day. You knew that test would be hard, you knew they would coat the freshman hill in soap or oil, you knew your friends would all only show up with dessert if you decided to have potluck. Every day was a constant anticipation of what’s next, and the biggest foolishness of all was about what we are going to do with our lives.

Had you asked the slightly less-tall, blonde, curly-haired band kid, who only barely knew that rolly backpacks weren’t socially acceptable and who showed up to San Clemente High School four years ago and asked her what she was going to do with her life, she would have naïvely told you she was going to be a theoretical mathematical physical nuclear chemist going to Caltech. Now I realize not only do I have no idea what such a position even is, but I would also come to realize that I didn’t, and still to this day do not, know what I will do with my life.

And that scares me, scaring me almost to the point where I am willing to simply walk away and twirl signs on a street corner for the rest of my life to earn a living, throwing away all that I’ve worked for, all the time I’ve spent, and all the money I’ve poured into College Board.

But for this I have become a sage. I know that I don’t know what will happen tomorrow . And neither do you. Nine months ago, many of us would have said we would consider going to this school or that, and now we are just happy to have made it into one school. But here’s the key: whether you are going to UCLA or Mizzou, Coast Guard or Purdue, you don’t know what tomorrow holds. You could even be going to somewhere like Yale and still have no idea whether tomorrow promises a Nobel Prize or a nice pink slip.

In being able to acknowledge the foolishness, one becomes a sage. Revel in the present, for that is all that one can control. In the words of the great Master Oogway from Kung Fu Panda, “Yesterday is history, tomorrow is a mystery, but now is a gift. That is why it is called the present.” Knowing that you don’t know what tomorrow holds only makes tomorrow’s surprises more sweet.

Now that I’ve said all this, it may seem that the past four years were utter foolishness. And that is true. Every year, I was told that year was going to be the hardest and that the next would be easier. That was never true. But there is beauty in this foolishness, a kind apart from ignorant bliss. Because fools make friends. Fools go out and have fun. Fools do completely ridiculous things like drive 15 minutes just to get Chick-fil-A or go watch terrible movies because you know everyone is going to talk during the movie anyway. Foolishness is doing all that you can today because you think you won’t be able to tomorrow. Thinking about what tomorrow holds pushes us to do all we can in the present.

So while I’ve basically told you all that being a sage means growing up, take a look at the thousands of people I’ve neglected to address thus far. They are a bunch of fools who probably think that today is that day their students enter a new era. They think that today marks a complete change in our lives. They think that if they hurry, they can make it out of the parking lot in less than 15 minutes. Fools! Take a look at the beauty of the foolish, how they believe that we all we go on to become the Oprah Winfrey, the Barack Obama, the Mr. or Ms. Kerr of tomorrow, and they believe this so much that they are willing to be crammed with thousands of random strangers and endure a two-hour ceremony and a speech from some random girl who they hope will shut up soon, all the while sitting in the blazing heat. I say that is beautiful, and if being a sage means I lose out on all the foolishness of the world, then I’d rather be a fool. So stay foolish!

And while I may stand before you looking like a fool in a yellow robe, I want you all to know that if I could, I would recreate the scene from Mean Girls where she breaks the Prom Queen crown and shares it with the other deserving people, because behind every one person in a yellow robe are hundreds of equally if not more deserving fools to wear the yellow robe, people like William Hirsh, Katina Gabriel, Zoe Day, Grace Krantz, Erika Hunting, and Ben Giacobello. There are also fools out there who, hidden behind white, black, and red robes, are wearing Golden robes for wit, humor, irony, and kindness, people like Lily Maranto, Morgan Thomas, Chloe Waugh, Amy Schultz, Emma Patterson, Matt DeKoeyer , Kelli Beach, and Natalie Zanzonico. And even in the audience, there are fools wearing hidden golden robes for all that they’ve done; fools like my parents and my lovable idiot of a brother, Matthew. And so before I conclude, I want to thank all those fools out there wearing hidden golden robes for all that you’ve helped me, the school, and the world.

Now back to the fools sitting in front of me. While your high school days, to put it somewhat morbidly, are dying and you look back on your precious follies, you have become a sage of your high school career. However, you have only become a sage to learn to be a fool in the future. Thus after 723 days, 15 hours, 17 minutes and 23 seconds, I have come to understand that the saying “To live a fool and die a sage” is somewhat outdated. I find there is a phrase that is much closer to heart: “To live a fool and to never stop being one.”