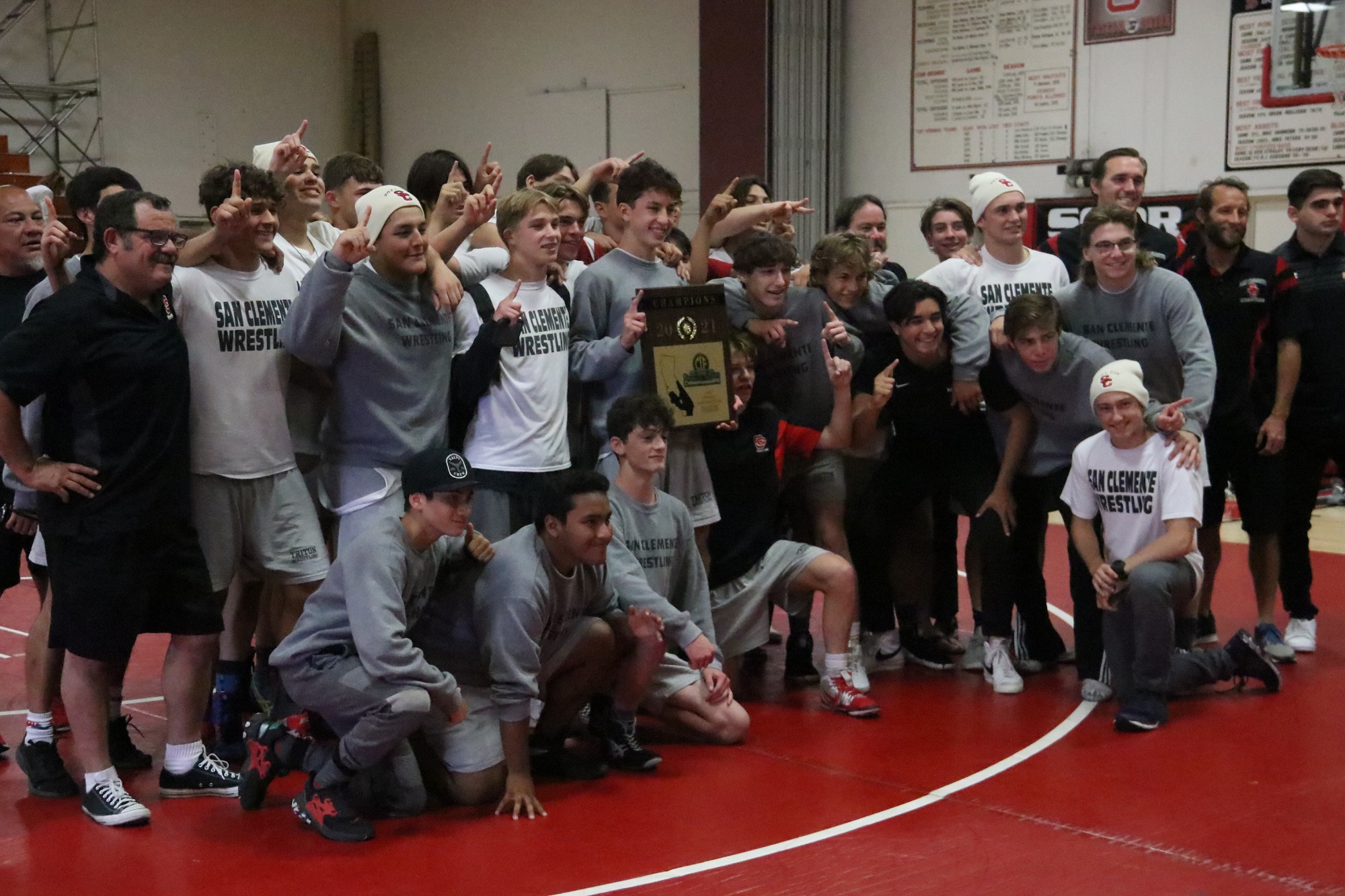 Last season may have been San Clemente boys wrestling’s first CIF-SS dual meet championship, but the road to the second title will be one long remembered.

Top-seeded San Clemente secured eight pins on their way to a strong win over No. 2 seed Royal, 52-21, to capture its second straight CIF-SS dual meet championship in the Division 3 final on Saturday, June 5 at San Clemente High School.

As a high-contact, close-quarters sport, wrestling was abnormally affected by the pandemic restrictions. The start of the season was pushed from the winter until the spring, and when teams were finally allowed to wrestle, some had to take matches outside, and all individual tournaments were canceled, including the CIF-SS championships.

Through it all, San Clemente stuck together and climbed to the mountaintop.

“We had limited opportunities to compete, so we made the most of it,” San Clemente coach Mark Calentino said. “Tried to be wrestling two duals a week. Stepped in front of the toughest competition we could. There was nothing that they’ve done this year that would make me question the fact that they were ready to fight and ready to wrestle to the end. I’m very proud of these guys.”

“You can win a tournament championship with eight or nine guys,” Calentino said, “but if you don’t show up with 12 to 14 good wrestlers, you’re not going to win a dual meet championship.”

Now in 2021, San Clemente was the No. 1 seed, and the Tritons welcomed in No. 2 seed Royal to their own gym to capture the CIF-SS championship in style.

San Clemente won its first three matches with Dominic Morales getting a pin at 142 pounds, Jake Lerdahl earning a major decision at 149 pounds and Garrett Boyd outlasting his opponent at 156 pounds for a decision win, 9-7.

“Second match (was the turning point),” Calentino said. “That was a CIF runner-up for them. That was one of their best guys. When (Lerdahl) won that match, I had no doubt in my mind we were going to roll on them.”

San Clemente led 13-0 at that point, but Royal got on the board with a decision win at 164 pounds.

Then the Tritons hit the gas with four straight pins by Hunter Nielsen at 174 pounds, Cole Roberston at 186 pounds, Robert Maley at 199 pounds and Fernando Llanos at 224 pounds. Maley’s pin came 16 seconds into his match.

After a forfeit at heavyweight, San Clemente had a 37-9 lead with five matches to go, but by then, Calentino knew the Tritons had the title locked up.

Andrew Fucci got another pin for San Clemente at 117 pounds, and Frederick earned a decision at 124 pounds. Benjamin Wimberly got one last pin at 130 pounds to round out San Clemente’s victory.

Calentino wishes there was still a CIF-SS individual tournament to look forward to, but for now, he and the Tritons can look back at the road traveled with another gold championship plaque in hand.