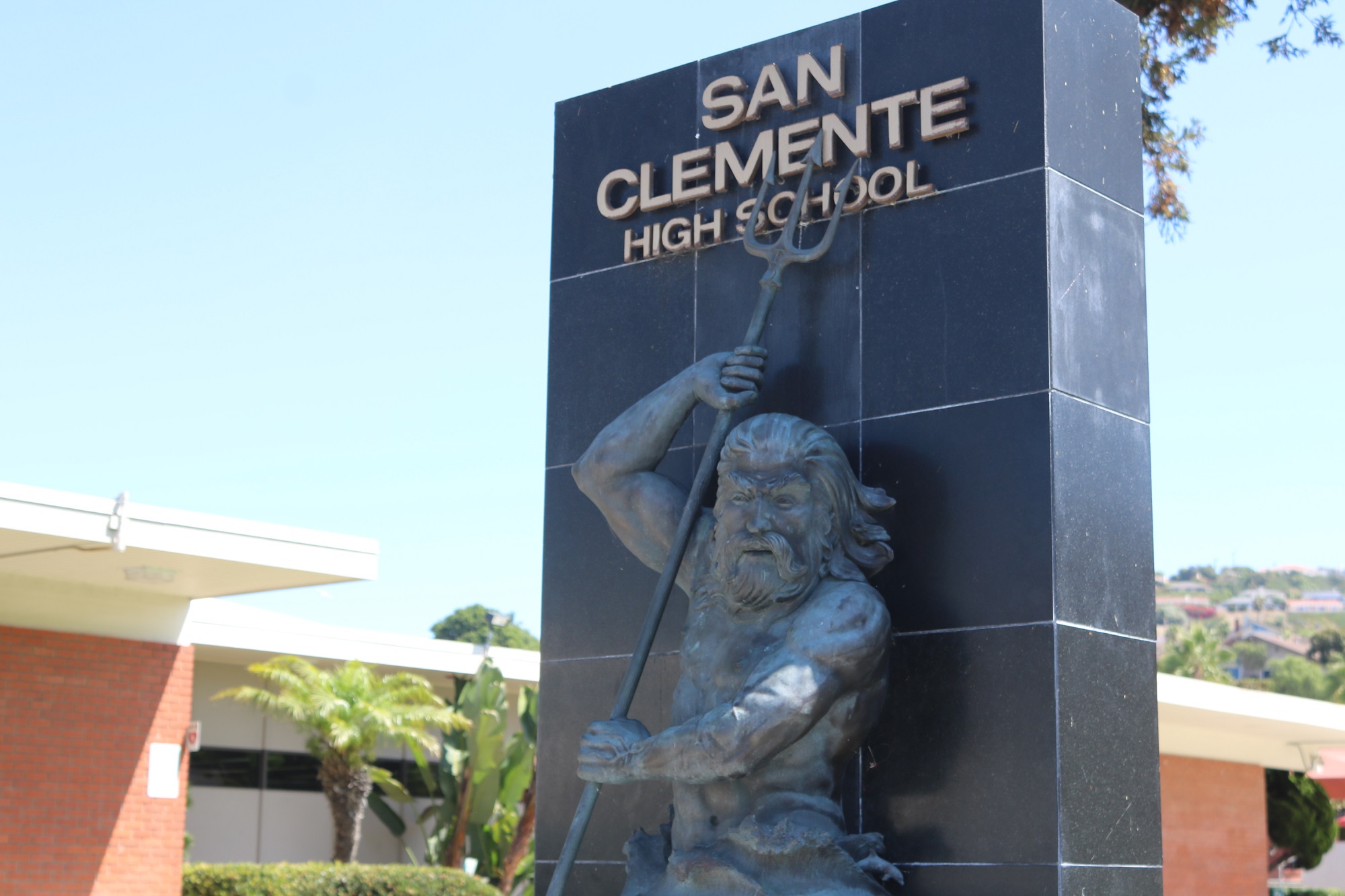 A San Clemente High School investigation confirmed that a “racial epithet” was said to a student from Lincoln High School and that “derogatory words were heard” in the San Clemente stands during a football game at home on Sept. 13.

San Clemente Principal Chris Carter released the findings of the investigation in a letter to the Lincoln and San Clemente communities sent out on Friday night.

“Based on our extensive investigation, we were able to confirm that two individuals in the restroom used a racial epithet when addressing a Lincoln High School student,” the letter said. “In addition, statements we collected confirmed that derogatory words were heard in our bleachers.”

The specific individuals were unable to be identified.

“While we were able to corroborate some details, we could not confirm the identity of students through the investigation,” Capistrano Unified School District spokesperson Ryan Burris said.

“As the Principal of San Clemente High School,” Carter said in the letter, “I, along with my administrative team, deeply regret the pain to both the individual students affected and the Lincoln High School community as a whole and extend our sincerest apologies.”

As part of San Clemente’s investigation this week, the school collected statements from Lincoln and San Clemente students, parents and personnel, as well as the Orange County Sheriff’s Department and the private security team used for football games. San Clemente also reviewed eight hours of video from Sept. 13 captured from multiple cameras around the stadium.

In the letter, Carter said the school collaborated with Lincoln principal Stephanie Brown to review statements from the Lincoln community.

“It is evident from those testimonials,” the letter said, “that the Lincoln High School students and fans felt unwelcome on our campus.”

Brown released a letter on Friday night to the Lincoln community announcing the Lincoln High School investigation had concluded. The full report was expected to be released early this week, but as of Wednesday morning, Sept. 25, it had not been made public.

CUSD will not disclose further details on its report.

In each of their letters, both prinicipals spoke optimistically of their future plans to educate students on issues of hate and bring the communities together.

“I believe (Carter) shares our hopes for a future,” Brown said in her letter, “where students from different communities can celebrate their diversity without the fear of abuse. We have agreed to use this painful experience as an opportunity for growth for both of our student populations.”

San Clemente and Lincoln will be represented by 15 students and two adults from each school in a Restorative Cirlce and a one-day workshop with the Anti-Defamation League to “address bias, bullying and allyship.”

“While we strive to be a diverse and welcoming school community,” Carter said in his letter, “our own students have told us that we have work to do. With their leadership, we will use the opportunity to listen, explore, reflect and act within our school community to ensure that our words and actions are inclusive and supportive of every race, religion, sexual orientation, gender and ability.”

Carter’s letter continued to say that the school will do “ongoing work” with the Anti-Defamation League to educate students and staff on the history and reality of racism and prejudice in the United States.

“Our goal is that our school is a welcoming and inclusive place for every single person who walks on our campus, whether they be a student or a visitor,” Carter said.

Below is the full letter by San Clemente principal Chris Carter:

As a school and as a district, we do not tolerate racist or hateful rhetoric and actions that target and group or person. While we strive to be a diverse and welcoming school community, our own students have told us that we have work to do. With their leadership, we will use the opportunity to listen, explore, reflect and act within our school community to ensure that our words and actions are inclusive and supportive of every race, religion, sexual orientation, gender and ability.

Students from San Clemente and Lincoln will participate in a Restorative Circle and a one-day workshop facilitated by the Anti-Defamation League to address bias, bullying and allyship. The goal of this joint collaboration is to engage in conversations about how to lead and respond to bias. Additionally, San Clemente High School will be doing ongoing work with the Anti-Defamation League to provide meaningful and comprehensive resources, trainings and support to address implicit bias and hate speech. We will incorporate lessons that help educate students and staff on the history and current reality of prejudice and racism in our country. Our goal is that our school is a welcoming and inclusive place for every single person who walks on our campus, whether they be a student or a visitor.

As we move forward together in partnership with Principal Brown, I am hopeful that our community will use this opportunity to learn and grow.

Our investigation into the incidents of last Friday’s football game with San Clemente is now complete. I have spoken with dozens of students, parents, and staff members to get the facts, and I am writing now to share the information with you. Before anyone talks about moving forward, I think it is important to speak the truth about the type of racism our students faced at what was supposed to be an opportunity for enjoyment and friendly competition.

The most important finding from my investigation is that our students behaved themselves with the dignity and self-control we expect from them. I could not be prouder of their restraint in the face of open racist abuse. Among the difficulties our students faced in San Clemente were the following:

Our students were subjected to anti-African American, anti-LatinX and anti-gay verbal abuse.
African-American students in particular were told to go back to Africa.
Lincoln students were harassed as they tried to buy refreshments and use the restrooms.
Security guards and staff for the home team ignored repeated requests for assistance.
I plan to post a complete copy of our findings on our school website early next week, so everyone will have an opportunity to read the investigation for themselves.

Even as we carried out our investigation, we have worked hard to provide students with the supports they need to heal. We asked for additional resources from the district to offer our students crisis counseling. We made sure students were able to access the social and emotional care they needed to begin processing this experience. Next week, our entire teaching staff will receive training in bringing communities together following an incident of hate.

Our students are fortunate to attend a community of schools where diversity is highly valued. San Diego Unified and Lincoln High School Teachers have been leaders in the field of Ethnic Studies. Superintendent Cindy Marten and Board President Sharon Whitehurst-Payne have been very supportive to our school community in the aftermath of this unfortunate event. In the last week, I have watched them not only talk the talk, I have have seen them walk the walk, as they have given our students every level of support we have requested.

In directing our response to San Clemente, I have tried to act in a way that is consistent with my core beliefs about hatred and love, about opportunity and justice. This year marks the 400th anniversary of the arrival of the first enslaved Africans in what would become our country; racial hostility and injustice is as old as the nation itself. I believe the only way to undo racism is to consistently identify and describe it – and then dismantle it. That is how I believe we should move forward together.

We are called on to work with good people who want to do better for themselves and their communities. Immediately following the incident last weekend, I reached out to the principal at San Clemente, Principal Carter. I believe he shares our hopes for a future where students from different communities can celebrate their diversity without the fear of abuse. We have agreed to use this painful experience as an opportunity for growth for both of our student populations.

Soon, 15 students from Lincoln High School, along with two adults, will join with 15 students and two adults from San Clemente to begin building a relationship based on respect and understanding. They will receive training in tolerance and how to confront bias and bullying. We will challenge San Clemente to become a “No Place for Hate” school with an ongoing focus on anti-bias education.

Thank you for your kindness and support for our students over the past week. I also appreciate everyone who took time to find out more about my core beliefs as your still relatively new principal. My promise to everyone going forward is that we will always meet our challenges openly, honestly and collectively. We are stronger when we stand together for the kind of future our students deserve.

I hope you and your family have a peaceful weekend.