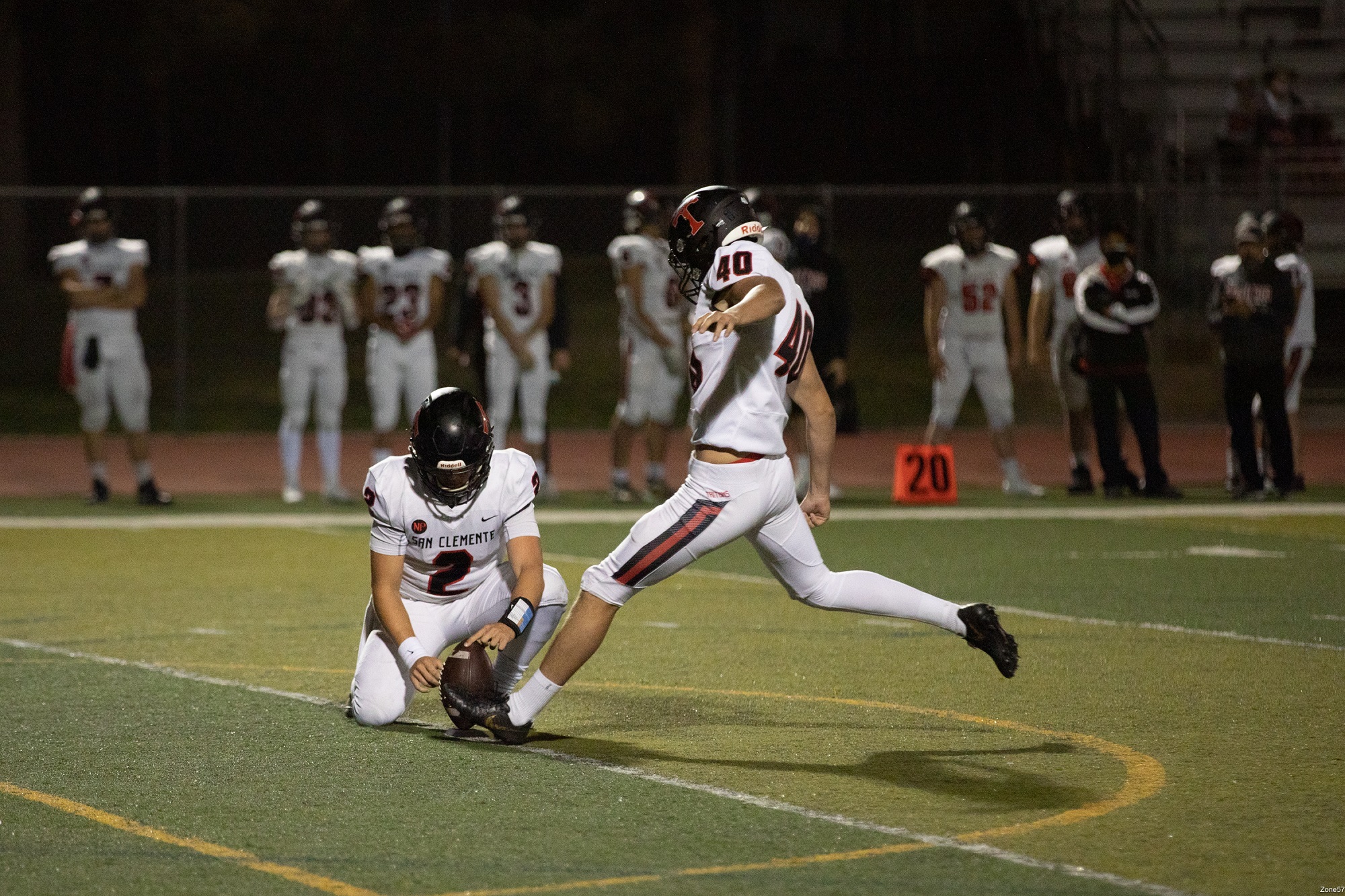 A season that was once threatened to not happen at all ended in perfect fashion for the San Clemente football team on Friday, April 16.

On the game’s final play, junior kicker Sean Harry knocked through a 25-yard field goal to push San Clemente over Mission Viejo, 10-7, to win its second South Coast League title in three seasons and finish its shortened and twice-delayed pandemic season unbeaten at 5-0.

Beyond just the perfect record on the field, it was the perfect result to bring relief after 16 months of hardship for the Triton program. After the game, players once again paid tribute to late San Clemente running backs coach Joe Wood, who died in February after a fight with COVID-19, and took note of the bounce-back season this was following last season’s removal from the CIF-SS playoffs and retroactive 0-12 record due to an ineligible player.

There will be no playoffs to put a further stamp on this season, but the finale made sure it would be a season long remembered.

Like the South Coast League championship, Friday was San Clemente’s second win over Mission Viejo (4-1, 2-1) in three seasons, with the win and title two seasons ago being the first for the Tritons since 1999. Both wins will go down in San Clemente lore as among the more dramatic results in program history.

In 2018, San Clemente pulled off a one-point win over Mission Viejo as the Tritons were led by their back-up quarterback off the bench and held on with a two-point conversion stop in the final minutes.

On Friday, it was a white-knuckled affair throughout down to Harry’s buzzer-beating kick.

San Clemente’s defense showed up to hold down the high-powered Diablos offense. The Tritons combined for eight sacks on the night. Senior Kanious Vaughn was credited with 2½ sacks, and junior Cole Robertson recorded two sacks. Seniors Keegan Even, Bentley Redden, Ryland Swarthout and Noa Serpa all collected at least one sack.

Mission Viejo squeezed out its only points of the game in the final minute of the first half.

Diablos quarterback Kadin Semonza hurled a deep pass that San Clemente had well defended, but the ball deflected to an open Mission Viejo receiver for the 40-yard TD and a 7-0 lead.

The Tritons’ defense, with some help from the Diablos’ special teams, set up San Clemente’s lone touchdown in the third quarter.

San Clemente held Mission Viejo at its own 35-yard line to force a punt late in the third quarter, and the ensuing snap went over the punter’s head. Ryan Goddard tackled the punter, and set San Clemente up at the Diablos’ 34-yard line. Senior running back James Bohls capitalized two plays later on a 22-yard touchdown run to tie the game, 7-7.

Bohls recorded his fourth 100-yard rushing game of the season, as well as his third consecutive game of at least 130 yards on the ground. The Arizona-bound senior ran for 132 yards on 23 carries. Bohls ran for 655 yards and 11 touchdowns on 77 carries in five games, an average of 131 yards a game.

Bohls got the Tritons deep into Mission Viejo territory with a 40-yard run, and San Clemente eventually set up inside the Diablos’ 10-yard line in the final seconds.

Harry’s kick went up and through as time expired to crown the Tritons as South Coast League champions.

The road back to the top was a long one for the Tritons, and for every team in California.

There was no spring football for San Clemente, as all athletic activities shut down in mid-March due to the coronavirus pandemic. Summer camps were planned to start on July 6, but amended state guidance postponed that first scheduled return.

After the start of the season received its first official delay from CIF-SS’ schedule announcement on July 20, San Clemente finally returned to the field for limited conditioning workouts on Aug. 25. Those workouts continued and slowly expanded their parameters over the next several months, but the season was officially delayed a second time with a CIF update in December.

The pandemic finally hit home for the Tritons on Feb. 12, when running backs coach Joe Wood died after a month-long battle with COVID-19. One week later on Feb. 19, the state amended its guidance to allow outdoor sports to return, and San Clemente got back on the field for a full football practice two weeks later.

Then, 16 months since their last competitive game, the San Clemente football team finally went back out under the lights on Friday night, March 19, and began its march to a perfect 5-0 campaign.

Playing the season at all was a win, and San Clemente made the most of its opportunity.