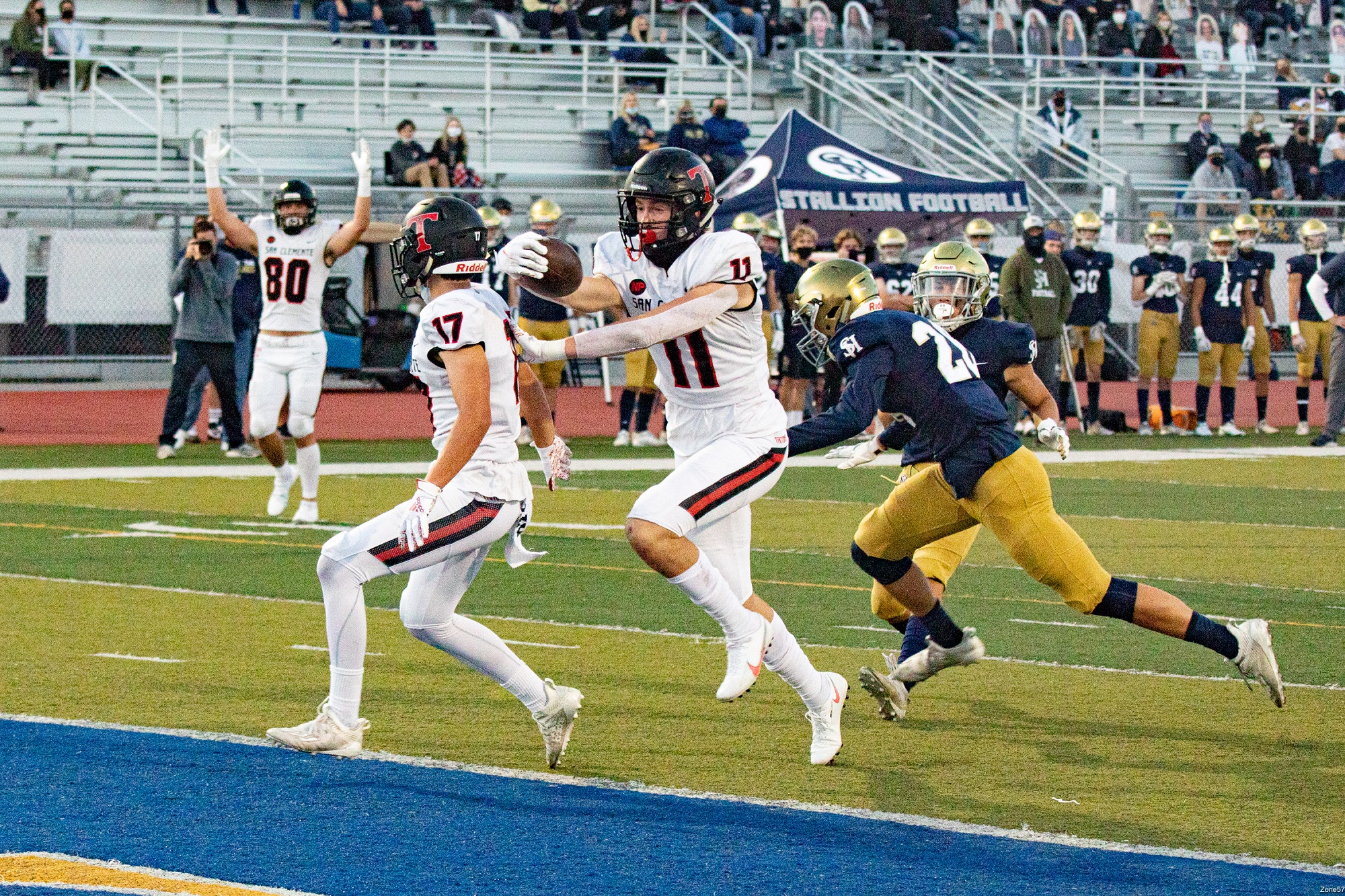 It’s the game both sides always have circled.

And in this season, which was delayed twice by the coronavirus pandemic and pushed from last August to this March, then opened with lists of restrictions and COVID-19 testing, this year’s edition between the two 4-0 teams is more special than ever.

“I kind of joked that every game this season is a gift,” San Clemente coach Jaime Ortiz said, “and that this Friday, both teams get Christmas.”

San Clemente hosts Mission Viejo on Friday, April 16, and it will be the first game for the Diablos at Thalassa Stadium since the Tritons pulled off their historic upset in 2018. That win was the first for San Clemente over Mission Viejo since 1999 and loosened the Diablos’ vise-like grip on the South Coast League.

Friday’s game will be broadcast on Fox Sports Prep Zone, with kickoff at 7 p.m. You can find Prep Zone on the Fox Sports Go app or by going to foxsports.com/west/prep-zone-stream.

Mission Viejo reclaimed the title last season, but since Chad Johnson’s hiring as Mission Viejo’s head coach prior to the 2018 season and San Clemente beating Mission Viejo in Johnson’s first entry into this series, the rivalry has only grown between the two South Orange County public school powers.

“I think it’s a great rivalry,” Ortiz said. “Iron sharpens iron. They make us better, and we make them better. At the end of the day, someone is going to win, and someone is going to lose. It’s two of the great public school programs in Orange County that are always highly ranked in the county. It’s a great matchup.”

Both programs have been impressive in this unprecedented season, and both have particularly been strong in their first two league games over San Juan Hills and Tesoro.

San Clemente has continued to be powered by an exclamation mark senior season by running back James Bohls. The Arizona-bound ball carrier has put his speed and size on display, with a combined 328 yards and six touchdowns on 37 carries in two South Coast League games.

“A lot of times in that senior year, things just click,” Ortiz said. “And for him, he’s always been such a big, strong athlete. He’s owned the running back position after working hard in the offseason. He’s learned his reads and knows his cuts much better.”

Bohls opened league with a career-high 177 yards and matched career highs in touchdowns (three) and carries (16) in a 35-7 win at San Juan Hills. Bohls then followed up with 151 yards and another three-touchdown night that set a new career high with 21 carries in a 35-17 win at Tesoro.

San Clemente has scored 35 points in three of its four games this season and put up 41 points against Aliso Niguel. After allowing 24 points to Capistrano Valley in the season opener, the Tritons have only allowed 31 points over the past three games.

However, Mission Viejo is a different animal than the teams San Clemente has taken on this season.

Despite those difficulties, the Mission Viejo offense has soared behind the leadership of sophomore quarterback Kadin Semonza. In four games, Semonza has completed 74.7% of his passes for 1,056 yards and 15 touchdowns with only one interception. Semonza has used a talented trio of receivers in sophomore Mikey Matthews and seniors Mavin Anderson and Joshua Welles. Matthews leads that pack with 30 receptions for 381 yards and seven touchdowns.

Mission Viejo’s strong defensive line will key on Bohls, but it will be up to San Clemente junior quarterback Lachlan van Rosmalen to manage the game, Ortiz said. Van Rosmalen will have to rely on his favorite targets of senior Anthony Hall and BYU-bound Bentley Redden to get the passing game working and create space for Bohls. San Clemente senior Kanious Vaughn will be key to disrupting the Mission Viejo pass attack, as the 6-foot-2, 220-pound defensive end gets one last shot on this biggest stage to sway college scouts.