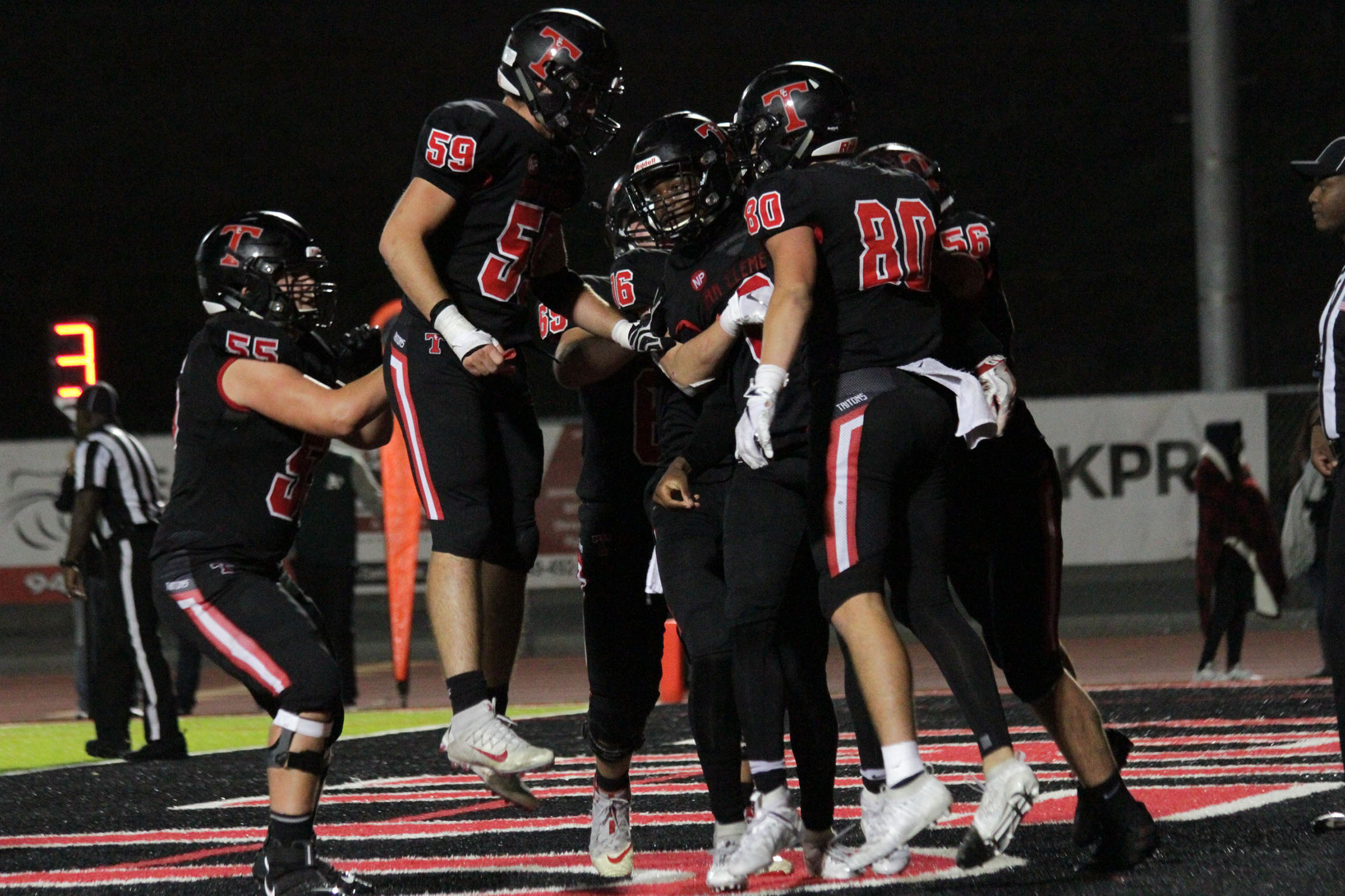 The Tritons and Mustangs slogged it out and exchanged body blows, but neither team could land the knockout strike. It was about gaining an edge, surviving and advancing, and San Clemente found its way through.

Nick Billoups ran for two touchdowns in the fourth quarter, and Preston Rex sealed the game with an interception as San Clemente outlasted Rancho Verde, 13-9, at San Clemente High School.

“We knew it was going to come down to us running the football,” Ortiz said. “In the second half, I thought we controlled the game a little bit, got some stops on defense… That’s what you’ve got to do in those tight games.”

The No. 2 seed Tritons (10-2) advance to the CIF-SS Division 2 semifinals for the first time since San Clemente’s CIF-SS and state championship run in 2016.

The Tritons defense was solid once again as the Tritons held Rancho Verde (10-2) to only two third-down conversions on 11 attempts and made three fourth-down stops in the game.

However, San Clemente struggled stringing its offense together early on as well. The Tritons dropped a pass in the end zone, couldn’t hook up a double pass and got bailed out when a pick-six interception was called back on a roughing-the-passer call.

San Clemente trailed at halftime, 3-0, with only 34 yards of offense.

“These kids did a great job of showing character and persevering,” Ortiz said. “Sometimes when things don’t go your way, it’s easy to crack and point fingers. Coaches and players stayed together and won a tough game. That’s what these playoffs are all about.”

At the end of the third quarter, Billoups finally found a rhythm in the passing game and completed San Clemente’s first third-down conversion of the game in the final minute of the quarter.

That sparked the Tritons as Billoups hit Rex on a 26-yard completion to open the fourth quarter and pushed throgh on a three-yard TD run to get San Clemente on the board and in the lead, 7-3.

On the ensuing drive, Rancho Verde stuck with what was working in the second half and continued to hand the ball off to their star running back Jordan Jefferson.

All night the Tritons had trouble bringing down the thick 5-foot-7 Jefferson on first contact, and Jefferson spun and bounced his way to 201 yards on 32 carries.

“He’s probably one of the best running backs we’ve played all year,” Ortiz said. “He’s a tough, hard-nosed runner. He makes them go. At times we did (stop the run). I don’t think we did a great job mid-fourth quarter, but we made them earn it. “

Jefferson carried the ball nine times on a 10-play drive and broke through on a 27-yard touchdown run to put Rancho Verde ahead with under seven minutes to play. San Clemente blocked the extra point to trail by two points, 9-7.

San Clemente responded with a controlling drive with a balance of Billoups and running back James Bohls. Billoups converted a third down on a 16-yard run and later plunged into the end zone on a four-yard touchdown run and the lead, 13-9.

San Clemente’s two-point conversion failed, and the focus went back to the defense with 1:57 remaining in the game.

The Tritons stopped Jefferson on first and second down to force a third down throw. Rancho Verde chucked up a deep ball that Rex read perfect and undercut the throw for the game-sealing interception.

“We told the kids at halftime that games like this are won in the offseason,” Ortiz said. “The conditioning, the weight room, all the things you do to prepare for the season, that’s when these games are won.”

San Clemente will get its pads back on Monday and prepare for the Mission League runner-up Chaminade.

The Eagles (7-5) are an athletic and offensively potent group that again will give the San Clemente defense all it can handle. However, the Tritons have dealt with that all season and have earned at least one more opportunity at home on Nov. 22.