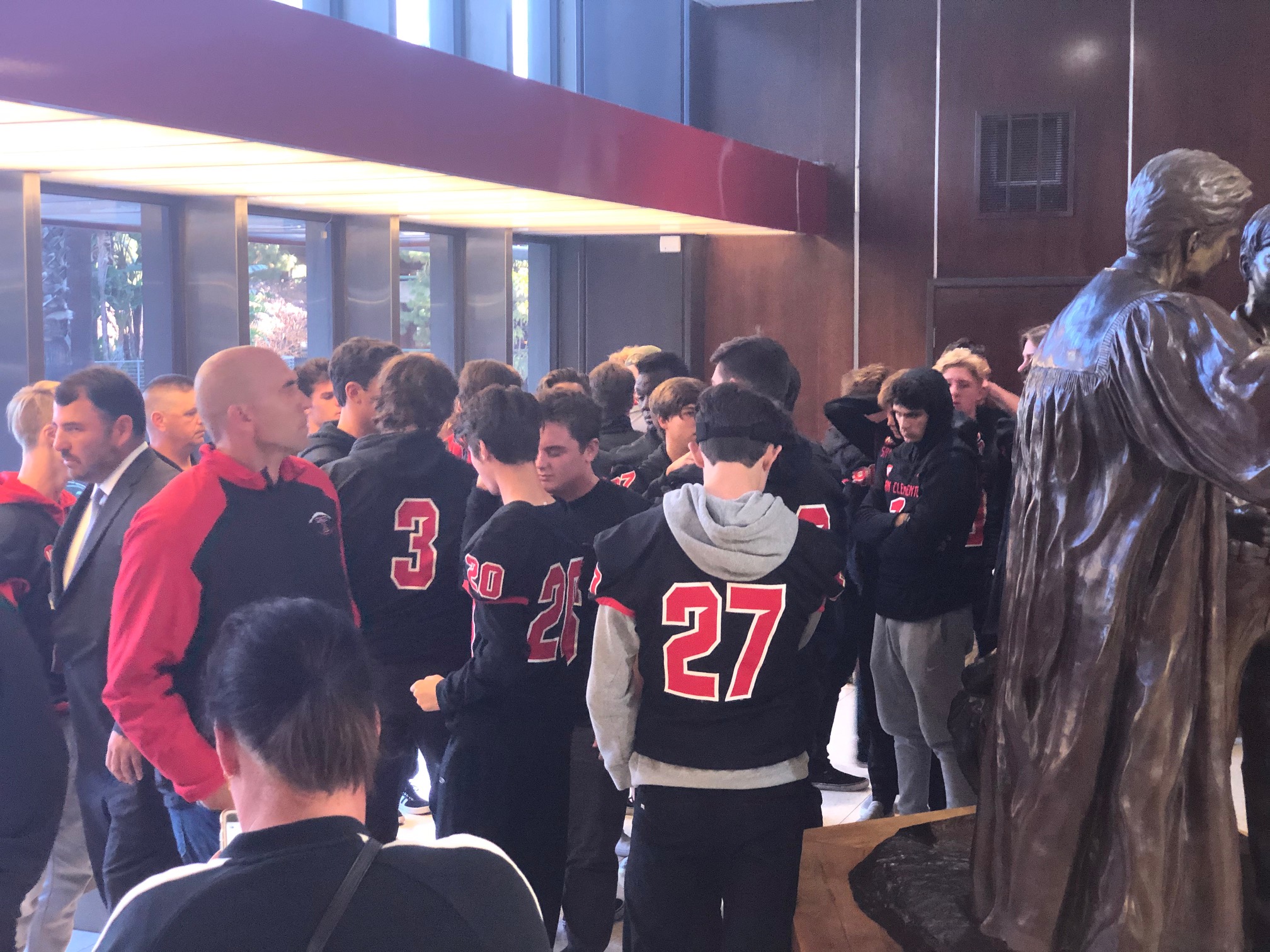 The San Clemente football team’s season ended not on the field but in a courtroom on Friday morning in Santa Ana.

A judge denied the application for a temporary restraining order by a San Clemente football player against the CIF-Southern Section in an injunction hearing at the Orange County Superior Court. The player, senior quarterback Nick Billoups, who attended the hearing along with his mother, was ruled ineligible by CIF-SS on Tuesday for pre-enrollment contact with a coach prior to transferring over the summer.

The decision upholds the CIF-SS ruling that removed San Clemente from the CIF-SS playoffs ahead of its scheduled Division 2 semifinal and force the Tritons to forfeit all of the their games from the 2019 season. With the forfeit, Chaminade of West Hills advances to the Division 2 championship.

“While things didn’t go our way today, I am proud of our entire team, coaches and community,” San Clemente coach Jaime Ortiz said. “I wish Chaminade and Coach Crosen the best of luck moving forward.”

Ortiz, other San Clemente coaches and many Triton football players attended the hearing. The San Clemente team, as well as Chaminade, had continued football practices this week in the event the teams still played their semifinal on Friday night.

“It just feels unfair that our destiny,” San Clemente senior Preston Rex said, “our fate was in the hands of someone else, and we had no control. Sometimes that’s hard to accept what you can’t control. We worked hard, and I still love my brothers. Our team is a family. Nobody can take away what we put in this season.”

The judge denied the application because he found that the mother, Nichole Harris Billoups, did not have the standing to bring forward this issue to the court on behalf of her minor child. Nichole Harris Billoups was listed on court documents as the plaintiff with the underscore of “on behalf of her minor child,” but the judge said the paperwork to present her as the legal guardian for the 17-year-old Nick Billoups was not presented to the judge for the hearing.

The judge also said the case would have still likely been denied on its merits based on the evidence already presented.

“We’re disappointed in what the judge did,” San Clemente-based attorney Thomas Bienert Jr. said. “We think he’s wrong that we don’t have a procedurally proper basis to be here. We also think it was wrong to say that even on the merits, he thinks there’s enough to support the decision, because the decision made, the only one in front of him, was based on few facts.”

Bienert, who represented the Billoupses said that the form for legal guardianship representation was filed last night, and this was unusual to deny the case based on guardianship with the paperwork filed.

“These things are done in one day,” Bienert said. “A normal ex parte is we would’ve come in this morning and had the hearing today. Everything was filed in advance.”

Bienert said there could be an appeal to this decision, but the Billoups family would need to decide on that. Any appeal would be to grant Nick Billoups CIF-SS eligibility for the rest of senior year, if he wished to play other sports, because the appeal wouldn’t be held until next week, which means football season is already lost.

“The issue is the damage is done as of this weekend,” Bienert said. “That’s the whole reason we were here.”

The application for injunction and temporary restraining order was filed on Thursday, Nov. 21 at Orange County Superior Court after the appeal of the CIF-SS ineligibility ruling was denied earlier in the day.

The restraining order would have put a stay on the original CIF-SS ruling and allowed San Clemente’s Division 2 semifinal against Chaminade to be played as scheduled. Ortiz anticipated the game to be moved to Saturday if the order was granted.

The player exercised his right to appeal the CIF-SS decision in a hearing on Thursday at the CIF-SS office in Los Alamitos, but the appeal was denied.

Nichole Harris Billoups filed documents for an injunction on behalf of her minor child, not directly named in the documents due to minor status, against the CIF-Southern Section with a complaint of a violation of the student’s rights to equal protection and due process.

The filing contended that Nichole Harris Billoups was “entitled to a declaration” that the CIF-SS’ ruling was invalid because it was made in an “arbitrary and capricious manner” and without the student being able to initially respond to the allegations and contradicted the evidence the CIF-SS was provided.

CIF-SS and court documents did not name the student involved, but on Tuesday, the day of the initial CIF-SS decision against San Clemente, the CIF-SS website’s listing of the transfer entry for San Clemente senior quarterback Nick Billoups was changed to “denied” and “ineligible” for the rest of the 2019-20 school year. Billoups transferred from St. Anthony’s, a private school in Long Beach, over the summer.

In the court document, Nichole Harris Billoups contended that the CIF-SS used a “vague and ambiguous provision” on its transfer form to rule the student ineligible. According to the filing, the form did not define what a “connection” to the new school was or what made for “communication” with someone affiliated with the school.

According to the filing, the CIF-SS used private quarterback lessons between the student and Troy Kopp as evidence of “pre-enrollment” contact to rule the student an ineligible. The document stated the student contacted Kopp, who is a San Clemente assistant coach and also provides private quarterback skills lessons through the SC Bears program, for three training sessions at San Clemente High School with several other athletes from varying schools in March and April of 2019

The filing explained that while attending St. Anthony’s, the student had aspirations of playing football in college, and to improve those chances, the student attended private quarterback skill lessons around Southern California. It was stated that the student independently contacted Kopp and that the evidence did not establish the student understood Kopp was a coach at San Clemente.

Thus, according to Nichole Harris Billoups’ ex parte statement, the student did not disclose the lessons on the CIF-SS transfer form because he had “no basis or reason to believe” that he had to.

CIF-SS contended in Friday’s hearing that the SC Bears website did mention the Kopp was an assistant coach at San Clemente High School. The San Clemente Times independently confirmed this was true.

Billoups’ lawyers provided evidence of many other players attending various camps before transferring that were ruled eligible to show that, even if the form had disclosed the contact with Kopp, the student would have still been ruled eligible.

CIF-SS contended that was not the case. The CIF-SS attorney said that if the student had filled out the transfer form with the information that CIF-SS would have done a full investigation and still would have ruled him ineligible.

The filing by Nichole Harris Billoups also contended that the CIF-SS infringed on the student’s right to due process by not interviewing the student or “making an attempt to learn his side of the story” before making its decision. It was stated that CIF-SS did not inquire of the student of what happened during the private lessons or if anyone from San Clemente, including Kopp, convinced him to transfer.

The filing does note that the student participated in the appeals process, but it still contends that CIF-SS had already ruled the student and San Clemente ineligible for any more football games before the appeal process.

The document also contended the CIF-SS ruling was not supported by the evidence it had looked over.

The filing said CIF-SS had an email from Nichole Harris Billoups asserting the student’s transfer was not athletically motivated and that the family moved to San Clemente to be equidistant from other family in San Diego and Los Angeles. Nichole Harris Billoups’ ex parte statement said the family moved to South Orange County to be closer to the student’s grandmother, and that the student had wanted to remain in Long Beach.

The email also said San Clemente High School was not the family’s first choice of school in South Orange County for the student. According to Nichole Harris Billoups’ ex parte statement, she and the student’s preferred school was JSerra, a private Catholic school like the student attended in Long Beach, and the only reason the student did not attend JSerra was missing the school’s application deadline.

The document also said that CIF-SS had an email from Kopp in which Kopp denied speaking with the student about coming to San Clemente High School or influencing him to do so.

The document contends that no evidence contradicting either email were presented to the CIF-SS.

Lastly, the document called for an injunction of the CIF-SS ruling because the student would be harmed by not being able to play in Friday’s scheduled semifinal or any other future high school games. The filing contends that the student would be “shunned” by college teams that would scout the semifinal and future games which would “substantially diminish” the student’s chances at playing college football and receiving an education from that college.

The judge ruled this last contention was not supported by the evidence the court had on this case. The judge also contended that he didn’t think a student’s right to play football in the CIF-SS is a right to be protected.