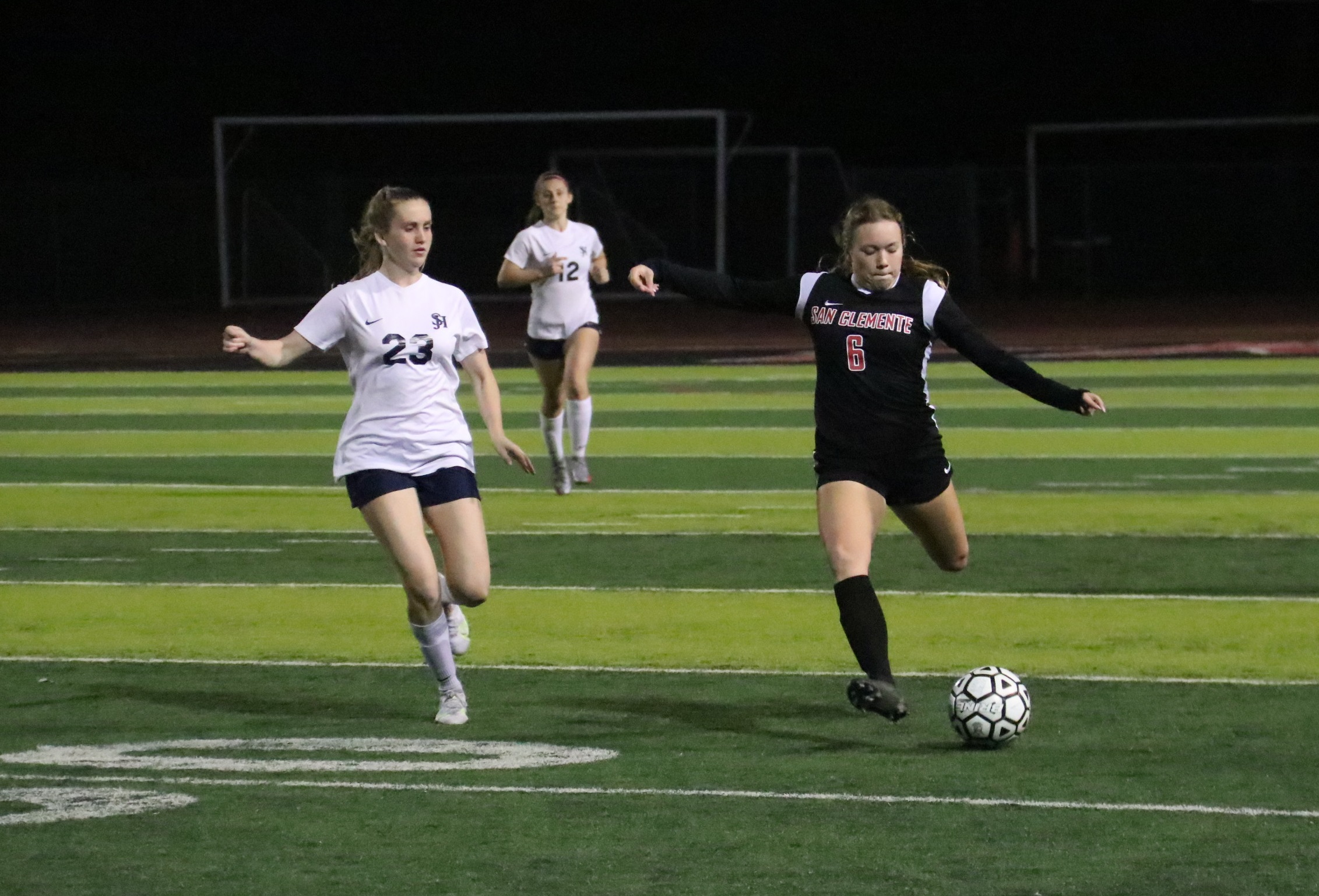 The old saying in American football is that “defense wins championships,” and that maxim extends to the greater expanse of the world’s football, even to the top of the South Coast League’s girls soccer title race.

Defense is clearly the name of the game in the South Coast League, even as teams jostle for the top spot. That point was made even clearer as San Clemente hosted San Juan Hills on Tuesday, Jan. 25.

Both teams traded flurries of chances late in the second half, but time and time again, both teams’ back lines swept away the danger, as San Clemente, ranked No. 8 in CIF-SS Division 1, and San Juan Hills, No. 10 in Division 1, played to a scoreless draw at Thalassa Stadium.

“I thought we had a lot of chances,” San Juan Hills coach Farrel Moore said. “We were just unlucky not to get one tonight, but soccer is like that sometimes. It’s a good battle. It’s always a battle with San Clemente.”

San Clemente remains in the driver’s seat for the league title, and the Tritons could close out the league with a variety of win-draw combinations, depending on how the rest of the league fares. Either way, the Tritons control their destiny starting with a road game at Tesoro on Thursday, Jan. 27, and a home season finale against Trabuco Hills on Monday, Jan. 31. San Clemente will watch the scoreboard on the league’s final day on Wednesday, Feb. 2.

San Juan Hills trails the Tritons by a single standings point, but all the Stallions can do for a league title chance is win out and hope for San Clemente to drop a point somewhere. San Juan Hills hosts Aliso Niguel on Thursday and closes at Tesoro on Feb. 2.

Tesoro is three points behind San Clemente for first, but the Titans have a game in hand on both the Tritons and Stallions. Tesoro hosts San Clemente on Thursday, plays at Aliso Niguel on Monday and hosts San Juan Hills on Feb. 2.

On Tuesday, both San Clemente and San Juan Hills were led by their stalwarts in the central defense.

San Clemente’s Malia McMahon, a UC Berkeley commit, and Abby Succi, a Western Washington commit, were able to sweep away the handful of San Juan Hills chances that entered the box, and they also controlled the pace by jump-starting the offense from time to time. Addie Brislen and Samantha Lee also contributed with wide runs.

“Malia’s pretty big-time. Her and Succi, I’m very lucky to have those two center backs,” San Clemente coach Stacey Finnerty said. “Our whole back line is so solid. The headers they win, the one-on-one battles on the wide. They can attack on the wide. My back line, if I could double them up and have them work both sides, box to box, but they got tired tonight. It was a lot of extra work from them, but I was so thankful they did it.”

On the San Juan Hills side, it was Peyton Leonard as the defensive lynchpin. Leonard was involved in nearly every defensive stop for the Stallions, with blocked shots and singularly winning balls struck deep by San Clemente, as the Tritons began to attack more in the later stages.

“She was outstanding for us,” Moore said. “She’s been a presence for us back there since her sophomore year. Strong in the air, the long throws. She brings a lot of attack and defended really well tonight.”

It was a low-event first half between the two teams, with each earning just one corner kick.

The game picked up around the 54th minute, when San Clemente’s Mia Owens got behind the San Juan Hills defense and tipped a shot on goal, but the shot was saved, and the play was ruled offside.

San Juan Hills got a chance in the 59th minute with a long throw into the San Clemente box, but after a scrum for a clean opportunity, the Tritons cleared.

The intensity truly picked up in the 63rd minute, as San Clemente earned a yellow card for a physical body check as the teams scrambled for a rebound off a long Tritons free kick. The play seemed to invigorate San Clemente, which began its big push.

With the Tritons applying pressure in the 65th minute, Leonard blocked two shots back to back for San Juan Hills, and San Clemente kept coming. Lee knocked a ball into the box, which the Stallions goalie dropped but eventually cleared. Leonard blocked another attempt minutes later.

San Juan Hills followed up with a surge of its own, and the Stallions earned a corner kick in the 78th minute. As the game’s final minutes ticked down, a San Juan Hills corner kick got knocked down in the box, and San Clemente smothered the attempt.

Faith Gillett got in one more good strike for San Clemente, and Lily McLaughlin got another for San Juan Hills. However, both were saved with ease, as the whistle sounded on the scoreless draw.

Going forward, both teams are quite focused on the task at hand. Goals are at a premium, and both teams know they have to up their creativity to break through. They both also know who they are as defensive units and are ready for the stretch run and playoffs after that.

“This team, they want it,” Finnerty said. “Their heart is there. They have the character to do it. It’s not too much of a challenge to keep the focus for the win.”