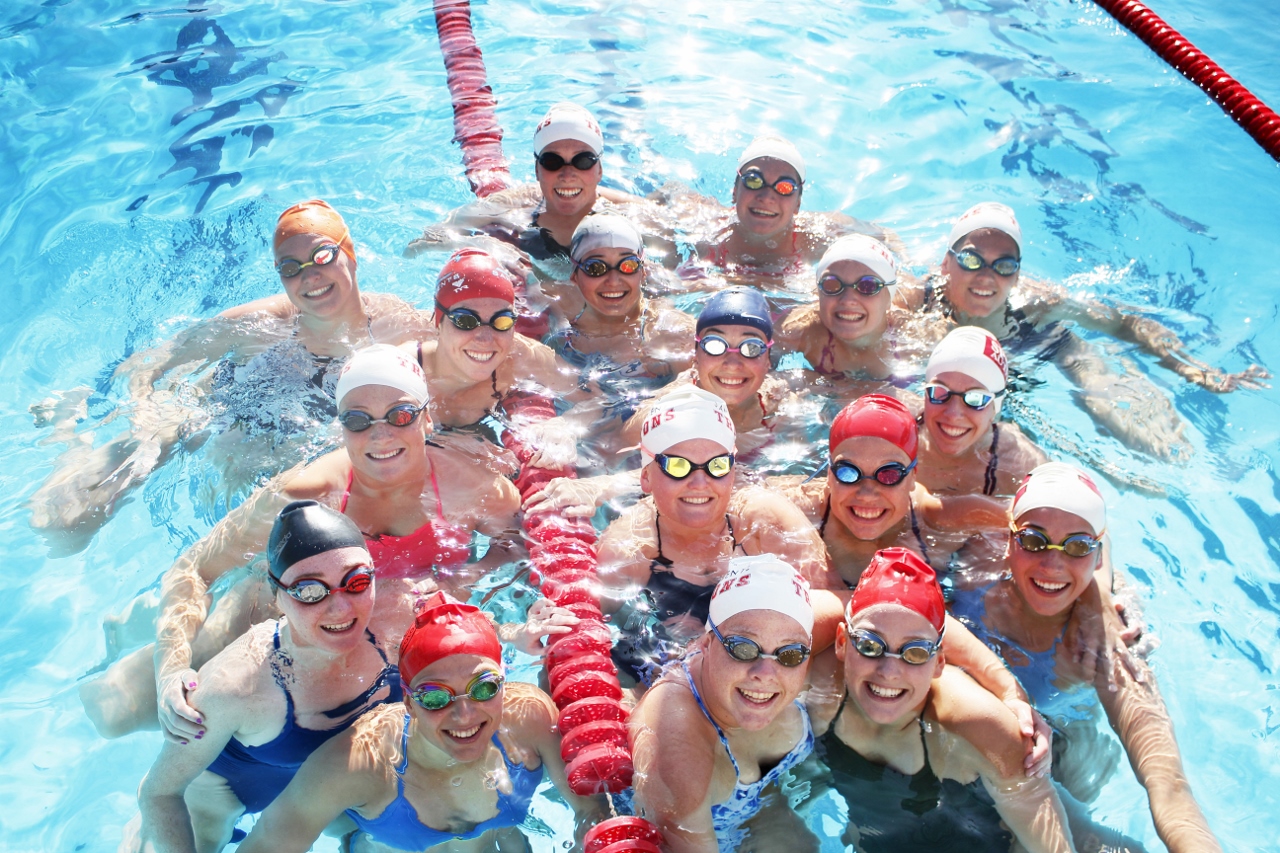 The spring preps season is underway at San Clemente High School. In our annual preview, we feature all of the Triton programs that will be in action this season.

For in-game updates, scores, news and more for all of the San Clemente spring sports programs, follow us on Twitter @SouthOCsports.

The San Clemente baseball team is looking to bounce back from a tough league campaign and a first-round exit from last year’s CIF-SS playoffs. The Tritons will be well-rounded enough to do so as evidenced by a 5-0 start.

“We have a very good offensive team,” San Clemente coach Dave Gellatly said. “We’re going to be good defensively. I think the big question mark coming into the season was our pitching. Based on our first three games, they’ve done a very good job. They’ve surprised in the early going.”

San Clemente has scored five or more runs in three of its first five games and hasn’t allowed more than two runs in those games.

Senior Mike McGreevy gets things going for the Tritons as the lead-off hitter, starting shortstop and No. 1 pitcher. McGreevy has a home run as well as two wins in five games.

Senior Jeff Bruyntjens will be a big offensive key in the No. 3 spot and has two home runs and seven hits in 13 at-bats so far.

Senior Charlie Loust will control the pitching game behind the plate at catcher.

The Tritons pitching has thrown to contact and allowed a stellar defense to do its work.

San Clemente plays in arguably the toughest league in Division 1, but Gellatly thinks his team has what it takes to succeed.

“On paper, based on the rankings, we’re supposed to be the last place team,” Gellatly said, “but I don’t think that’s what’s going to happen in the long run. I think we’re capable of beating anyone on any given day.

The San Clemente boys golf team had a strong finish last season and will look to build on that in 2018.

Last season, four Tritons advanced to the CIF-SS individual competition out of the South Coast League finals. San Clemente had four of the nine league representatives in the tournament.

The leader for San Clemente is senior Alex Pak. Pak finished second in the South Coast League, fifth at CIF-SS and qualified for the Southern Regional tournament.

Junior Christian Wentzel will also be a key player for the Tritons.

Second-year coach Marc Parker will look to keep San Clemente as competitive as always in a tough South Coast League.

The San Clemente boys lacrosse team lost 18 seniors to graduation from another league championship group last season, but coach Brendan Finnerty still has a lot of expectations in his second season with the Tritons.

“We want to win,” Finnerty said. “I didn’t come down to San Clemente not to win championships, I can tell you that much. I don’t want to call this a rebuilding year, but when you lose 18 seniors, it kind of has to be.”

The defense is a big strength for San Clemente with several returners including juniors Dylan Hartanov and Nick Amico. The consistency of the defensive group will be a rock for the Tritons.

On offense, there will be some changes as players step up and the philosophy changes. Finnerty said that San Clemente will focus on ball movement and rotations to slow the game down and take smarter opportunities.

Senior Branden Wilson is the lone captain for the Tritons, and Finnerty is excited to have the speedy attackman back in the fold. Junior Liam Nelson scored six goals in the Tritons’ only game this season, a 10-8 win over Thousand Oaks on Feb. 24. Junior Jake Brannon will be relied on at the face-off.

San Clemente girls lacrosse Josh Cain said he hopes his team won’t miss a beat from its 15-4 overall and 8-0 league championship season a year ago.

The offense is carried by a group of seniors and the defense is bolstered by a group of rising juniors as the Tritons look to build on last season’s quarterfinal finish.

“At this point, there isn’t too much new to teach them,” Cain said. “They know what to do, and now it’s all about executing. It’s about minimizing those mistakes and just really working to play that perfect game of lacrosse.”

San Clemente graduated several seniors from its defense, but junior Catherine Yubeta and sophomore Gabriela Perez have already stepped up to keep things clicking on the back end.

The Tritons are 2-1 to open the season with wins over Los Alamitos, 10-7 on Feb. 24, and Laguna Hills, 15-8 on March 6. San Clemente has nonleague tests at home against San Juan Hills on Saturday, March 10 and Foothill on Tuesday, March 13 before opening league at Mission Viejo on Thursday, March 22.

The San Clemente softball team has had a strong start in 2018 after a disappointing 2017 season.

Dana Hills was county-ranked in the preseason, and San Clemente pulled out a late win with three runs in the sixth inning.

The Tritons have three seniors that are signed on to play with universities next season. Lily Aasland will play at Bryant, Grace Krantz at Harvard and Mikaela Gandia-Mak at Hawaii-Manoa.

The San Clemente boys swim team is building off of a great season from a year ago, but the Tritons are still on the hunt for one more thing.

“Our open team won every meet (last season),” San Clemente coach Thomas Dollar said. “JV won every meet. Varsity won every meet except Laguna Hills. That’s the team we’ve got to beat. It’s going to be trying to get that one victory we need, that missing piece to get that league championship.”

The Tritons are looking for their first league title in over 10 years, but they might have what it takes with good all-around depth and two stellar senior leaders.

Boston Williams, bound for Cal Poly, San Luis Obispo in the fall, is a powerful force. Williams has already hit a personal best in the offseason and Dollar expects another drop to come. Williams will swim the 100-meter freestyle, 50-meter freestyle and 100-meter butterfly.

Weston Rowan, a University of California-Santa Barbara signee, is also coming back strong for the Tritons. Rowan will swim mainly in the 200-meter individual medley and 100-meter backstroke.

Like their male counterparts, the San Clemente girls swim team is looking to build and add a league championship to its ledger.

“We’ve talked about how boys and girls water polo have won league,” San Clemente coach Brad Kerr said. “We’re looking to put another couple numbers up on the board and have a really strong year for aquatics.”

Kerr said he has a motivated and hard-working group that has standouts at nearly every level.

Senior Marley Macarewich returns as the captain for the Tritons and will swim in the 100-meter butterfly and medley relay. Senior Mia Edwards also returns in the backstroke.

With seven consecutive league titles in hand, the San Clemente boys tennis team will look to round out the streak to eight in 2018.

The Tritons have the talent, but San Clemente still needs to work out some early season kinks if they are to contend again.

“We have close to what we had last year,” San Clemente coach John Stephens said. “Our doubles are a little bit behind where we were last year. Singles are as strong as we were last year. We’ve got four seniors that are starting, and we’re counting on them to pick it up as the season goes on.”

San Clemente’s experience lies with its doubles groups. Caden Spenser, Devin Ursem and Michael Tilly will be the leaders here.

At singles, the Tritons’ No. 1 and No. 2 are both sophomores in Cory Angeli and Griffin Wolfe. Both gained valuable experience as freshmen in San Clemente’s league championship run.

When the Tritons return to league play, Stephens expects Tesoro to be the main challenge this season. Dana Hills had been the contender, but Tesoro has gotten stronger as Dana Hills has dropped off a little this season.

The San Clemente boys track and field team got a rude welcome to the South Coast League last season.

After years of Sea View League dominance, the Tritons finished last at league finals a year ago, but there is still plenty to pay attention to on the oval. The star for the boys track team will be senior Jack Shippy. Shippy is committed to University of California-Davis as a football player, but he is extremely valuable in various events for the Tritons. As a junior, Shippy finished third at the South Coast League finals in the 100-meter, 200-meter and long jump.

Shippy qualified for the CIF-SS preliminaries in all three disciplines and advanced to the CIF-SS finals for the long jump where he finished eighth.

Relays are also a place to look for San Clemente with seniors Nicholas Hernandez and Hayden Sanders joining Shippy on the 1,600-meter relay.

Despite a fourth-place finish at the South Coast League finals last year, there is plenty to be excited about for the San Clemente girls track and field team.

Emilie Bennett returns in the sprints where she finished second in both the 100-meter and 200-meter at league finals as a sophomore. Her relay teammate senior Rylee Kerr is also a name to watch in the 400-meter.

San Clemente has always prided itself with its distance running program, and this year is no different.

Senior Chloe Patterson is a name to watch in the hurdles.

San Clemente boys volleyball coach Ken Goldstone was close to hanging it up at the end of last season.

“I retired from teaching in June and had thoughts of giving it up,” Goldstone said, “but the kids that were coming back are such great kids. I thought if we start working now we might have a shot.”

For a team that lost nine seniors to graduation from a league championship group, a lot of work had to be put in through the fall, but the Tritons put in that work and are ready to go this spring.

Seniors Connor Mateer in the middle and Kyle Burick at opposite are the two returners from last year’s varsity team that will have big roles for San Clemente.

Junior Marc Monier is the team’s top outside hitter and junior Cole McDaniel will be key as the setter.

“We have a little more experience in the pin positions,” Goldstone said, “but we’re pretty green all the way around. We’re athletic and play hard. We’re a pretty good ball control team considering how young we are.”

San Clemente is 5-1 to start the season and opens its league title defense on Tuesday, March 27 at home against Dana Hills.