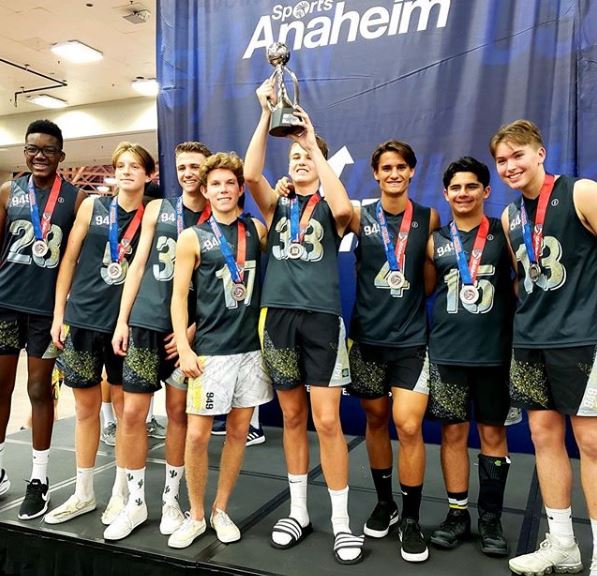 The 949 Volleyball Club, based in San Juan Capistrano with athletes from all over South Orange County, earned a silver and three bronze medals at the USA Volleyball Boys Junior National Championships in Dallas from June 30 to July 7.

The 949 Boys 16s won their first 10 matches of the tournament dropping only three sets on the way to the 16 USA division championship game. In the title game, MAVS Volleyball of Kansas City swept 949 in two sets to take the title. MAVS pulled the reverse of 949 in winning 10 straight matches after losing their opener. The 949 16s won the bronze medal as 15s last year.

The 949 Boys 14s had a similar opening run to the 16s with wins in their first nine matches of the 14 Open Division tournament with only three lost sets. In the semifinals, local rival Balboa Bay Volleyball Club of Newport Beach swept 949 in two sets, and 949 settled for bronze.

The 949 Boys 18s took a bronze medal with a loss to Balboa Bay. The 18s went 8-1 in group play with only four dropped sets, but 949 was again swept in two sets in the 18 Open Division semifinals. The 18s finished fifth last season as 17s.

The 949 Boys 17s dropped just three sets in group play for an 8-1 record. The 17s lost their second match and then won seven in a row on the way to the 17 Open Division semifinals. 949 was taken down in two sets by Southern California Volleyball Club of Redondo Beach. The 17s earned bronze last season as 16s.

The 16U and 18U teams qualified through the Southern Pacific Zone tournament from June 21-23 at the Woollett Aquatics Center in Irvine.

The San Clemente Girls 16U team opened big with a 17-2 win over CHAWP Blue, and the Tritons followed up with a 12-8 win over Huntington Beach. San Clemente dropped a tight semifinal against SoCal Black, 7-5, to drop to the third-place game. The Tritons knocked off CHAWP White, 9-7, to claim bronze.

The OCWPC Boys 18U Blue dominated their opener with a 21-0 win over Patriot. OCWPC Blue had a strong win over Northwood, 11-8, and edged out Vanguard in a shootout tiebreaker, 9-9 (5-4). In the quarterfinals, OCWPC Blue knocked off Ohana, 17-6, but Newport was strong in the semifinals to beat OCWPC, 16-12.

OCWPC Blue came back to beat Vanguard again in the third-place match, 13-6, and take bronze. The OCWPC 18U Red team finished 10th.

The OCWPC 16U Blue finished fourth at the Southern Pacific Zone Tournament.

The San Clemente Little League 8/9-year-old National team, which won the District 68 championship on July 2, continues its postseason run in the Section 10 tournament on Saturday, July 13.

SCLL opens against the District 55 champion at 10 a.m. at the Ocean View Little League Fields in Huntington Beach. The winner will take on the District 62 champion on Sunday, July 14 at noon.