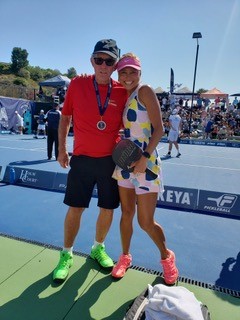 San Clemente was the focus of the pickleball world from Thursday, June 24, through Sunday, June 26.

The Orange County Cup of the Professional Pickleball Association was contested at Lifetime Fitness Rancho San Clemente, and the event and venue garnered rave reviews.

Nearly 1,000 athletes competed in front of an estimated crowd of more than 3,000 spectators over the course of the tournament, and more than 300 medals were handed out in 136 overall events. There were numerous divisions of varying skill levels and demographics, with men’s, women’s and mixed doubles competitions in all the divisions.

The main events were the open divisions, in which some of the sport’s top players came to San Clemente to showcase their skills, as well as take home some hardware and part of the $65,000 prize payout.

In women’s singles, Lea Jansen, the No. 5 women’s singles player, won her first PPA title. The No. 2, 3 and 4 players were all upset, which opened the road for Jansen to take the title in a tough five-set match.

In women’s doubles, Jardim paired with the other women’s No. 1 doubles player, Lucy Kovalova of Slovakia, and they walked through their bracket before a four-set championship win.

The Professional Pickleball Association’s next event will be back in Orange County at the Takeya Showcase on Aug. 5-8 in Newport Beach.

The PPA will likely return to San Clemente in the future, as well, thanks to the rousing reception it received this weekend.