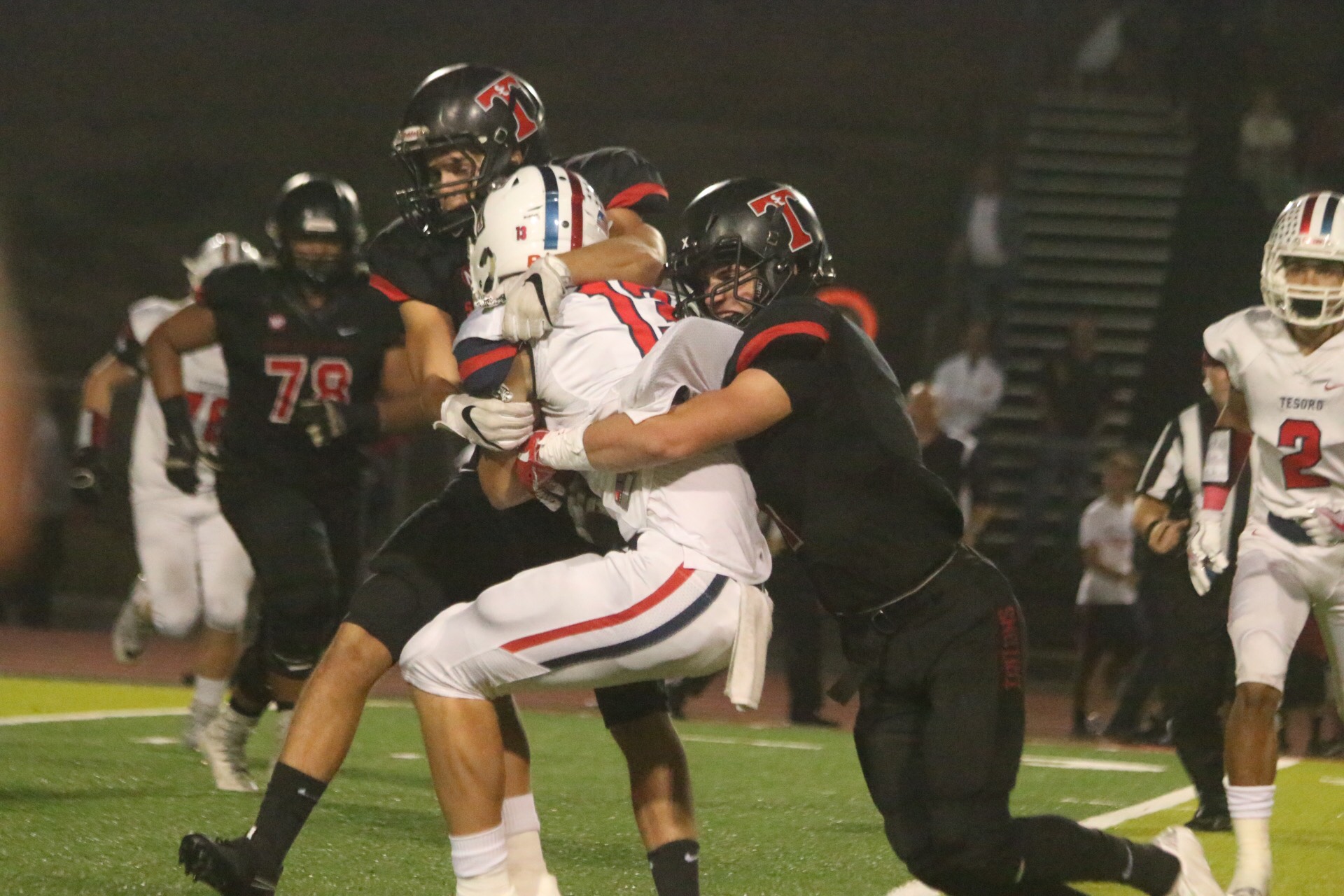 Behind a strong second-half performance, the San Clemente football team came back to beat Tesoro 30-14 at home on Friday night in the Tritons’ South Coast League opener.

San Clemente, which trailed at the half in a game for the first time all season, scored on three of its four second-half possessions and the defense blanked the Titans over the final 24 minutes while recording two takeaways.

The second-half effort allowed the Tritons to pull away from what had been a one-point game at the midway point.

“We looked slow in my opinion in the first half,” San Clemente coach Jaime Ortiz said. “I think we flew around the ball a little better, made turnovers and put ourselves in a position to be successful.”

After Tristan Trager kicked a 28-yard field goal to make it a two-score game in the third quarter, San Clemente running back Austin Whitsett erased any chance of a Tesoro comeback with a spectacular 20-yard touchdown run that gave San Clemente a 30-14 lead with just over four minutes to go. Whitsett was a wrecking ball all night, piling up a season-high 148 yards on 24 carries to go with his touchdown.

San Clemente quarterback Brendan Costello threaded a 28-yard touchdown pass to Jay Baggs to kick off the third quarter, staking the Tritons to a 20-13 lead it would not let go of.

Senior defensive back Branden Wilson intercepted Tesoro quarterback Chase Petersen just before the end of the third quarter. San Clemente’s Matt Waskowski intercepted a pass on a Tesoro gadget play in the fourth. The takeaways killed what little momentum the Titans had with them.

“We came out sluggish in the first half but in the second half we wanted it more than they did,” Wilson said. “Our defensive backs are full of speed and that’s how we play.”

San Clemente may have been cruising in the second half, but the first half was a different story. Tesoro was neck-and-neck with the Tritons thanks to the big-play ability of its quarterback Chase Petersen.

Petersen tossed a 40-yard strike to John Cody, who caught the ball while falling down, setting up a 10-yard Cameron Lambi touchdown run two plays later. The sequence tied the game 7-7 in the second quarter.

The final minute of the first half was packed with action.

First, Costello burst up the middle for a 20-yard touchdown run, bouncing off two defenders on his way to the end zone to give San Clemente a 13-7 lead.

But the Tritons’ advantage was short-lived.

Tesoro jolted to life when Kyle Schaefers returned the ensuing kick 77 yards down to the Triton 23-yard line. One play later, Chase Petersen hit Seth Gilmore in stride for a touchdown and the Titans took a 14-13 lead with just 16 seconds remaining on the board.

Costello completed 19 of 35 passes for 226 yards and a touchdown. He also rushed the ball seven times for 58 yards. He completed passes to eight different receivers. Bryce Wilson had a game-high six catches for 53 yards.

San Clemente, which has won 13 consecutive games dating back to last season, will travel to play San Juan Hills in a league game next week.