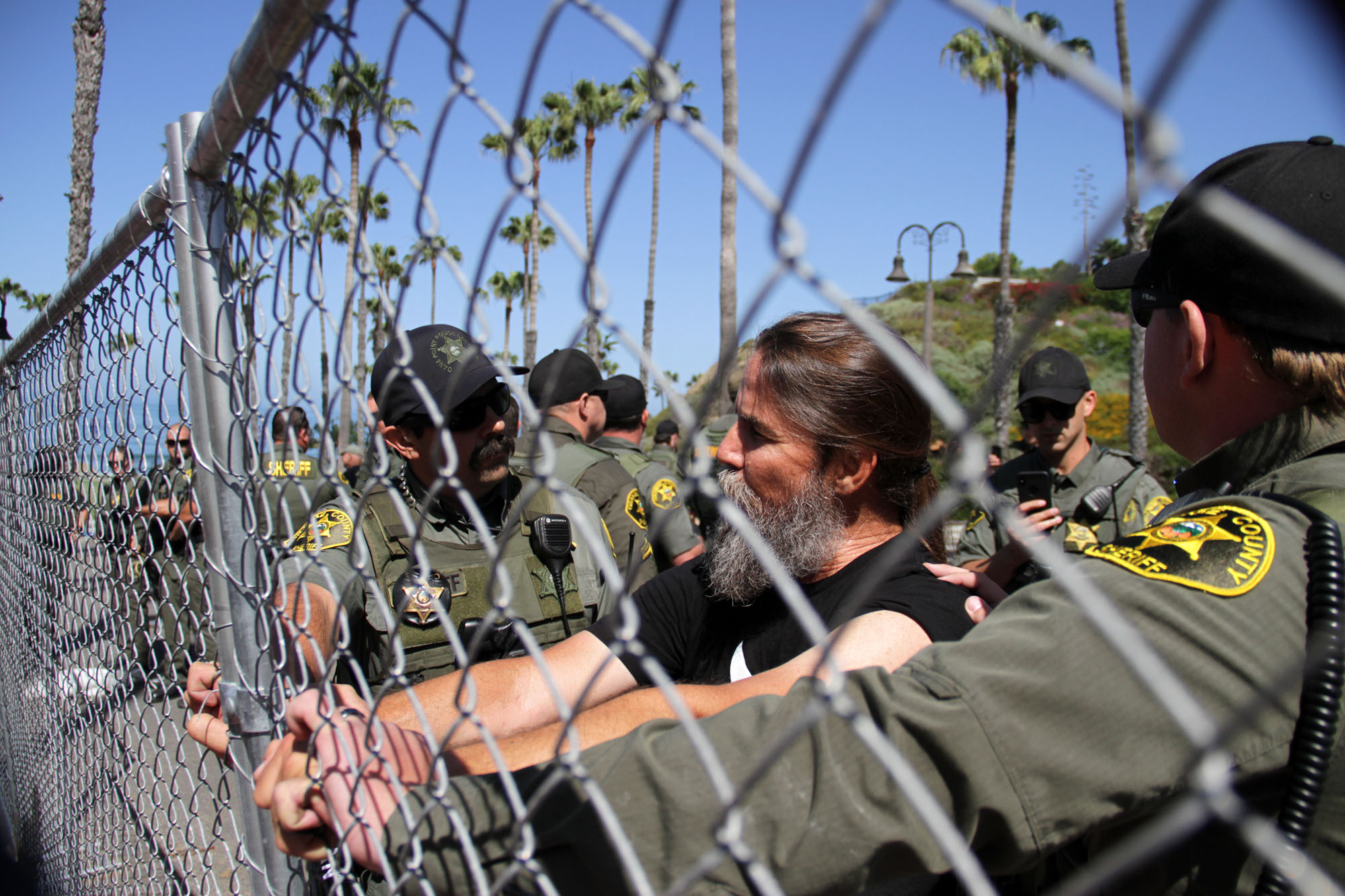 Seeking Court’s Dismissal, Hostetter Claims to Have Been Target of FBI Operation

San Clemente resident and U.S. Capitol riot defendant Alan Hostetter is asking the court to drop the case against him because, he claims, he was the target of an FBI counterintelligence operation that used several of his own former associates as informants.

In the latest court filing this week, the former La Habra Police chief and yoga instructor said the charges against him, including conspiracy and obstructing an official proceeding, were the result of “outrageous government conduct.”

For roughly 80 pages, Hostetter accuses several of his former allies, law enforcement officers, as well as a local artist of covertly working as government operatives assigned to infiltrate and surveil the American Phoenix Project, a group he started to protest pandemic-related restrictions.

Hostetter, in his Dec. 6 motion, further alleged that some of his associates worked with law enforcement to stage and amplify their own arrests during anti-lockdown rallies. He also speculated that the alleged informants may be working with secret societies, like Freemasons and Skull & Bones, or religious groups such as Scientology and Mormonism.

Hostetter this past June was one of six people arrested on federal conspiracy charges in connection to the Capitol riot in Washington, D.C. on Jan. 6. He was indicted on charges that include conspiracy, obstructing an official proceeding and unlawful entry on a restricted building or grounds.

Federal prosecutors have accused Hostetter and co-defendant Russell Taylor of being part of a group of rioters who pushed through a line of police officers on the Lower West Terrace of the Capitol and had urged others to follow.

Through the American Phoenix Project, Hostetter and Taylor organized marches against COVID-19 lockdowns and led rallies to burn face masks in San Clemente and other Orange County cities last year.

Hostetter, a staunch supporter of former President Donald Trump, also organized “Stop the Steal” rallies in California, as well outside the U.S. Supreme Court the night before the march on the Capitol.

Hostetter in his motion denied the claim, arguing that the group was started to “protect the constitutional rights of all Americans,” was “not a militia group” and “has not engaged in any criminal activity.”

“Defendant, at no time prior to arriving at the Capitol, had made any plans with anyone to commit an illegal act, nor did he have any intention of moving past any police perimeter lines or disrupting the proceeding inside the Capitol Building,” Hostetter said in the court document. “The only plan or intention that day was to peacefully and lawfully protest a stolen election.”

Hostetter’s motion comes on the heels of U.S. District Judge Royce C. Lamberth granting the defendant’s request to represent himself in court.

According to the indictment from this past June, Hostetter made plans to attend the Jan. 6 rally that Trump had tweeted about on Dec. 19, 2020.

“I will be there, bullhorns on fire, to let the swamp dwellers know we will not let them steal our country from us,” Hostetter wrote from his American Phoenix Project Instagram account the same day. “I hope you can join me!”

While Hostetter, Taylor and the other co-defendants were making travel plans for the Jan. 6 march, prosecutors allege, the men shared details about “gear” and weapons and firearms they were planning to bring on their cross-country road trips.

The prosecutors cited text message exchanges between Hostetter and Taylor in which they discuss whether to bring firearms.

Hostetter, however, explained in his motion why march-goers would need to bring weapons, and other communication devices such as walkie-talkies to the rally: counterprotests from Black Lives Matter and Antifa.

“Defendant believed that any discussions or messages being circulated by others and about carrying ‘personal protective gear’ that day had to do with being able to defend oneself against a possibly violent and large BLM/Antifa counterprotest that might occur thereby placing Trump supporters in physical danger,” Hostetter’s motion stated.

In his motion, Hostetter outlines the numerous protests he organized in San Clemente and elsewhere over the course of the pandemic, as well as details his encounters and relationships with several of his allies whom he’s now accusing of being government operatives.

One such ally Hostetter believes to be an informant is Taylor. Hostetter went as far as to claim, without evidence, that Taylor worked with a government handler to determine which route to take onto the Capitol grounds.

“Taylor was defendant’s friend at the time so defendant joined his friend and followed him. Not having any idea where Taylor was headed, other than generally in the direction of the Capitol building, defendant simply followed him,” the motion stated, and later added, “In hindsight, the route Taylor was leading defendant along was suspiciously clear and with few people blocking the route.”

As of this posting, Taylor’s attorney Dyke Huish could not be reached for comment.

In another section of the motion, Hostetter also claimed that his arrest in May 2020, when he led a protest to remove fencing around the Pier Bowl parking lot, was staged by the FBI and local partners to create a “‘radical domestic terrorist’ aura around” him.

During the May 2020 protest, Hostetter had clung to the fence while officers held his arms in place. Hostetter remained in place for more than an hour while the bulk of the protesters crowded the sidewalk in front of him for support, as well as to chant and berate the officers.

“So, what we would see in a typical passive resistance-type stance is somebody that is in violation of law but is not actively fighting deputies,” Capt. Jeff Puckett of the Orange County Sheriff’s Department explained to reporters the day of the incident.

Hostetter is facing separate charges connected to his arrest at the Pier Bowl parking lot protest.

There are no court hearings currently scheduled for the case, according to court records.