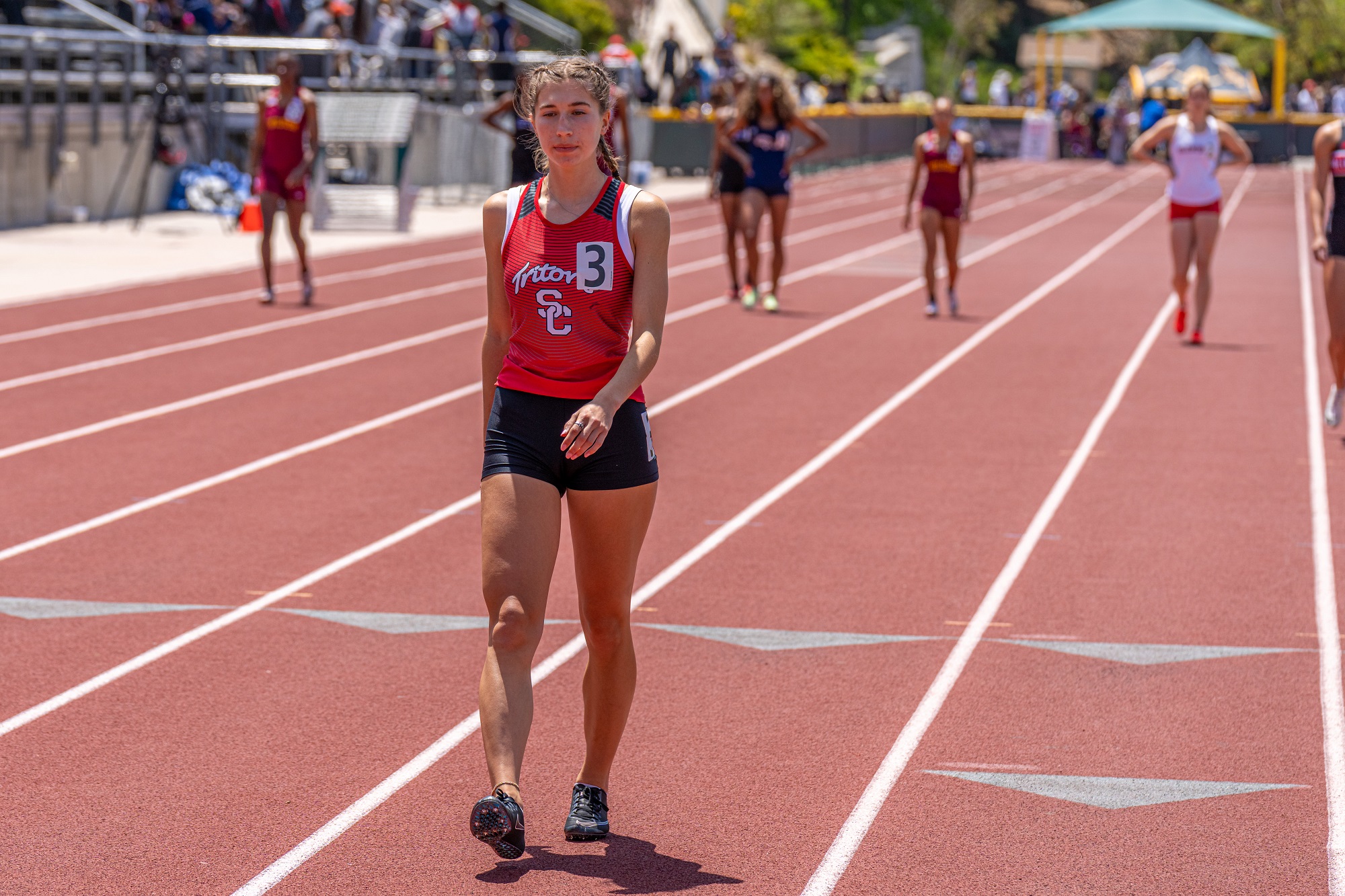 Little by little, the competitive field gets whittled down over the course of the California track and field season.

San Clemente’s track and field program qualified 19 entries out of the Sea View League to the CIF-SS preliminaries, only six to the CIF-SS Division 1 Finals and just four to the CIF-SS Masters Meet.

“It’s definitely exciting,” Hawkes said. “Definitely bittersweet, because it’s the end of my senior year, but it’s going to be really rewarding, because I feel like I’ve worked really hard. To get to State is just an honor in itself.”

Hawkes will be in the first of three preliminary heats of the 400, and she’ll have plenty of motivation to be pulled to the finish and into the final. Hawkes will be lined up directly next to the state leader in the 400, Takiya Cenci of Clovis North, who ran a time of 53.40 at the Central Section Masters.

The 400 prelims will run at 6:50 p.m. on Friday, with the three heat winners and the next six best times advancing to Saturday’s final.

While Hawkes concedes she hasn’t completely run her best races over the course of the postseason, the Montana State-bound senior has done enough to keep advancing, and her run at the Masters Meet was her fastest 400 time since she clocked her personal record of 55.20 seconds at the Mt. SAC Relays on April 16.

“I feel like these last few weeks, I haven’t gotten any PRs (personal records) or anything, so I’ve just been running what I know I can run,” Hawkes said. “It hasn’t been anything new, so it’s been a little disappointing, but it’s also really gratifying to see that I’m being consistent and running what I can run.”

This postseason has also brought a different goal and a different pressure than any before for Hawkes. As a sophomore in 2020, there was barely a regular season and no postseason at all due to the COVID-19 pandemic, and the state meet wasn’t held in 2021 due to continued COVID-19 concerns.

So, for the first time, Hawkes has been able to set her goal to make the state meet and push herself to get there.

“This year has been a little more stressful,” Hawkes said. “Last year, it ended at CIF Finals, and that was that, but now you know you’re going to be running for another three weeks, so you have to be a little more mentally prepared and tougher.”

Being able to finish her Triton career at the CIF State Championships is the culmination of four years of work—her only four years running competitive track and field.

“I always knew I was fast, but I was focusing on soccer,” Hawkes said of her early athletic career. “I quit soccer my sophomore year to focus on track, but my freshman season for track, I knew I wanted to run track in college.”

It’s easy to see why track and field gripped Hawkes in her freshman year—because she was good at it. In 2019, Hawkes won the 200-meter sprint and finished second in the 100-meter sprint in the frosh-soph races at the Orange County Championships, and she finished second as an individual in the varsity Sea View League finals in the 200 and 400 to qualify for CIF. Hawkes also ran the second leg of the league champion 4×400-meter relay team.

Neither Hawkes nor the relay team advanced out of the preliminaries, but it was enough to get the young sprinter bitten by the running bug.

“The work you put in, you get out,” Hawkes said of her love of running. “It’s cool to have a sport where you’re pushing your body to the limits just to see how hard you can push, how fast you can go.”

San Clemente assistant coach Kevin McCarthy, who is Hawkes’ individual coach and is also retiring with Hawkes’ state appearance after 46 years in track and field coaching, said Hawkes is smart about how she runs and understands the specific techniques needed to run the 400, the longest of the sprint races.

“Normal kid, when they get tired, they’re going to quit,” McCarthy said. “You have to train through the year to learn how to get through the hurt. She knows when she’s hurting, she has another gear, because she knows how to relax.”

As Hawkes’ Triton career comes to an end and she prepares to move on to Montana State in Bozeman, Hawkes looked back on what she appreciated most from her San Clemente High School experience. While track and field can be an individual sport with plenty of individual pressure, Hawkes most appreciated her actual family and her Triton family.

“Definitely just the team environment,” Hawkes said, “and it’s not just specific to San Clemente, but having my parents at all the meets, and my family there. San Clemente is such a community. It feels like you know everyone, and it’s so supportive and positive.”

Hawkes will continue to get that support as she moves on to Montana State, as she enters as one of 20 in a large recruiting class headed to Bozeman. But she’ll receive the support one last time in red and black this weekend in Clovis.